On Dangerous Ground: Woman On the Run (Norman Foster, 1950), "One More Thing" (Apologies to Columbo). 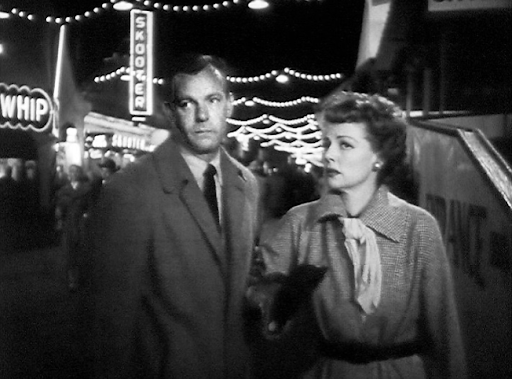 fate, not unlike Pinocchio ogling the Fat Lady before

celebrating insinuation, or, better yet, the benefits of

coupons into letterbox conspiracies. Others say only

movies make it real, concentrating the mind on guilt

rather than gelt. Leaving idle hands and loose ends to

track some alienated dog walker, thrust into the numinous

far from where Kid Schlemiel once shared a joint with

Janis Joplin, who, for all I know, was in fact Daffy Duck

in disguise. Or is that stating the obvious? One person's

truth being another's collective amnesia. But, yes, the man

on the leash, marriage on the rocks, would have been

better off  had he allowed his mutt to simply crap on

the carpet. Yet any deliberation over whose tail is wagging

what dog can only be speculative. That mask of civility

frozen at the seams, Mrs Dog Walker totes the medicine

that might alleviate her husband's frozen heart. But loyalty

only goes so far; it's not that she wants him dead, just out

of the way. Even if the guy she confides in is not now,

nor ever has been, a confirmed newshound. Still, he speaks

in complete sentences and treats her as if she just might

actually qualify as human. But tattoo this: never fully

a woman seriously. As for Foster, his bona fides are

themselves slightly suspicious, from the Mercury Players

to Mr Moto and Charlie Chan. Schlepped his puny budget

from L.A. to San Francisco to hoover the city's crevices.

Call it psycho-geography, but only if emphasising the prefix

of that neologism. As if the gaffer might have been stealing

glances at Schlemiel's tear-stained Baedeker, to give him

license to prowl the city like a wounded coyote woofing

and warping at every pit stop. Either smart before its time

or retrograde after the fact, its laws and stipulations bleed

the Avenues to the zoo and ocean. Holy smokey eyes,

what politics of inevitability do not decry le bon temps

is not the story, the narrative barely the end of the matter. 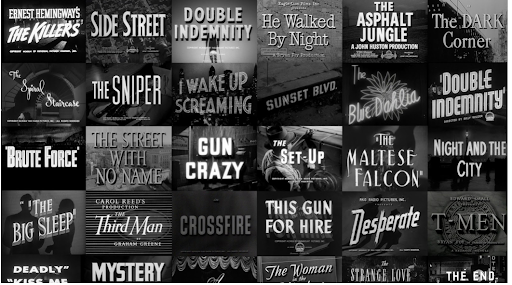 Adjectives like floating insects in a Hollywood swimming pool.

So 1950s, larger than life, inflated by superlatives. Magnified to

billboard proportions. Though these days big would be biggest.

Leading to the inevitable, if ambiguous: The Biggest Sleep: perhaps

a euphemism for the most boring movie ever, or could it be a pill

to get you through a troubled night? The Biggest Clock, a travelogue,

the Strip or the world’s largest aggregation of musicians. Back then

big really did mean something. Like, before the first feature, a Big

Boy to forget the Big One, before the final shrug, as in big fucking

by cigar-choking expressionist emigrés, their motto: I shot therefore

I was. Time leading to paranoia, perversion to crime, and sleep,

not orgasm, the little death. That coffee thrown in Gloria’s face a

reality only when she clocks herself in the mirror. A woman with

a scar, sister under the mink, more dangerous than a gun or an

explosion. The mark so deep it becomes irredeemable. Which helps

explain why it's always night in high-contrast simulacra. Why in

the land of the minuscule, a less than average shyster can so easily

become king. That is, if size matters, if modifiers have more import

than that which they modify: Clock, Combo, Heat, Sleep, Steal,

Night, Knife, Goodbye. This one goes out to who would remain

anonymous, their ships lost at sea.  Continents long since absent,

as insomniacs out of the past darkly. Falling adjectives like confetti

between more frames per second than reality can ever hope to count.