The Long Half-Life of Proletarian Prose: On Michael Gold and Maxwell Bodenheim 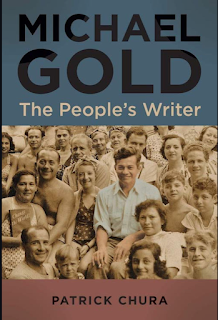 PERHAPS IT’S NOSTALGIA that has allowed proletariat writing to enjoy a half-life that defies its poor reputation. Though few literary sophisticates read the likes of Jack Conroy, Meridel Le Sueur, Jim Tully, or Tom Kromer, the fallout from such writing, abundant and popular prior to and just after World War II, remains with us in various guises. There are elements of it in noir and hard-boiled fiction, past as well as present. It’s also an undercurrent in early Beat writing, even if the latter was in part a reaction to the sectarianism that proletariat writing produced. In fact, traces of it exist in any writing that comes from and speaks to those on the wrong end of the economic order.

From the Depression to the beginning of the Cold War, Michael Gold was arguably proletariat writing’s leading advocate, as well as one of its primary practitioners. As one learns from Patrick Chura’s excellent biography, Michael Gold: The People’s Writer, the tentacles of Gold’s influence, in his heyday, spread far and wide. Moreover, Chura, in what constitutes the first full-scale Gold biography, drives home the point that anyone who professes to represent a progressive point of view owes no small debt to Gold, who, since the early 1950s, has gone largely unrecognized.

Born Itzok Isaac Granich in 1894, Gold chose to assume the name of a Jewish abolitionist civil war veteran in the midst of the notorious 1919–’20 Palmer Raids. A lifelong communist, he is best known, if known at all, for Jews Without Money, a semi-autobiographical novel that lifted the lid on New York’s poverty-stricken Lower East Side Jewish immigrant community. The literary equivalent of Lewis Hine’s famous New York photographs, Jews Without Money remains a powerful work that, since its publication in 1930, has never been out of print.

My parents hated all this filth. But it was America, one had to accept it. And these were our neighbors. It’s impossible to live in a tenement without being mixed up with the tragedies and cockroaches of one’s neighbors. There’s no privacy in a tenement. So there was always some girl or other in our kitchen, pouring out a tale of wretchedness to my mother, drinking tea and warming herself at my mother’s wonderful heart. That’s how I came to know some of the stories of these girls.

At the time of the novel’s appearance, Gold was being called an American Gorky. Through a series of vignettes, based, for the most part, on his own impoverished family and their neighbors, Gold captured the lives of poor Jewish immigrants of the era in prose as unvarnished as that of the most hard-boiled of writers.

Jews Without Money would be Gold’s primary literary achievement, but he also wrote poems, plays, and stories, as well as fiery polemics that, for over 30 years, appeared in a variety of progressive periodicals. H. L. Mencken considered Gold’s stories hardcore enough to be published in his American Mercury, which, until the early 1930s, specialized in tough guy regional writing by the likes of James M. Cain, Edward Anderson, Jim Tully, and John Fante. However, Gold’s tenure as a Mencken protégé didn’t last long, mainly because he felt Mencken was coaxing working-class writers like Tully into highlighting their anti-social exploits without any ideological comment, critique, or context. Had Gold been more flexible and less politically conscious, he might have, with Mencken’s backing, been more widely read. Fortunately for leftists, Gold was too preoccupied with political matters, preferring to put his efforts into periodicals like The Masses, New Masses, the Daily Worker, and Liberator. Had he not done so, there’s no telling how many plays, stories, and poems Gold might have produced, or how far his literary star might have ascended.

(Click here to read the remainder of this L.A. Review of Books article, including the second part on poet and novelist Maxwell Bodenheim)