Prisoners On the Page: Myron Brinig's The Flutter of an Eyelid 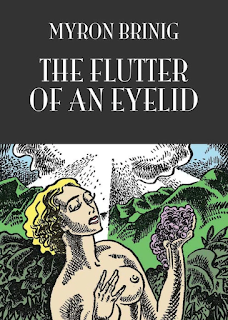 It must have been over 20 years ago that I first became obsessed with the seldom-spotted existence of Myron Brinig’s Southern California-based 1933 novel Flutter of an Eyelid. The novel had been mentioned in two related but very different books I’d been reading, Mike Davis’s Ecology of Fear: Los Angeles and the Imagination of Disaster and Kevin Starr’s Material Dreams: Southern California Through the 1920s. Had I been paying more attention, I would have remembered a similar shout-out in Carey McWilliams’s seminal 1946 Southern California: An Island on the Land. It wasn’t just the novel’s evocative title that grabbed me, but the descriptions of its setting and devastating finale, as well as the controversy surrounding it in its own time. Back then I thought I knew a bit about California fiction from the 1930s, but here was a book I’d never seen, much less read. And for good reason. In spite of, or maybe because of, its merits, Brinig’s novel had then been languishing in obscurity for over half a century. Fortunately, thanks to this elegant edition from Tough Poets Press, with complementary illustrations by the renowned Lynd Ward, Flutter has, after some 90 years, finally risen to captivate anew.

Given their respective agendas, Davis and Starr emphasized different aspects of Brinig’s novel. As a leftist cultural critic, Davis applies, as one might expect, a political lens, referring to Flutter as a “savage satirical novel that ends in mock apocalypse,” a precursor to — and arguably more original than — Nathaniel West’s Day of the Locust, which was published six years later. Meanwhile Starr, the former state librarian and eminent California historian, presents Brinig’s novel simply as one of the more interesting, eccentric, and scandalous works in a litany of neglected works from that era. In fact, Starr appears to be more impressed by the audacity of the novel than by its literary qualities, much less its prognostications regarding geographical retribution for the populations’ excesses and sins.

Davis’s special interest lies in Southern California catastrophe literature, a sub-genre that, at the time of Flutter’s publication, had yet to become as fashionable as it would in subsequent years. He claims that from 1931 to 1940 Los Angeles had been decimated in literature on at least seven occasions. With its literal and figurative fault lines, California, and L.A. in particular, seemed destined, even in the 1930s, to meet an untimely end — an end that would , for various retributionists, be its just comeuppance for decadence, economic inequalities, real estate speculation, cults, quackery, and the obsession with celebrity.

Davis make a further claim — namely, that Brinig was one of the first novelists to suggest a destructive correspondence between evangelicalism and not only bohemia, but the various cults of which Californians have always been so fond. That said, Starr, though largely apolitical, had the nous to place Flutter amidst a handful of other relatively unacknowledged 1930s classics, such as You Play the Black and the Red Comes Up by Richard Hallas (pseudonym of Eric Knight), The Long Haul by A. I. Bezzerides, Count Ten by Hans Otto Storm, or the better known They Shoot Horses, Don’t They by Horace McCoy. Of those novels, it’s You Play the Black to which Flutter might best be compared. In many ways, Flutter reads like a cross between Hallas’s dark novel and an array of other, more diverse works, from Evelyn Waugh’s to James Branch Cabell’s, with perhaps a soupçon of Wyndham Lewis, whose Apes of God is accented by a similar cattiness. At the same time, Brinig’s novel is so original that it is quite capable of holding its own in such company.

Born in Minneapolis in 1896, Brinig grew up in Butte, Montana where his Jewish Romanian father ran a dry goods store catering to local miners and their families. Brinig would attend NYU, followed by a spell working for Daryl Zanuck’s studios in Fort Lee. By the time Flutter appeared, he had already published five novels. This one appears to have been the result of a short, but uncomfortable, stay in Los Angeles at the beginning of the 1930s. At the time, Brinig was by all accounts on a fast track to literary notoriety — one that, in the year of Flutter’s publication, took him to New Mexico, where he was feted by that doyenne of Taos, Mabel Dodge Luhan. She was so impressed by Brinig, who she thought might become an American D.H. Lawrence, that she suggested he help write her memoirs. Brinig claimed the rough draft of Luhan’s life was “one of the most damning arraignments of modern white society in literature.” After he placed his stamp on her story, the two had a falling-out, echoing what one suspects had taken place in Southern California a couple years earlier. Luhan achieved her revenge in a 1935 short story, “Derision is Easy,” in which she portrayed Brinig as a voyeur seeking to penetrate the inner lives of others to use in his fiction. In turn, Brinig would offer a portrait of Luhan in his 1941 novel All of Their Lives, a no-holds-barred account that included the Luhan-like character’s fictional death by lightning. Brinig clearly had a fondness for such endings, with nature meting out revenge on some deserving person or population; there was also his 1937 novel The Sisters, which ends with the San Francisco earthquake of 1906.

None of his other novels, however, is as strange as Flutter. His earlier books had mostly been set in Butte. The protagonist of Singerman (1929) was based on Brinig’s immigrant father; Wide Open Town (1931), depicted disputes and disasters in the local mining community, including the lynching of a character based on Wobbly organizer Frank Little (recalling Dashiell Hammett’s Red Harvest, published three years earlier); and This Man Is My Brother (1932), also set in Montana, bravely portrayed the lives of two gay siblings. At the time, some were comparing Brinig to Thomas Wolfe, but anyone familiar with more recent novels of the West might, when reading Wide Open Town, be put in mind of Oakley Hall’s classic Warlock (1958). Yet so different is Flutter from Wide Open Town and the other novels that came before that one might be excused for thinking it belonged to some other author.

(You can read the remainder of this article at the L.A. Review of Books)