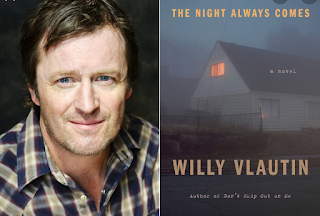 "This is the saddest story I have ever heard," reads the opening sentence of Ford Maddox Ford's novel The Good Soldier. One could say the same about Willy Vlautin's latest work of fiction, The Night Always Comes.  If not the saddest, then something close to it. But it's also, for me, Vlautin’s best novel yet. On the other hand, I'm prejudiced, since Vlautin has recently become one of my favourites. Though I have to admit it did take me several years to come to that conclusion, or even to fully appreciate his writing. Of course, I'd always liked his deeply rooted band Richmond Fontaine and, more recently, The Delines. But that might have been why I’d always been reluctant to give his work the attention it deserved. In my defence, I can only say, what an idiot I can sometimes be.

In fact, it was only in the past year, filled as it has been with  hardship and grieving, in both a general and personal sense, that I found myself with more than enough time to finally discover why Vlautin is rated so highly by so many writers I respect. So, over the past  seven or eight months I've read each of his books in the order in which they were written. Despite my culture-lag, I can say in all honesty that there are  few writers capable to conveying such compassion for ordinary, troubled souls as does Vlautin, and to do so in such a non-nonsense, straightforward and readable manner.

Although the tone of his work, with its cast of  hard-bitten characters, might strike a similar chord, Vlautin draws upon a  range of influences.  Foremost, of course, is his adherence to historically rich tradition of noir fiction and, by extension, film. But he also occasionally calls on elements of science fiction, and, even more so, novels of the west.  And like many hardcore noirists, Vlautin has clearly been influenced by certain  proletariat writers, with their concern  for the plight of people exploited and beaten down by those who the power to do so. But if Vlautin in his latest novel is  reminiscent of anyone, it must surely be David Goodis, whose tragic and haunting tales focus on a range   of troubled souls. In fact, it sometimes seems like Vlautin is channelling Goodis, while throwing in a  touch of Jim Thompson to keep things interesting and unpredictable.

The novel itself revolves around Lynette, a twenty-something who's been extremely hard done by, some might say  trampled on, by others, who, for the most part, happen to be men. In addition she has a history of personal problems. All of which she is doing her best to overcome, and to do what's right for  those close to her. But that's  made difficult not only by various people standing in her way,  but by the prevailing state of things. All around her, she can't help but note that  her home town of Portland is becoming increasingly gentrified. But Lynette, who, to save money, holds down more than one job while occasionally engaging in some dubious activities, inhabits a world in which trickle-down economics has not trickled down far enough to benefit her in any substantial way. And probably never will. She lives in a rented run down house with  her disabled brother and mother. The latter, in contrast to Lynette, is nothing if not  beaten down by a lifetime of hard work, bad luck and bad decisions, and has no interest in sharing Lynette’s dream of buying their ramshackle house to give them a  leg-up on a slippery ladder that might lead to solvency.

I mentioned the influence of proletariat fiction in Vlautin’s work. For me that's most apparent in Lynette’s mother’s five page inebriated assessment of the world at the end of the book, which reads like  a  21st century inversion-  filled with despair rather than hope- of  Ma Joad’s “we keep a comin” speech at the end of Steinbeck’s Grapes of Wrath. It's a grim assessment regarding the state of things. Even so, Vlautin doesn’t portray Lynette's mother, despite her view of the world, as a bad person but simply someone who has been destroyed by the system, whose future has been used up, but, despite what appears to be cruelty, might see  in Lynette a glimmer of hope. There aren’t many writers able to create such realistic characters and do so with such depth and humanity. In this day and age that’s saying a lot.