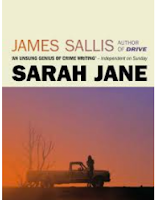 A new novel by James Sallis is always cause for celebration.  Sarah Jane is certainly no exception. His latest might be a slightly more subdued effort, but it's no less affecting than any of his past seventeen novels. But what struck me while reading Sarah Jane is the degree to which much of the action, essential or otherwise, takes place off the page. It's like a noir version of Chekhov or something one associates with some French new wave films. Perhaps this is true of past novels, but it's only now that I realised this particular technique. Whether deployed consciously or not, it's an effective technique, humanitarian and democratic in nature. Moreover, it allows the reader to call on his or her imagination, while respecting the motives and inner workings of the characters within the novel. Consequently, Sarah Jane,  a cop with a complicated past, spends her time reacting to events that happen around and away from her, not to mention those events from her past, whether instigated by her or by others. Of course, things happen in the novel, but Sarah Jane is more about she and others react to what happens to them. And that reaction manifests itself in the novel's dialogue and inner thoughts are sometimes tangential and at other times perfectly to the point.

Near the end of the novel, Sarah/Sallis writes: of an admired teacher "who said of words when they played well together: 'There is a small revolution going on in that sentence.'" I wondered while reading this if this Sallis hinting at his game plan. If so, why not?  Because that sentence might well describe what occurs in Sallis's own work, whether regarding his dialogue, description, or narrative drive. Sarah Jane then goes on to comment on how language in all its manifestations, might define the person. Including documents surrounding that person's life.  All of which is dependent on the person reading them. This goes not only for the investigator but for the reader. Likewise, each line of dialogue, image, inner thought, constitutes, in its own way,  a small revolution, one that builds on what has already been written, described or discussed. Documents- a birth certificate, a book, a memoir, an image- that constitute one's life can say everything or nothing, depending on how those documents are interpreted.

This state of affairs might well be what I have always liked about Sallis's work, but have never realized before. That his work is as cumulative as it is defining. Of the characters in his novels as much as the culture in which those characters exist. and how they reflect the culture in which the reader and writer live. So of course each book builds on the last one, from The Long-Legged Fly to Cripple Creek, Drive/Driven, Wilnot and now Sarah Jane. Each book seems to want to add to that revolution. And before you know it you have a way of thinking and way of regarding the world that is, in its own quiet way, revolutionary.  What's important in Sarah Jane, as in his other novels, is not the plot- pointless to recount and and often difficult to remember- but what exists in the cracks and crevices of the book. Not just how the characters regard one another and themselves, but how they react and what they say to one another.  It's up to the reader to fill in the details, exemplified by Sarah Jane's  first sentence-  "My name is Pretty but I'm not." - and allow things to build from there, one revolution upon another, an on-going process that, through the written word, as well as the cycle of life, death and everything in between, never ends.
Posted by Woody Haut at 9:50 PM