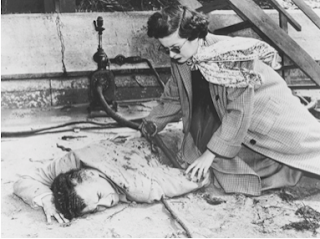 Perhaps everyone desires something similar. Hiding
home-truths as much as falsehoods. Neither unseen
nor unseeing. A historical reference mainly lost on
the white world, never mind it's derivation. Crossing
a bridge connecting Balboa to another world. Behind
dark glasses. To a sleazy hotel, a gambler and mink-
toting blond, bass propped against the wall, just below
a boxing poster. An interloper, not even a femme fatale,
to confront the creep who's messing with her seventeen
year-old art student daughter. Casually exercising a
droit du seigneur bluntness: as in, how much you willing
to pay to make me go away. Tells the tearaway daughter
he's only into her for the money she can generate. She
lashes out. A reasonable reaction, likewise her desire
to escape her island of surplus capital. He falls, hits his
head. It's not murder, but it's not bad, more a piece of
messy performance art, left to her mother to curate. So
how does the soft-spoken Irish black-mailer hear about
it? Or did I miss something? Inserting himself into her
life until she can produce the cash. Which requires the
approval of her husband, no more than a moan-and-groan
out-of-towner. “Quite the prisoner, aren’t you?" says
the blackmailer, himself barely in the loop, whether
amongst criminals or old-world revolutionaries. Yet
smart enough to know that on this beach of milk, honey,
and good housekeeping, appearances must be maintained.
She's called Lucia, but he prefers Lucy. It's not love but
it's not bad. Less about the danger of not having a man
around than what life is like in the dark, the past like
falling dust and and how easily things can fall apart. 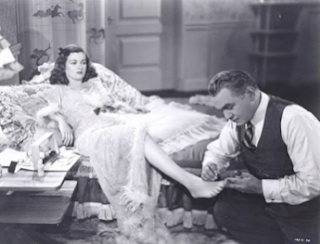 For the meek shall inherit clichés, scams and false
modesty. While, in the shop window, democracy is
once again placed on the auction block. As always,
it's about class, selling the dictatorship of taste and
art world pretentiousness to the masses. Easy targets,
if not for the human element, humdrum never more
than skin deep. Sunday painter, Christopher a sitting
duck gabbled by Kitty in her see-through raincoat,
and amuse-bouche approach: "You know those art
galleries on Fifth Avenue? I saw one little picture that
cost fifty-thousand dollars. They call it, uh, 'Seezan'."
Christopher, his invisible sign- "Another sucker born
of middle-class manners"- hanging from his neck,
"You can't put any price on masterpieces like that.
They're worth, well, whatever you can afford to pay
for them. " Kitty: "I bet I saw some of your pictures
there and didn't know it." Christopher: "Oh no. I, uh...
I don't sell my pictures." Kitty: "Well not in New York
you mean…I bet you get as much for your pictures in
France as those Frenchmen get right here in New York.
You're never appreciated in your own country." Less
a social comedy than an ice-pick to the heart. Whether
gallery fascism or a seller's market, the only guarantee
that everyone will get fucked in the process. A scam, somewhere between a stick-up and Say's Law in broad
daylight. His face, her body, wistful window reflections,
pain and punishment for the person he has become.