On the Snap: Three Decades of Snapshots From the World of Jazz, Film and Crime Fiction by Brian Case 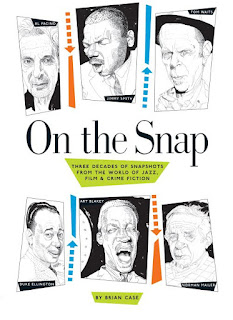 Anyone familiar with the British music press from the 1970s through the 1980s- specifically  the Melody Maker and New Musical Express- and Time Out  in the 1990s, where he held down the post of books editor, will be familiar with Brian Case's writing. I guess I first came across Case in Charlie Gillett's short-lived early 1970s magazine Let It Rock, and have been reading him ever since. Also the author of The Users, an evocative jazz-tinged noirish novel set in the 1960s, and first published at the end of that decade, Case's journalistic forte has always been jazz, crime fiction and films, subjects he has long held forth on an idiosyncratic, opinionated and straightforward manner. Born in 1937 to a lower middle-class Deptford family (his father was a copper), Case's attitude and tastes (predominantly American) have, to me, always seemed  particular to London at street-level.

Though it passed me by at the time, On the Snap came out last year, published by Caught By the River, a small London press. This slim- some sixty pages- but handsome collection of portraits of various musicians, crime writers, actors and film-makers that Case encountered during  his more than three decades as a journalist. Pretty much just Case in conversation mode, On the Snap- a euphemism, one supposes, for the quick fire writing that his kind of journalism entailed- kicks-off with a Foreward by Guardian writer and Case's one-time Melody Maker editor Richard Williams, who says the following about Case:
"He had a reputation as a stylist, which can be a euphemism for sins committed in the name of creativity. But his writing was surprising, funny, allusive, erudite, emotionally engaged, every paragraph containing an unexpected verbal firecracker, all stitched together with a degree of care and craftsmanship that shaped the narrative and sustained its drive."

What follows are concise takes that hit the reader from odd angles. Amongst his subjects are the following:
-Art Blakey ("waiting for the big oil crisis because it would cut off the electric instruments, leaving only the Jazz Messengers.").
-Art Pepper ("a fragile man to look after....wasn't what you'd call a solid citizen.").
-Chet Baker ("There's a certain sort of trumpeter who seems to exude a lot of self-pity- Chet did, sometimes Miles did.").
-Gerry Mulligan  ("He was amused that I liked that first bassist, Joe Mondragon's wig the best...").
-Duke Ellington ("one time I was glad of my baggy eyes...").
-Dexter Gordon ("Mr. Gordon, I'm your chauffeur...").
-Ornette Coleman ("...there were places he lived where one side of road there'd be hailstones and on the other side of the street it would be sunny. He felt white people were like that to him.").
-Jimmy Smith ("The reason why you don't see a lot of interviews with Jimmy Smith is because he swore all the time- 'motherfucker, motherfucker, motherfucker'....").
-Johnny Griffin ("re-entry goggles all round").
-Al Pacino  ("I thought I mustn't take my mac off. I guess I thought the bullets would spill out of my pockets...").
-James Elroy ("He was like a junkie, his leg tapping all the time.").
-Michael Caine ("I hadn't really cared about all that swinging London stuff and, of course, he'd been in all that. Then I saw the one set in Newcastle- Get Carter- and I thought, 'Fuck, he's good...").
-Sam Fuller ("He never really realised he was an artist, which was good because he never got pretentious. I loved him.").
-Ian Dury ("We both loved rhyming slang.").
-The Sex Pistols ( Johnny Rotten reminding him of  Pinky in Graham Greene's Brighton Rock, and  Malcolm McLaren, "a hustler of the highest order in fluffy pink jumper.").

To his credit, Case stays clear of the usual  sort of thing you read about when it comes to dead jazz musicians. Says Case, "Writing about fallen angels is a shtick for  journalists." And though his habit of forming a personal rapport with his subjects tends to be a bit predictable, that's part of the charm and no doubt comes with the territory. In the end, you probably won't agree with all his assessments, but you can't help but be entertained by these short narratives, like getting stuck in a Danish hotel with Tom Waits where he tries to figure out if Waits' Louis Armstrong growl is for real.  Or, playing on the fact that he's more fan than critic, when tenor player Ronnie Scott, owner in those years of the Soho club bearing his name, says to Case who'd complimented him on what Scott thought was an inferior set, "But you can't read fucking music, can you!"


That Case was more fan than critic no doubt gave him a certain freedom in his writing. Which perhaps is why for me he has always been near the top of that list of journalists who worked for the NME, Melody Maker, Time Out, Uncut, etc.. The likes of  not only Richard Williams, but Nick Kent, Vivien Goldman, Penny Reel, Paul Morley, Nick Kimberly, Jonathan Meades, Angus Mackinnon, etc..  One thing for sure, Case not only had, and based on these short takes, continues to have, more soul than most, but he seems to have been influenced by no one other than himself. Not if only some publisher, large or greenhorn, were to bring out a collection of Case's journalism. Wouldn't that be a treat?

Listen to Case reading from On the Snap here.

And here's a Brian Case playlist on Spotify of Case's jazz favourites:
https://play.spotify.com/user/heavenlyrecordings/playlist/1Qv2FZv5r6ZaKFMvMYsedZ