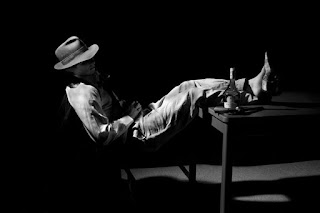 (in no particular order)

- My Face For the World to See by Alfred Hayes

- Hold the Dark by William Giraldi

- Under Tiberius by Nick Tosches

- The Great Swindle by Pierre Lemaire, translated by Frank Wynne

- Nobody Walks by Mick Herron

- It Always Rains on Sunday by Arthur La Bern

- The Good Physician by Kent Harrington

- Speak of the Devil/The Obstinate Murderer by Elisabeth Sanxay Holding

-Rendezvous at the Russian Tea Rooms- The Spy Hunter, the Fashion Designer and the Man From Moscow by Paul Willetts

-Empire of Sin- A Story of Sex, Jazz, Murder and the Battle For New Orleans- by Gary Kirst

-The Devil's Chessboard- Allen Dulles, the CIA and the Rise of America's Secret Government by David Talbot

-The Crime of Our Lives by Lawrence Block

Many thanks, Woody, for the lead on the new Red Cavalry. Reading it with pleasure--and a wonderful object to hold in the hand.

I tend to agree with Boris Dralyuk, translator of this Pushkin Press edition, that Babel is something of a hardboiled-noirist, with similarities to Hammett (both born in 1894), summed up by lines from a late story, The Story of My Dovecote: "My Uncle Lev, my father's brother studied at the Yeshiva in Voloshin, evaded conscription in 1892, and abducted the daughter of a quartermaster serving in the Kiev military district. Uncle Lev took this woman to California, to Los Angeles, where he abandoned her, and he died in a madhouse among Negroes and Malays. After his death, the American police sent us his belongings- a large trunk reinforced with brown iron hoops- from Los Angeles. In this trunk were dumbbells, locks of a woman's hair, Uncle Lev's tallish, whips with gilded tips, and herbal tea in little brown boxes trimmed with cheap pearls."