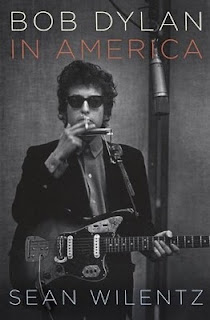 I've been listening to Dylan since he first began recording in the early 1960s. So far, not counting  Dylan's Chronicles, there have only been two Dylan books that have ever really caught my interest: A Darker Shade of Pale by the renown Cambridge musicologist Wilfred Mellers (1984) and Clinton Heylin's Recording Sessions, 1960-1994 (1995). The former, though little known and seldom cited, was, despite its flaws, the first book to really delve into Dylan's influences on a strictly musicological level, while the latter I appreciated because it was straight-forward information, with  a minimum amount of commentary, speculation and criticism. Though I appreciated Mystery Train, I've never been overly fond of Greil Marcus's books on Dylan; they seem overblown, too knowing,  and, for me, bordering on the  pretentious. And he's probably the best of the lot. Likewise, I have little time for the political browbeating of other books on the subject.
Sean Wilentz is at least a reputable historian (The Age of Reagan, The Rise of American Democracy), and he turns in what is arguably the best book yet on Dylan's music, charting the singer's career and evolution with particular emphasis on his recent work, stretching back to World Gone Wrong, and, before that, the Rolling Thunder Review, the making of Blonde on Blonde, and influence of the Beats, particularly Ginsberg, the aesthetics and politics of the Popular Front embodied for the most part in the music of Aaron Copland. In that chapter on Copland and the Popular Front, he also cites Charles Seeger, father of Pete. It's interesting, but  I would have preferred hearing  more about the likes of Ruth Crawford Seeger, mother of Mike and Peggy and step-mother to Pete, a far more important composer than her husband (nor does Wilentz mention that Charles' major contribution wasn't his music so much as his machine for notating non-western music). Nevertheless, Wilentz isn't afraid to enter troubled waters, picking over the more contentious parts of Dylan's long career.
Ironically, the parts of the book I found least interesting were the sections that entailed historical research of the kind more usually associated with someone in Wilnentz's profession- the story of Delia. But if I might add a few comments on that particular section: 1) Delia  might be roughly the same melody as White House but there are major harmonic differences between the  songs; 2)  White House Blues, closer to the Carter Family's Cannonball Blues than Delia,  was never recorded as far as I know at the same tempo as the latter, though there is no reason why it could  not be done that way; 3) though he claims earlier examples, I can't think of any recordings that predate  Charlie Poole's in 1927 version, though Ernest Stoneman and Riley Pluckett might have done so.  I had the same problem with  his sections on Frankie and Albert and Blind Willie McTell. It's not that these sections are poorly done, uninteresting or lack merit; it's just that I'd read much of it before from bona fide blues scholars like Paul Oliver. At least Wilentz avoids doing too much cultural analysis. Though I haven't cared for Dylan books that have emphasised that approach, I actually could have done with more of it from Wilentz, particularly the section on Dylan's conversion to Christianity, and why it became a cultural phenomenon during the period in question and how Dylan fit into that cultural climate.
On the other hand, I enjoyed the section of Love and Theft, and Dylan as a modern day minstrel, picking up on that record's many influences. While some of Wilentz analyses fall short , such as his all too brief section on Masked and Anonymous, a movie which I thoroughly enjoyed, and one of the best soundtracks ever, but at least he went to the trouble of covering  Dylan's Theme Time Radio and the much misunderstood Christmas In the Heart recording. Other parts were a bit long-winded, like addressing charges that Dylan has plagiarized some of his work. I mean, does anyone other than a few bloggers really care?
In the end, anyone who is interested in Dylan will doubtlessly  want to read this book. And well they should. After Wilentz, I'm not sure what more can be usefully said on the subject. That Dylan is a veritable history of American music, as well as American history, has been known for some time. Though I'm sure historians will comb Dylan's back and future catalogue for new ways to address the subject. I just wish more musicologists would  have a shot as well. At least Wilentz recognizes that fact; it's just that on that score he sometimes falls short of the mark.
Posted by Woody Haut at 1:13 PM