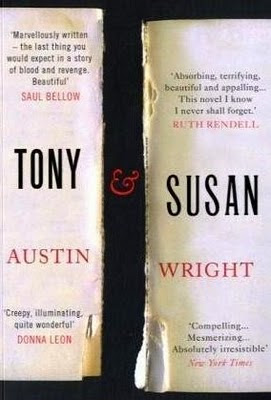 Blurbed by writers as diverse as Saul Bellow and Ruth Rendell, Tony and Susan might well be an anomaly in crime fiction. Not only is it an example of literary fiction, containing a novel within a novel, but it is, in itself, a perceptive critique of crime fiction and perhaps even fiction in general, particularly when it comes to the power a writer holds over his or her reader. But this isn't one of those pretentious and often inaccessible exercises in post-modernism. Instead, it's a down to earth book about the relationship between writer and reader, past and present, reverie and thought, fiction and reality. It centers on Susan, who, fifteen years earlier, left her would-be writer husband Edward for the security of a life with Andrew, a surgeon. She and Andrew have two children and a nice, if at times problematical, life. A parcel arrives for Susan containing Edward's novel. In a note he mentions that she was, and remains, his best critic and would she please read the novel and let her know what she thinks. While pondering the real reason Edward might want her to read the book, she turns over the pages of the manuscript and becomes engrossed in it. She discovers the protagonist is someone called Tony, whose quiet life is suddenly and violently turned upside down. Moreover, she can't help but find clues in it to Edward's life and their earlier relationship. As she delves further, she, through Tony, relives her past, including her life with Edward and her marriage to Andrew. It's a dark tale- both the novel within the novel and Susan's account of her life- about fear, regret, revenge, the power of the past to inflict itself on the present and future. For me the novel contains one minor flaw that has to do with the contradiction between Susan's well-defined sexual politics and her real life attitude regarding male sexuality, which probably isn't all that unusual and, for all I know, might have been intentional on the part of the author. In any case, in questioning the nature of writing and the relationship between writer and reader, this remains an exceptional and unusual crime novel, well observed, and, with both narratives moving at a fast pace, well worth reading. Austin Wright died in 2003 at the age of eighty. After reading this, it makes me wonder what his other books might be like.
Posted by Woody Haut at 11:02 AM