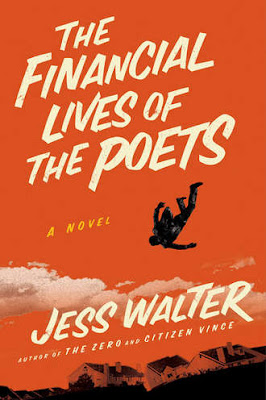 Jess Walter's The Financial Lives of the Poets

The publicist I spoke to was adamant, Walter's latest was not a crime novel. I had to say that I thought, in a round about way, it might be, this even though I had yet to read the novel, and knew little about it other than the title, which attracted me in the first place. After all Citizen Vince from a few years back was a classic. And I was right. After reading The Financial Lives of the Poets, I can say if this isn't a crime novel, I don't know what is. Okay, it's not hardboiled and there are no corpses lying around, but it is a book, pretty noir at that, about the financial and economic crimes committed in our name which force people to commit minor crimes to survive. Family guy Matt Prior, an ex-journalist and writer of financial poetry, is about to lose everything- his wife, his house, his livelihood- thanks to the credit crunch. Going out for milk at the local 7/11, he meets two young drug dealers who change his life and things go from bad to worse. It's a tale that runs from the suites to the streets- the true trickle down economy. Like Citizen Vince, it's also very funny, and reminiscent of Donald Westlake's social satire/crime novels such as The Ax and The Hook.
Posted by Woody Haut at 8:18 AM

Was it changed from Citizen Vince to Cousin Vince as it jumped the pond?

Oops. Once a citizen always a citizen. Thanks for pointing that out. I'm going to change it right now.