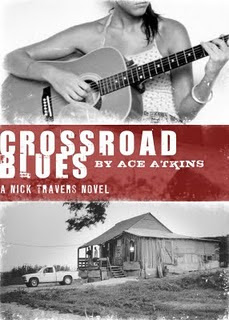 What is it with me when it comes to reading Ace Atkins novels? One moment I think his books are some of the best around, and the next I find them difficult to plough through? Obviously this says more about me than about Atkins as a writer. Though maybe not. But it does bring up the question of how one's state of mind affects the reading of particular books- one day you love 'em, the next day you're indifferent towards them. Literature is not value-free, either in a political or psychological sense. Robert Duncan used to talk about being in a state of readiness in order to write, or, for him, receive a poem, and the same goes for reading. In fact, has anyone ever written about the psychology of reading, just how one gets transported through a text to the place where the writing is taking place, and the mechanics which asks the reader to suspend disbelief? If so, I've yet to come across it. But back to Atkins. While I'm still of the opinion that White Shadow was one of the best crime novels of recent years, Devil's Garden left me cold. Moreover, a few years back I thought I'd have a look at Atkins's early work, after all he writes about blues and soul music, subjects that are right up my alley. But I was ambivalent about those novels, believing them to be derivative and shallow. Then other day I finished re-reading his 1997 Crossroad Blues, recently republished by Busted Flush and loved it. What does that say about me? Who knows? Maybe I just wasn't in a suitable state of readiness. Or maybe it has something to do with Atkins's work which treads a thin line between pulp fiction and a more engaged type of investigative, if not literary, writing. In fact, what's interesting I think about Atkins is that he exploits the tension between pulp fiction and investigative fiction, which demands more of the reader. Though sometimes one simply wants to be entertained, and at other times one wants something more, both of which Atkins can hint at even in a novel like Crossroad Blues, and certainly in a book like White Shadow and, apparently, though I missed it, in Devil's Garden.

Along with David Fulmer and, of course, James Sallis, Atkins is amongst the best when it comes to writing crime fiction with a music theme. Personally, I found Crossroad more satisfying than Walter Mosley's RL's Dream, which also centers on Robert Johnson, if only because it had taken its research seriously, and because the push of the narrative, incfluenced as it is by John D. MacDonald. On the other hand, I tend to agree with Elijah Wald when it comes to over-romanticizing Robert Johnson and his music at the expense of other equally good, if not better, blues musicians, i.e., Patton, Lonnie Johnson, Son House, etc.. That romanticization does a dis-service to the music. And Atkins's book does play on that romanticization. Well, it makes a good story. Plus the novel paints a vivid picture of the Delta region. Though, back in New Orleans, I think associating Professor Longhair with the disneyfication of blues is not only dubious but unfair. Granted, Longhair, at the end of his career, was over-exposed, as are many great musicians, from Monk to BB King, but Longhair was also one of the greatest of the New Orleans piano players. Small points, perhaps. All the same, I would highly recommended Crossroad Blues to anyone interested in crime fiction and the blues, and the relationship between the two. Unissued Johnson recordings. A cop called Willie Brown. A punk kid obsessed with Elvis. A devilish white blues promoter. And Nick Travers, a harmonica playing protagonist writing a thesis Guitar Slim. As well as the ambiance of the Delta and pre-Katrina New Orleans. Plus an Atkins short-story thrown in for good measure. Apparently, Busted Flush will be reprinting the three remaining Nick Travers novels, and I'm looking forward to re-reading all of them. Because, like Robert Johnson's song and his music in general, those book exist at the crossroads, between pulp and investigative fiction and, no matter how subjective the reading experience, can't help but be fascinating.

But let's give Ace the final word:

"For me making the connection between classic blues and hardboiled detective fiction wasn't hard. As a young writer, I found inspiration equally in Son House and Dashiell Hammett, and later in Chandler and Muddy Waters. The writing styles, the mood and tone, the subject matter and the atmosphere were very much the same. Those artists wrote about hard-luck bars and jilted lovers, betrayal and revenge. People had real problems, their worlds held real dangers, and they wrote about those problems and dangers in a spare, refined poetry that knocked you right in the gut. I think Nick Travers was born when I read John D. MacDonald while listening to some old Chess records. Somewhere along the line, Travis McGee and Muddy and Chicago and New Orleans became fused into one."
Posted by Woody Haut at 1:19 PM