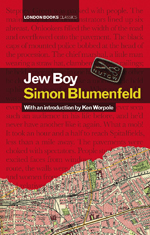 "The rich Jews would soon find a compromise with Fascism. So long as their profits were safe, they didn't mind who was in the saddle, but when their fat bellies were hurt, they squeaked, they marched, they shouted; in a year, two years, they'd raise some other red herring. Last time, the Arabs were the villains, now the Germans. But this contingent wasn't being fooled. Their quarrel was not with the German workers or the Arab workers. Their enemies were the bosses, whatever their religion, whatever their language."

The provocatively titled Jew Boy was first published in the UK in 1935 and, a year later,  in the US under the more acceptable title The Iron Garden. I first came across it in the late 1980s, when it was reprinted by Lawrence & Wishart. At the time, thanks to Compendium bibliophiles like Nick Kimberly, Mike Hart, and historian Ken Worpole, whose Dockers and Detectives was an illuminating and groundbreaking work, I was obsessed by the "London novel" both in the past and the present. I think I also must have heard about the novel through  the timely exhibition,  20,000 Streets Under the Sky- the London Novel, sponsored by the GLC at the Royal Festival Hall, which featured  London writers I'd read,  like Patrick Hamilton and Norman Collins, as well as those that, at the time, I'd never heard of, like Emmanuel Litminov, Ashley Smith, James Curtis, Alexander Baron and Mark Benney. At the time I tried to get hold of various books mentioned in the exhibition, and Worpole's book, particularly those set in London's East End. At the time one of the most interesting titles was Jew Boy by Simon Blumenfeld.

When I got around to reading Jew Boy, it definitely did not disappoint.  Blumenfeld's first novel (he would write three other novels: Phineas Kahn in 1937, Doctor of the Lost in 1938 and They Won't Let You Live in 1939) is  a political as well as coming of age narrative. Blumenfeld obviously draws upon upon his early days in the East End. The book's  protagonist, Alec, though drawn to the Communist party, is looking for a way out of his claustrophobic East End community, and moves to Hackney to live with a "shiksa." Yet he  returns to join the Communist Party and the book end with a note of revolutionary triumphalism, all the more poignant for its failure. I not only liked the narrative, but the way Blumenfeld, born in 1907, sought to turn a derogatory term  into a badge of honor, not dissimilar from the way Tottenham Hotspurs would call themselves the yids as a way to identify with the same anti-fascist movement that Blumenfeld was part of. Jew Boy, if nothing else, is a wonderful portrait of pre-war East End Jewish life, populated by recent arrivals from Russia and Poland, with its tenements, sweat shops, boxers, anarchists, Yiddish theatre and discussion groups, so well depicted by in William Fishman's The Streets of East London. It was a culture that produced writers and intellectuals politically well to the left, who preferred Marx to Theodore Herzl, a socialist Britain to a future Israel.

As customary with London Books, Jew Boy comes with an excellent introduction, this one from the aforementioned Ken Worpole. From it we learn that Blumenfeld was the son of a cap-maker. Before becoming a writer, he worked as a chicken-slaughterer, cap-maker, presser, and street-market trader. In the evenings he liked to box and talk  politics with his friends. During his early days he wrote a play in Yiddish, performed at the Grand Palais on Commercial Road, of the last performances of its kind in Europe.  Though he wouldn't publish any more fiction after 1939, he did write a drama about the Aldgate boxer Danny Mendoza and another, The Battle of Cable Street, which was performed at the Edinburgh Festival in 1987.  A lifelong Marxist, he worked for the New Left Review and was one of the founders of what would become the Unity Theatre in King's Cross for which he wrote two plays, as well as the Workers Theatre Movement.  Until shortly before his death in 2005, Blumenfeld was still contributing a weekly column in Stage magazine.  But it's Jew Boy for which Blumenfeld will no doubt be best remembered. A companion novel to John Summerfield's excellent May Day, also published by London Books, Blumenfeld's novel, even though it depicts a past that's gone forever, still packs a powerful personal and political punch that has present day reverberations. No wonder the National Union of Rail, Maritime and Transport Workers helped support the publication of the book. Jew Boy is yet another true London classic.

Really enjoyed your 'Jew Boy' blog and share your love of London novels.

I was interested to read your blog. My grandfather was Ashley Smith who you mentioned. For your reference:

I would be interested to know more about : "exhibition, 20,000 Streets Under the Sky- the London Novel, sponsored by the GLC at the Royal Festival Hall" where you heard of Ashley but obviously it is some years ago.

Thanks for the info on Ashley Smith. The exhibition 20,000 Streets... took place in 1986. And the novel by your grandfather cited cited in the catalogue is A City Stirs (1951)- "an experiment in documentary expressionism..." The entry was written by Ken Warpole whose book Dockers and Detectives is very good on the subject of working class literature- particularly East End- from that period. I can't remember offhand if he mentions Ashley Smith in Dockers..., but it's quite likely that does.