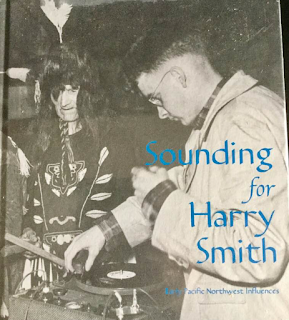 I’ve always been amazed by the way some individuals can move so quickly from eccentric outsider, even untouchable, to national treasure. Film-maker, painter, collector, anthologiser, and raconteur, Harry Smith no doubt tried his best to resist that sort of  transformation, but his record of accomplishments and his sense of aesthetics, were against him, at least amongst a certain segment of the culture. But thanks to sheer insistence, and a cantankerous nature, he still, to some degree, managed to do so.
I began collecting Smith ephemera-  interviews, recordings, articles- sometime in the late 1960s. Initially there was little to be found, the odd interview with P. Adams in Film Culture (1965) and John Cohen in Sing Out (1969), as well as an article or two by likes of Jonas Mekas in Film Culture or the Village Voice. But my interest in Smith went back  further to first seeing  his  films in 1963 or 64 at John Fles’s ground-breaking  Movies Round Midnight at the Cinema Theater in Los Angeles. A couple years later I would be showing Smith's films, amongst others, at the Straight-Ashbury Viewing Society, and then at San Francisco State’s Experimental College where I was teaching a class called The New American Cinema. Though I  hadn't at first realised  the Harry Smith who so painstakingly put together these complex and beautiful  hand-painted films was the same Harry Smith who collated the Anthology of American Folk Music that I had spent so much time listening to in the basement of the Pasadena Public Library. Music that would influence those modern practitioners  I was listening to such as the New Lost City Ramblers and, to some extent, Dylan, not to mention those I was taking lessons from like Stu Jamieson and David Lindley. 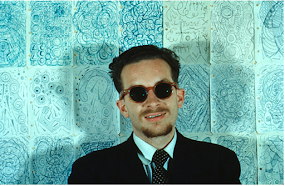 Even though I read all those articles and interviews, I was never less than hungry for information about Harry Smith. Where could this guy have possibly come from?  He seemed to play with interviewers when it came to talking about background, which seemed to only add to his myth.  His movies hinted at a knowledge of be-bop, the Kabbala, the music of Kurt Weil, while his  collecting, from records to objects of various sorts, were clearly the work of someone with a deep knowledge of American music and indigenous life. Not to mention his work as a sound  engineer, recording Native American peyote ceremonies and music  by groups like the Fugs and his interaction with  Kabbalist Lionel Zirpin, and  recordings, for the most part unreleased, of Zirpin's grandfather, Rabbi Naftali Zvi Margolies Abulafia (according to Raymond Foye, due for release at some point, likewise Smith's Naropa lectures on Native American cosmology).

But in accordance with his elusive answers in interviews, the question  remained: where did Smith come from? I mean, really come from. What corner of the world and culture could have produced someone like Smith. Or was he just a one-off that could have come from anywhere? Albeit on some  level, he  could just as well  have come from another planet, perhaps in the same planetary system that produced  Sun Ra or that ranting genius down the road apiece. A planet populated by outsiders who travelled to earth to live amongst other aliens and alienated. Of course, Smith was a hurricane unto himself-  I won't say an American phenomenon, though I'm tempted to do so-  who grew up in the 1920 and early 1930s in the northwest, Anacortes and Bellingham to be precise, which is as geographically marginal as it gets, unless, of course that is where you come from, and even then. It helps to know that Smith comes from a world steeped in Native American culture, a fishing based community, whose survival depended on its utilitarianism.
Thanks to Bret Lunsford’s beautifully put together and diligently researched Sounding For Harry Smith (see the trailer for the book below), we can now glimpse the world Smith comes from. Though it’s a world that has passed most of us by, Lunsford has managed to dig into the archives, to find the people who knew Smith, or the people who knew the people who knew Smith, to recreate the culture from which he emerged.  It's a world seemingly lost in time, but here substantiated by photographs and the historical record  Lunsford has uncovered. Of course, that past is not all that far off, which only illustrates how much has changed over the last hundred years. Which makes Sounding… partly a history and partly an  archeological study of sorts, reminiscent of another book I've recently come across, The Sea View Has Me Again by Patrick Wright, about the German novelist Uwe Johnson and his stay on the Isle of Sheppey, in the UK. Both books divide their narrative between person and place, no matter how incongruous that place might seem. Of course, such  books are, to some extent, cannot help but fail  if only because no such study can explain the likes of subjects such as Johnson or Smith.  However, both books come as close as one can get. To the degree that one comes away knowing not only a lot more about their subjects and their world.  A native of the region, Lunsford, regarding his locality, might at times venture a little too far into the weeds,  but that  doesn't matter- one could say the same about Wright's book, or, for that matter, Charles Olson's Maximus Poems- because it's the undercurrents that matter.  In the end Sounding... is a book born out of a love for both a place and a person, with enough photographs, maps, stories and ephemera to satisfy any true Smith obsessive.
In combining historicity and biography, Lunsford has produced an exemplary piece of investigative writing.  In that way it complements the handful of other books on Smith, such as American Magus edited by Paola Igliori, and Rani Singh's collection of interviews, Think of the Self Speaking, not to mention Daniel Darrin's short but sharp Harry Smith- Fragments of a Northwest Life, which explores the intervening years between growing up in the Northwest and becoming the Harry Smith one knows today. The fact is, Smith for a growing handful of multi-disciplinarians a life sentence.  Anyone serving such a sentence, or even those seeking parole, will want to give this book their close attention.  It is, after all, not only about Smith but about an America, perhaps not so much lost as rarely found, not so much about the weird as about those ghosts who haunt the present.  In an increasingly homogenised world, where everything, even the likes of Harry Smith, can be turned into a commodity, that seems like an honest and important activity to pursue.

For a concise overview of Harry Smith,  could do worse than check out Raymond Foye's on-line entry which can be found here.

Finally, here's a trailer of sorts for Lunsford's book preceded by what is for me a memorable extract  from John Cohen's 1969  interview, republished in Singh's Think of the Self Speaking, of Smith revealing something of his past, while, at the same time, revealing his puckish sense of humour.

"John Cohen: Someone once told me that you were thinking for a while that your father might have been some English mystic who was travelling through.

Harry Smith: That was Aleister Crowley, and as a matter of fact, my mother did know Crowley at about that time. She saw him running naked down the beach, perhaps in 1913 or 1915. I wish I had gone more into the chronology of my antecedents.

JC: But he's not your father.

HS: Sure. I suppose there's a possibility that President Coolidge was. Because of my father's and grandfather's interest in mysticism, the basement was full of books on whether Bacon wrote Shakespeare's plays, alchemy, and so forth. I had a whole blacksmith shop. I spent a lot of time trying to transmute lead into gold. My father was in the salmon fishing business, and during the war they fished the Fraser and Columbia rivers dry, so the canneries closed, and that was my playground as a child."