“‘Take it easy, I don’t know anything,’ is a line that never 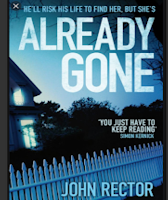 Recently, while recovering from a bout of sciatica, I found myself  binging on two novels by John Rector, a writer I’d heard about but had never read. Both novels, Already Gone (2011) and Cold Kiss (2010), his first novel,  were as diverting as they were intriguing. It occurred to me while reading them that noir writers have a tendency to withhold the backstories of their main characters until fairly late in their novels. This is what  Rector does to some effect in both novels. But, then, so did the likes of David Goodis, Jim Thompson and Dorothy B. Hughes. It’s a technique that gives all of their  work added tension and their main characters an added amount of ambiguity and mystery. I suppose the technique goes right back to the origins of Black Mask writing, and maybe to others who base their  narratives as much, if not more, on character as on plot.

I’m sure I’m not the first person to point this out, but, sciatica not withstanding, it had never occurred to me before. In Rector’s Cold Kiss, one has little if any idea what  trauma informs Nate’s actions and thoughts. There are hints, revealed in pieces  to his girlfriend Sarah. Something about killing his brother who, as a teenager, he had been in charge of, then something else about  a road accident, and detention. Clearly Sarah knows a bit, though not all  of Nate's backstory. Certainly  she knows  more than the reader does. Likewise, Already Gone, in which the couple, Jake and Diane, seem to know very little, if anything, about each other’s past, Again, one gradually hears about Jake's violent teenage days, his relationship with his father and their relationship to Gabby,  a local crime boss. This even though Jake has written a book that supposedly tells all, though, in fact, it only skirts around the subject of his past. But enough to find Jake gainful employment. At the same time, neither Jake nor the reader, knows  much about Diane's past, a forewarning if nothing else that there is trouble on the horizon.

The temptation is for an author to reveal any pertinent backstory in a book’s early chapters, and so establish a clear-cut motivation and narrative pathway. However, withholding the backstory means any such motivation will become part of the overall mystery.  Although there is nothing inherently wrong in revealing the backstory early on, it can, when it comes to a character’s psychology, seem overly formulaic. The implication being that a particular event or situation can  explain everything, which should be rarely the case, ir only because such events often explain only part of the story. There are, after all, choices made that are necessarily contingent, as well as choices based on free will, though that difference is often blurred, and can sometimes be mistaken for one another.

Narratives by the likes of  Rector might appear straightforward when it comes to linearity and forward  momentum, but by withholding the backstory, the reader is made to fill in, or speculate upon, the spaces, intervening as the information gradually becomes apparent. It's, for me, what makes the two novels by Rector interesting. The fact that the  reader doesn’t know exactly what  motivates Nate and Jake works to free up Rector's narrative, giving it the space in which to operate without the baggage that comes with flashbacks and explanations. This as opposed to plot driven novelists. Even James Ellroy, who readily and mostly effectively broadcasts his backstories whenever and wherever possible, sometimes  even expanding on them previous novels.

Though it might appear simplistic, even basic, when it comes to a novel's momentum, it is often a more subtle and complex technique than it seems. It means that not only are the peripheral characters kept in the dark, but so is the reader, which not only creates tension and movement, but the need for one to continue reading. It also tends to place those inhabiting the novel and those reading it on something approaching equal footing. Not contributing to the creation of an unreliable narrator or protagonist, but establishing the integrity of such characters while building a conflict zone that connects a character's past, present and future.

I’m not sure this technique is all that unusual. On the other hand, it makes Rector something of an old school writer, the technique a variation on Marcel Duhamel’s advice to Chester HImes when the latter began writing novels for Gallimard’s Serie Noire imprint, which is to say, avoid too much introspection and allow the dialogue to carry the narrative forward. The lesson from reading such writers as Rector, with all its psychological ambiguity, might be a version of that cry heard in countless films about newspapermen. But not “Hold the front page,” but  “Hold the backstory.” Ranking up there with that Mamet rule regarding screenwriting, applicable not only to chapter deliberations and scene shifts, but, as far as I’m concerned, to social gatherings of most varieties, which is arrive late and leave early. But, as usual, I am veering off-piste. Suffice it to say that reading Rector is an effective antidote to modern life, whether suffering from sciatica or not.