“Ontology! I’m just
telling you a story
about this projector, that’s all.” 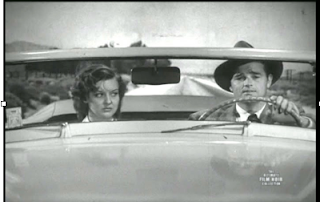 Sleazy motel insinuations,
a fatal encounter with a
telephone, a solo pianist
solo in Reno. We say, defeat
is never more than a heart-
break away. We say, why
congratulate someone for
hitting the road once-too-often.
We say, what does the term
hand oneself in actually mean?
We say, desert hitch-hiking is
an arbiter of fate. Extended
thumb, identity theft, arguably
murder, blackmail, tempered
by the inevitable droit de con-
ducteur. We say, Savage is
as savage does: hard as a
painted nail scraping a zealot's
cross, blond as putrifying water
dribbling down an innocent
man's throat. Or we might say,
a pick-up outside a gas station
will pave the future and placate
the devil. Or, on Poverty Row,
everything goes for as little as
the imagination allows. Or may-
be, that's what existing outside
the hash machine is about. Why
post-Black Cat, Ulmer was never
forgiven for scarpering to New
York with the boss-man’s property.
Big Apple tatters, Yiddish B-
features, returning, oy gevalt,
never far from farblunget. We say,
those were lean years, vestiges,
proliferating, in dream-time, radical,
and, in truth, cheaper by the dozen. 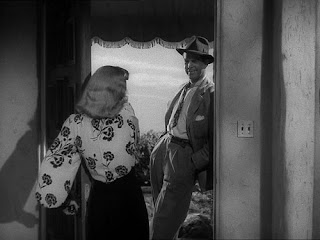 Double Indemnity (Billy Wilder, 1944)
Innuendos amok. The politics bleed
Chandler, sharecropping the role of
studio hack. His murder manual so
eloquently stated by Neff. How could
I have known that murder sometimes
smells like honeysuckle. A geographically
scented post-mortem in which everything
is sweet, corrupt, and empty. A bit like
L.A. itself. Blame it on Wilder's secretary
who went to the loo with that book. Or
Cain settling for ten thousand less than
what had been offered ten years earlier.
Landing in Chandler's lap by default.
Who thought the novel disgusting. Proust
in greasy overalls. But what's not to like
in that description? His career having
almost run its course, abandoned scruples
all who exit here. Wilder always claimed
there was a bit of Hitler in Chandler. He
should know.Was it apocrypha, or a joke,
Sarris's claim that Wilder, after arriving
in Hollywood, wrote to his mother, still
working in her Viennese cake shop: "Ma,
I'm doing great here in America, but I've
changed my name. I'm now called Thornton."
Barely a decade later his mother, step-father
and grandfather would die in concentration
camps. Barbara's blond wig? That was
Wilder's idea, the perfect disguise, modern
times, the first of many attempts to beat the
system, with automobiles the perfect vehicle
for so many conscience-ridden soliloquies.
Posted by Woody Haut at 11:29 AM