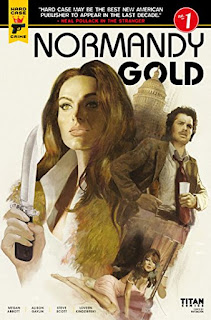 A not-so-guilty pleasure over the past year or so has been my discovery- I know, some will say what took you so long- of noir graphic novels. Easy to read, engaging, and an ideal medium for those interested in seeking out that intersection where noir fiction and film meet.  And these days there's no shortage of them out there. Of course,  I have my favourites. At the top of the list is still  the four  Parker books by Darwyn Cooke- Slayground, The Outfit, The Hunter, The Score (IDW Publications). Though that's not surprising since those Westlake/Stark novels on which they're based happen to be amongst my favourites as well. Then there's Graham Chafee's To Have and To Hold (Fantagraphics), as well as the series by Brubaker and Phillips's Fade Out (Image), and The Graphic Canon of Crime & Mystery (Seven Stories), a comprehensive anthology put together by Russ Kick, featuring an assortment of artists. 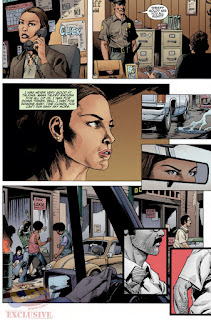 I can add to that list the recent Normandy Gold (Hard Case Crime/Titan), a  collaborative effort by novelists, Allison Gaylin and Megan Abbott, with artwork by Steve Scott, Lovern Kindzierski and Rodney Ramos. Out in April- until then you can read most of it in instalments- Normandy Gold might not be as visually arresting and innovative as some of the above, at least when  it comes to framing and editing, but whatever it might lack  in that department, it makes up for in  narrative drive, made all the more effective by the use of what amounts to a voice-over that works contrapuntally to the story-line.

Normandy Gold (is she Jewish or is her surname simply  a reference to her obvious bling?) is an independent, long-legged eye-stopper of a woman. Not only tough as nails, she does little if anything to make herself likeable. Her sole  concern is to find her sister's killer, and to mete out whatever rough justice might be necessary. At the same time, her permanent rage and self-destructive streak leads her to some dark and dangerous situations. It's no coincidence that Normandy reminds the reader as someone like Westlake/Stark's Parker. With a series of 1970s films in mind, not just Point Blank but the Parallax View and the Conversation in mind, one isn't surprised to find lines ranging from "Nobody's innocent here" to "What if we're not real? What if well just characters on a TV show?"

Moreover, Normandy Gold is a throwback to an era in which porn- hard-core, soft-core and anything in-between- seemed to be  entering mainstream, pre-AIDS, culture.  In that sense, one could view Normandy Gold as an off-shoot of David Simon's HBO series The Deuce, to which Abbott was a major contributor. But since I haven't seen The Deuce, I'm unable to say how deep that connection runs or even if it really exists. One obvious difference is that Normandy Gold is clearly aimed at young women in search of a raunchy, kick-ass female protagonist. Not much precedent for that other than in various various underground comics, with a nod of course to their predecessors in the late 1940s and early 1950s, the sort that came under attack by those obsessed with commies using the medium to corrupt  the youth of America (Anyone interested in what might be the origins of the genre might seek out the opening chapter on Dick Tracy in critic Donald Phelps's excellent Reading the Funnies). 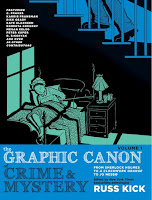 Of course, Normandy Gold isn't  the only noir bande desinee in Hard Case Crime/Titan's locker. They've also recently published Peepland by hard- boilers Christa Faust and Gary Phillips, an incongruous but effective pairing, with excellent artwork by Andrea Camerini. Then there's the even more visually arresting Matz/Walter Hill collaboration Triggerman and The Assignment with art work by Jef, as well as Max Allan Collins and Szymon Kudranski's Quarry's War. All of them subversive in their own right.

And all illustrative of just effective the graphic novel can be when it comes to visualising a genre already reliant on a sharp camera-eye, minimal exposition and sparse dialogue. Add to that concerns about texture, imagery, editing and story-line, and the result if perhaps the ultimate visualisation, not to mention democratisation, of the genre. All of which allows the reader to  glide through its pages, moving from image to dialogue to image in a roller coaster ride down an assortment of thoroughfares formerly the province of pure text or the screen.