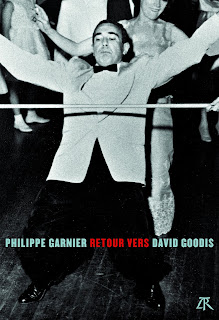 If any single person is responsible for post-1980s interest in David Goodis, it's surely Philippe Garnier, arguably the first to write at length about Philadelphia's favourite noirist. While a handful of others have tried to thumb a ride on Garnier's coat-tails, he remains, at least when it comes to Goodis's retreat from oblivion, the primary investigator. Not only has he done the ground-work- interviewing the relevant parties and scrounging the archives- he's conveyed what he's  found with no small amount of panache. That goes for David Goodis, Un vie en noir et blanc, or his "translation" of that book David Goodis, A Life In Black and White (my review of that book can be found here). "Translation" because A Life... is anything but a word-for-word translation of his earlier book, rather an adaptation meant English-speaking Goodisites.

The same in reverse could be said for Garnier's latest,  Retour vers David Goodis (published by La Table Ronde). Like A Life..., Retour... is hardly a strict translation into French of a book translated from the French.  That doesn't seem to be Garnier's truc.  Rather,  in his own words, it's plus serein, mois énervé, plus informé than his previous book. Regardless of whether one considers Retour... a revision or stand-alone, it has a great deal to offer in the way of new material. Whether that material has been gathered together since the appearance of those earlier volumes, or retrieved from  the cutting-room floor hardly matters. Because one finds here what seems an assortment of new informants, central as well as peripheral, all of whom, in their own way, add pieces to the puzzle which constitutes Goodis's life. And if that's not enough, Garnier's latest includes some high-quality images- photos book covers, stills, etc.- which makes the  book quite a bit more interesting visually than previous Goodis volumes. 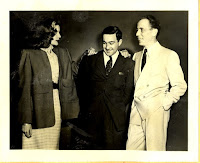 By referring to, and expanding upon, earlier books, Garnier, consciously or otherwise, implies that discovering Goodis could be an on-going process, shifting with the latest research, and offers that can't be easily refused. Whichever the case, Retour... dives deeper than ever into the murky waters that constitutes Goodis's work and world. Of course, this, in turn, necessitates new angles and digressions, the kind one has come to expect from Garnier, and an aspect of his writing- moving in and around his subject- that makes his work as interesting as it is informative. Likewise, one can't help but wonder  if and when  Retour... might be "translated" into English, and what that "translation" might look like.  In the meantime, anyone with  a rudimentary knowledge of French, shouldn't hesitate in giving this one a go.

A marvelous book with equally wonderful pictures. A picture is worth a thousand words in this book. Nice to see the Selma H. Burke connection.

Three years separate _Retour_ from the Goodis in English. They are distinctly different; one needs to read both. Were there problems with copyright, permissions, possible lawsuits? Conflict between Garnier and Eddie Muller? Or is this a literary device suggesting that no one can know "the real David Goodis," to quote the last paragraph of the _Goodis_ 2013 and 1984 versions.