Explaining the Inexplicable: Another Dream About Fielding Dawson 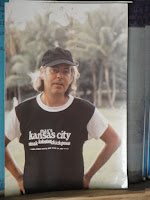 In the dream I was attempting to explain to poet  Ed Dorn the extent to which I liked Fielding Dawson's writing. I think I was making sense, but, then again, it was a dream, so who knows. However, whether awake or asleep, I tend to think I have a bit of form on this particular subject. After all, there was a time when I could think of nothing better than to wallow in Fielding Dawson's  free-flowing prose- which for me worked in the same way Dawson's Abstract Expressionist friends at the Cedar painted, or the way his beloved be-boppers constructed their solos, with sinuous lines, improvised yet based on theory and practise. For me, Dawson, no mean artist himself, was one of the few writers able to catch what others have found so elusive- which is the ability to move between the inside and the outside, perhaps what Dawson's fellow-Black Mountaineer Dorn referred to in an early narrative- was it Idaho Out or The Land Below?- as the insidereal/outsidereal.

I guess Dawson-mania first hit me in the early 1970s, with his first, and I still believe his best, collection of stories, Krazy Kat and the Unveiling, published by Black Sparrow in, I think, 1969. Even now I find those stories remarkable, particularly when one thinks that many were written by someone barely in their twenties.  Other writers, similar in age, locale and temperament, whether Lucia Berlin, Douglas Woolfe or Robert Creeley in The Gold Diggers, were able to explore a similar  terrain, but none were able to own the territory so definitively as Dawson. He not only moved seamlessly between extremes- inner and outer, emotions and situations (exemplified by the title of his Franz Kline book: An Emotional Memoir of Franz Kline)- but he did so with an intensity that made it seem like his words were about to singe the pages on which they were written. All this while maintaining a conversational manner and  matter-of-fact tone, willing to entertain the everyday as well as the near-miraculous.  Krazy Kat... was,  of course, followed by other collections  and   novels- A Mandalay Dream, Penny Lane, Virginia Dare, Open Road and  A Great Day For a Ball Game- though, for me, only a handful approached KK's power and intensity. Which is not say that I did not hungrily consume every book  as soon as I could get my hands on them.

Perhaps it was inevitable that, over time, Dawson's writing would become less intense and introspective, and, in the process,  more chekovian, which is what Ed Sanders had once said about his writing, an assessment  I initially dismissed. Indeed, some of Dawson's intensity would be channelled into other work, which began in the early 1990s, namely teaching writing to prisoners, first at Rikers Island, then other New York institutions, becoming, in the process an advocate for writers ensconced in the prison system. Though maybe Dawson had written himself out, which would be understandable, or it could be that he found a pursuit that was just as,  if not more, fulfilling.

By early 1990s I was, for some reason, no longer reading Dawson.  Maybe I was too involved  in politics, or maybe it was a matter of my tastes and concerns having changed.  Then, one morning in early January, 2002, I woke up realizing it had been over a decade since I had last read a Dawson story or novel and suddenly wanted to reread him, as well as find out  what he'd been writing in the intervening years. So I ordered his two most recent books, then googled him, only to discover that two days earlier Dawson had passed away. Though his death hit me hard, I didn't find  it altogether strange that I should be thinking about him only a couple days after he'd passed away. Probably because I'd always felt a strong connection to his writing. And, if the dream in which I was trying to explain my liking for Dawson is anything to go by, it's a connection I clearly harbour to this day. One thing I do regret is never having had the opportunity to  meet the man, nor fortunate enough to ever hearing him read live. Still, I've recently managed to make do with the handful of readings archived on sites like Penn Sound. And while I'm not sure how Dawson is regarded these days, I notice there's even a piece of music one can hear on YouTube by composer and one-time Bjork-associate Nico Muhly entitled Fielding Dawson in Franz Kline's Studio. But, for me, it’s the stories on the page that matter. The rest is simply life, as we know it. Or maybe  a dream in which one tries, and fails, to explain what might be, in the end,  inexplicable.

I loved Krazy Kat and like you consumed Dawson's work. I forgot about him somewhere along the line. thanks for the reminder...