A Writing Life: Blood, Bone and Marrow- A Biography of Harry Crews by Ted Geltner 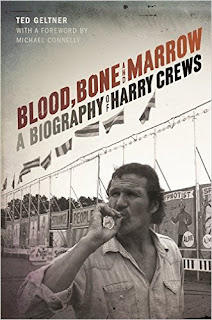 Harry Crews has long been one of my favourite writers. He's also one of the few writers whose books I've, over the years, avidly collected. I count myself fortunate in having spoken to him on a few occasions, if only by telephone.  One time was for a Guardian  article, which, for some reason, the paper decided not to publish. The other occasion was about a screenplay I'd written for The Knockout Artist. Despite his reputation, he was generous with his time, and, according to my wife who answered one of his calls,ever the gentleman. I had wanted to know about the status of The Knockout Artist, and if Sean Penn still had the option on the book. He told me Sean Penn would  come up with a workable screenplay for his novel. "The trouble with Sean," he said, "is he can't write." Now I learn from Ted Gleaner's excellent and readable biography published by University of Georgia Press, exactly what Crews meant by that statement. Because, according to Geltner, Penn's screenplay ran to an incredible 800 pages. No wonder he never made any progress with the film. As for my 110 page screenplay,  it  still sits in a desk drawer, waiting for someone to read it. 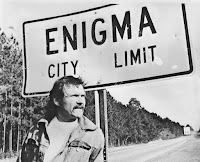 Of course, there are many stories about Crews, not many of them all that flattering.  Not that Geltner shies away from detailing them. He also details Crews' early brushes with death, which most readers will know about from Crews's incredible autobiography of his early years, A Childhood. No matter how disreputable Crews's behaviour- the drugs and alcohol abuse, the physical and verbal confrontations, etc.- he was still able to churn out one excellent novel after another, mostly about outsiders and freaks. After all, that was how Crews viewed himself. Like his novels or personal behaviour or not, Crews, who learned his craft from rewriting Graham Greene's Heart of the Matter but is more likely to be compared to Flannery O'Connor, lived to write and wrote to live. Granted, the quality of his books tended to tail off somewhat, becoming slightly cartoonish, towards the end of his writing career. But even the likes of Mulching of America is a delight to read and no Crews fan would want to pass it by. And his journalism never failed to be interesting. Some say- I'm not one of them- that he was at his best when writing for one up-market magazine or another. And he could be, as Michael Connelly in his introduction, suggests, an inspiring teacher. This is a warts and all portrayal that will  interest any dedicated reader of Crews's fiction and non-fiction. It also adds to Crews's autobiography of his early life. With interviews with all the relevant parties, and straight forward prose, this is probably as thorough a biography as one can expect about this eccentric, self-destructive, but excellent, even Swiftian, writer, who, in novels like The Knockout Artist, Scar, The Gospel Singer, Scar Lover, Car, The Hawk Is Dying, delved as deep as anyone into the heart of America.

TIGER MOODY. said...
This comment has been removed by the author.
10:30 PM

Sounds interesting. Email me at woodyhaut at aol dot com and I'll send my address.