New York Jewish Noir: Under the Eye of God by Jerome Charyn 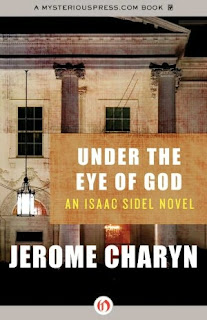 Okay, I'll come clean. Jerome Charyn ruined my life. It was  that Zomba collection back in the 1980s that did it: Marilyn the Wild, Blue Eyes, The Education of Patrick Silver and Secret Isaac, all in one volume. I'd never read anything like it before. I'd been into Hammett and Chandler,  Goodis, Himes and Thompson, but I'd never read anything quite like those four novels. Poetic, operatic, funny, heart-breaking, they were like a cross between comic-books and Russian novels, and made me aware of the possibilities inherent in hardboiled/crime/noir fiction. I searched for similar writers, and when I couldn't find any, I found myself going back to early Black Maskers like Paul Cain. Not really  the same thing. Nevertheless, a number of them seemed to suggest Charyn's particular brand of grand-gesture poetic-realism.

Flash forward thirty some odd years, and I'm still reading Jerome Charyn. In fact, I've probably now read about twenty books by him, which represents approximately half his output. Though he's written mainly fiction, there are also  biographies (Babel, Dickinson, Marilyn Monroe, DiMaggio), histories, particularly when it comes to New York, including its Jewish crime bosses, and the cinema. He's also written graphic novels and even a book on ping-pong, which, in the tradition of his character Blue Eyes, is apparently Charyn's game. When it comes to crime fiction, the breadth of Charyn's oeuvre  can also be suggested in his taste in crime fiction, on full display in a  collection he edited back in the early 1990s, The Crime Lover's Casebook/The New Mystery, in which one finds writers like Ellroy alongside Borges, Faye Kellerman alongside Clarice Lispecter, DeLillo and Joyce Carol Oates alongside Mosley and Westlake. 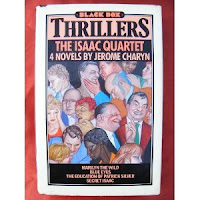 Charyn's Under the Eye of God (Mysterious Press), is the latest volume tracking the life and times of Isaac Sidel, one-time cop and police commissioner, then New York mayor and now U.S. vice-president-elect, with even greater, or, depending on how one looks at it, worse, things on the horizon.  At any rate, that's his destiny if he plays his cards right, which, of course, he's never quite able to do. Because Issac wears his heart on his sleeve and a Glock in his waistband. Here Isaac the Jewish cop-trickster haunts old hotels, before venturing beyond the environs of New York,  to Texas and points east. After all, a veep  has to campaign, no matter how dangerous it might be, or who might be plotting against him, whether  Texas oil money or wealthy New York hermits. It's a book that  conjures up the past, most specifically Jewish crime boss Arnold Rothstein and his minion.  Which makes  Under the Eye of God more or less a fictional companion to Charyn's book from 2005 about New York, Gangsters and Gold Diggers.

Of course, it's also an homage to  New York of days gone by, of what has been lost, and cannot be regained, however much  ghosts from the past continue to haunt the city:

"Isaac had lived at the Polo Grounds. Had stolen through the gate countless times as a boy. He loved the New York Giants almost as much as he loved AR. He could become the next Methuselah, celebrate his thousandth birthday, and he still wouldn't recover from the Giants' betrayal of New York- they lit out for San Francisco like a pack of greedy dogs. The bastards took Willie Mays, who had to stop playing stickball in the streets of Harlem. He was never the Say Hey Kid in San Francisco, just another ballplayer with a sweet bat and glove....and without the empty plains of the Polo Grounds." 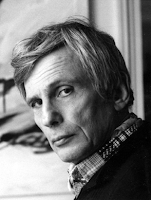 As the old disappears, leaving nothing more than a series of fading memories, the Bronx is about to be turned into military reservation, a real estate killing that will benefit less than one percent of the one percent. Here there's a shadow behind every shadow, a deal behind every deal, a conspiracy behind every conspiracy. People impersonate those who exist in a nexus between dream and reality. Children become political advisers.  Decrepit hotels and eateries become holy places. Prostitutes become goddesses. Crime bosses and their accountants become the last remnants of civilization, as urban decay is flattened into concrete and, like a Koch Brothers wet-dream, all profits end up in the hands of misty-eyed oligarchs. This is crime fiction that only a first generation American with English as a second language could write.  Because Charyn still manages to approach language and syntax in a fresh way, returning both writer and reader  to the mythic, poetic and tragicomic roots of the genre, be it in the comic books or the stories read while growing up. At the same time, Charyn takes the genre forward, into uncharted territory. Who else can write like this? Who else can address large issues with such legerdemain deftness?  How many writers can so easily ruin one's life?

So perfectly descriptive of the magic that is Jerome Charyn that I cried. It's on my Isaac Sidel page now: http://www.facebook.com/IsaacSidel

Thanks, Lenore. Just saw your Sidel Facebook page and it's definitely a "like." What a nice discovery. Good to see there are so many JC fans out there. Hadn't realized there was an animated TV series in pre-production. That's one to look forward to.