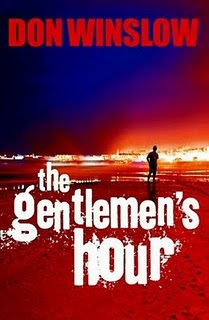 What I like about the novels of Don Winslow is what learns from them. He never fails to throws in information about various subjects, which, for me, can't fail but to make the novels interesting. Whether the drug trade or the fire insurance business, Winslow's subjects and the information that derives from them invariably supersedes his plots, which usually turn every which way but loose. Then there are his characters, ranging from Lebowski types to hardcore psychos, all fully human, flawed and all too believable. Yet what I remember is the information. For instance, I can only vaguely recall the protagonist and plot in California Fire and Light, but I still retain bits and pieces of the information regarding indications of how fire spreads and the way insurance companies work. In The Gentlemen's Hour one learns, naturally, about surfing, which here is pretty much a metaphor for everything, but also the politics of real estate. I would even go so far as to say that Winslow is one of the most subversive writers around, seducing the reader through character and plot, while sneaking in a killer political punch. Plus his prose sometimes, particularly as a way of kicking-off his novels, can sometimes read like poetry. Though I like him best when he scales down his work rather than embraces larger subjects as in Power of the Dog, I'm looking forward to his next major work, Savages, out in the UK at the end of the summer.
Posted by Woody Haut at 10:50 AM