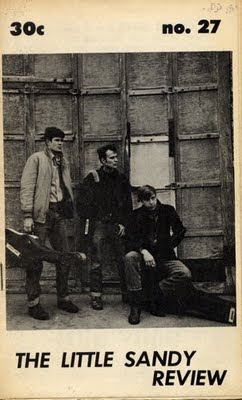 
In the early 1960s, The Little Sandy Review, edited by Jon Pancake and Paul Nelson, out of Dinkeytown in Minneapolis, was the most intelligent, hippest music magazine going. There couldn't have been more than a few hundred readers of the magazine that Pancake and Nelson clearly produced on a shoestring budget. I saw copies at the Ash Grove in Los Angeles in 1963 and quickly became an early subscriber- probably one of a couple hundred. The magazine's politics- though they would have probably denied they had any- and tastes (the New Lost City Ramblers, traditional music, bits of early Dylan, the Ginger Man, the films of Bergman, etc.) would rub off on me, and serve me well in the years to come. Here is an excellent history of the magazine by David Lightbourne. And there's more to come.
Posted by Woody Haut at 6:02 PM

I'm positive that I have some copies either in a box in my basement or at our cottage on Lake Winnipeg. During the 1960s the manager of a left-wing bookstore named Coop Books used to promote folk music shows and bring in small publications such as this about the music scene. He probably got this one because of our proximity to Minneapolis where some of the artists performed before comimg north. I thought about that bookstore and the concerts for the first time in years just the other day when I read that Pete Seeger would be on Public TV next Monday.

I had a copy of Little Sandy that I believe was inside the cover of an old Folkways Pete Seeger and Frank Hamilton. I still have the album but sadly not the Little Sandy. I got that album in 1959 or 1960 and played the heck out of it. An old friend of mine loved that Meadowlands tune and eventually maneuvered himself on to the cover of the Daily Worker. He hummed that tune all the time. There is an old story that Bob Dylan crashed with the New Sandy Review publishers and left for New York with their record collection. Either the truth or a lie. Who knows now?

I loved that record as well. Found a copy not so long ago. It holds up pretty well, particularly Living In the Country. Apparently it's true that Dylan did help himself to a good portion of Paul Nelson's record collection. Nelson went on to greater things, while Pancake stayed pretty much true to his LSR roots (e.g., he continued to write liner notes for the New Lost City Ramblers). Nelson was an interesting guy and the model for Jonathan Lethem's protagonist in Chronic City. There's also a very good Nelson biography that recently hit the bookstores.