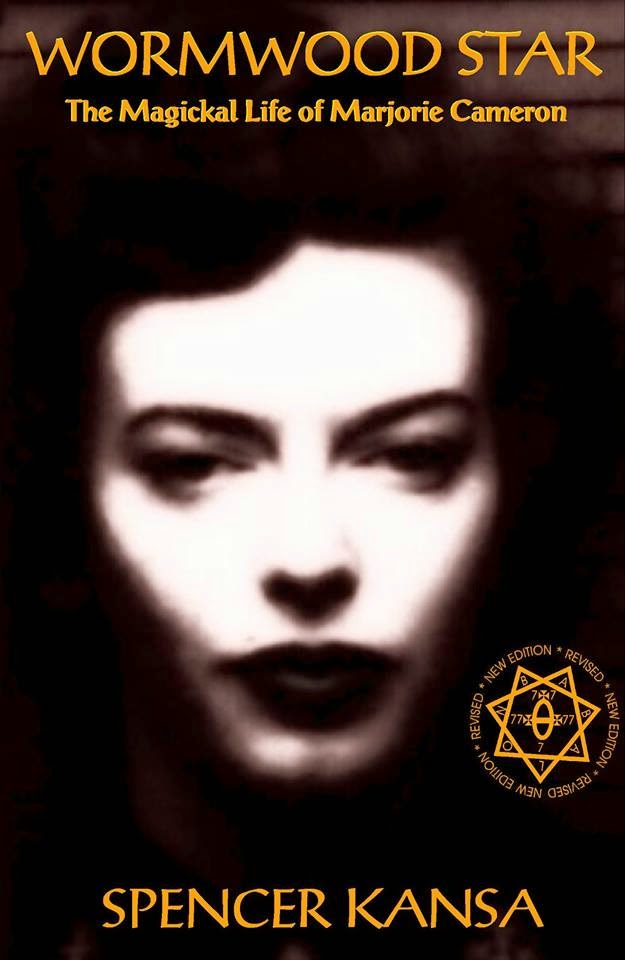 My interest in the artist, film-maker and self-styled witch Cameron goes back to 1964 when, as a  nineteen year-old, I attended a Movies Round Midnight screening of her films at the Cinema Theatre in Los Angeles. The Cinema was located on Western just above Santa Monica Blvd, next to the O Sole Mio Pizza House.  I began attending those screenings no doubt for all the wrong reasons, when someone said they were showing midnight porn films at some movie theatre in Hollywood. Naturally my friends and I were curious only to discover the "porn" was, in fact, Stan Brakhage's Window Water Baby Moving and Jean-Pierre Melville's Les Enfants Terribles. I'd  never seen anything like either film, and so returned the next week, and every week thereafter. The Cinema was managed by Mike Getz (in fact, a distant relative of mine), but it was poet John Fles who programmed Movies Round Midnight. Fles had been involved with periodicals like Trembling Lamb, Kulchur, the Chicago Review and its off-shoot Big Table. His aesthetics were straight out of the Film Makers Co-op in New York and, to a lesser degree, Canyon Cinema in San Francisco. Over the next year or so I saw all the classic underground films of the 1960s, as well as hard to get and seldom seen films from earlier decades.  Those films made enough of an impression that I would later exhibit similar films in San Francisco.

The most memorable screening at the Cinema was that night Cameron showed her films. Having fallen on hard times, it was meant to be a benefit for her. As the images appeared on the screen, she sat in the projection booth reading her poetry over the p.a. system. I didn't know much about Cameron at the time other than she had a reputation as a witch of some kind. Nor did I  know what to make of the mid-screening commotion in the projection booth, and what sounded like breaking glass followed by a number of tarot cards that descended onto those sitting in the back rows. Aware of Fles's fondness for dada-like moments which he outlined in his essay entitled "Seeing Is Believing," which I wish I still had, I took the commotion to be just another example of his desire to "upset the equilibrium," like the time  he stopped Invasion of the Body Snatchers at the moment when Kevin McCarthy looks into the truck and sees all those pods, disconcerting the audience to such a degree that, for a moment, I thought a riot might ensue.

Apparently Kenneth Anger, Cameron's sometime friend and rival,  had invaded the projection booth, demanding the print of his film Inauguration of a Pleasure Dome be returned to him. This developed into a full-scale confrontation that spilled out into the lobby. As I left someone brushed me followed by a small gaggle of men dressed like thuggish bankers. The next day my mother asked me why there was blood on the back of my shirt. "Were you in a fight last night?"she asked. "No," I answered, "I was at the movies." When I returned to The Cinema the following week,  Kenneth was picketing the theatre for not respecting the rights of film-makers.

That occasion is told in some detail in Spencer Kansa's well-researched and entertaining Wormwood Star. In this instance as told by Fles, Getz and photographer John Brittan- the only person, according to him, who respected Kenneth's one-person picket-line.  Kansa also mentions that the altercation might also have been about some Aleister Crowley manuscripts that Anger thought were rightfully his. In any case, that's just one anecdote out the many that appear in Kansa's book, a new edition of which has just been published by Mandrake a predominantly occult publishing house in the UK.

Marjorie Cameron (1922-1995), who arrived in Pasadena in 1945 straight out of the military, was for many years an iconic figure in L.A. bohemian culture, which included such disparate personalities as Wallace and Shirley Berman, Curtis Harrington, Kenneth Anger, Dennis Hopper, Dean Stockwell, David Meltzer and Russ Tamblyn. Interestingly, she never had much time for Venice poets like Stuart Perkoff, who apparently were too macho for her temperament. And she appeared in several movies, playing opposite Hopper in Harrington's film low-budget classic Night Tide, then in his film Wormwood Star, as well as in Anger's Inauguration of a Pleasure Dome.

Born in Iowa and a frequenter of jazz joints on L.A.'s Central Avenue, she  met and, in 1946, married  the infamous rocket-man and leading occultist Jack Parsons whose life came to an untimely end in Pasadena, when in 1952 he blew himself up, whether by accident or otherwise, at his Pasadena residence on South Orange Grove. It was a death from which Cameron would never fully recover. Parsons, the subject of at least two biographies, was not only a Crowley devotee and patron of the Agape Lodge, but one of the founders of the Jet Propulsion Laboratory and an influential rocket scientist at Cal Tech, this despite the fact he had no formal training in such matters save some experiments to perfect liquid-fuel rockets in the Arroyo Seco and Devil's Gate Dam. He was also a writer, poet and science fiction fan who was referenced in Philip K. Dick's novel Dr Futurity, and could count amongst his friends actors, artists, and writers like Jack Williamson, Robert Heinlein and L. Ron Hubbard, who shared Parsons' residence and became something akin to his sorcerer's apprentice. Following Jack's  death, Cameron took it upon herself to take up where her husband had left off. In fact, Wormwood Star, the title of Kansa's book, is also the title of Curtis Harrington's Cameron-inspired film, and the name Cameron gave to Parsons' magical child, the production of which became Cameron's long-term obsession. 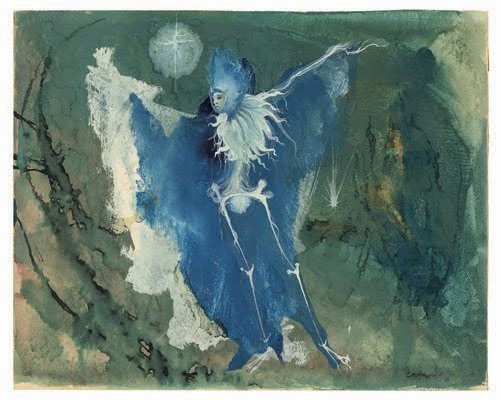 Though Cameron would move from Pasadena to Silverlake, as well as Venice, West Hollywood and various spots in the desert, there was something about Pasadena in those days. Perhaps a matter of wealth combined with mysticism. It's a subject Mike Davis addresses in the first chapter of  City of Quartz. As religious leader and mystic Annie Besant once said, "The finest magnetic vibrations in the world are to be found in Pasadena." Though I grew up in east Pasadena- S. Orange Grove was like another world to me- I was never privy to magnetic vibrations, fine or otherwise. However, Farnsworth Crowder's Los Angeles- The Heaven of Bunk Shooters (1931), sheds a bit of light on those "vibrations," and  how the occult and various sects exploited public awe and mystification regarding science, physics and metaphysics:

"Whatever waves, oscillates, vibrates, pulses or surges contributed, by analogy, to the explanations of harmony, absent treatment, telepathy, magnetic healing, vibratory equilibrium, spiritualism or any other cloudy wonder. Surpassing are the powers of these scientific sects. One awed citizen referring to a busy group of vibrators cloistered in the hills, whispered, 'My lord, man!- they wouldn't dare release their secrets. The race isn't ready- not advanced enough. The world would go to pieces. It would be like giving everybody a handful of radium. Ignorant people would have too much power.'"

Got it?  But that's one of those  disconnects that Kansa, who manages to interview most of the relevant parties,  avoids addressing. Clearly, tangents abound, but, in the final analysis, Kansa demonstrates Cameron's importance in the history of L.A. art and bohemian culture of the 1950s and early 60s. Though exhibiting many of the characteristics that would become commonplace a few years later, Cameron would eventually be enveloped by mass culture, not to mention various personal issues and downright bad luck. Too bad Kansa offers little in the way of criticism regarding the historical drift represented by the likes of Cameron. And, disappointingly, there's no reproduction of Cameron's art work. Though, to be fair, Kansa makes it a point to say that he was unable to obtain permission to reproduce it, which he mitigates by adding that much of it is available on-line. Part-visionary and part-naif, Cameron  cuts an admirable if somewhat pathetic figure. But, for me, whenever I hear Cameron's name, I can't help but think about that night at the Cinema Theatre in 1964 and all those tarot cards falling through the air and the look on my mother's face when she realised that going to the movies can sometimes be a bloody affair.

Excellent post! As you mentioned, my parents were very close to Cameron, and I knew her as a child and as an adult as well. Mostly due to the latter part that we shared the neighborhood of West Hollywood, and I would run into her at Ralphs Super market on Sunset Blvd. Without a doubt the queen of the Bohos. I'm glad that she is getting some attention now, and her artwork will eventually be brought out to the daytime (or darkness).

Woody -
Fascinating on so many levels … and again it makes me think that there needs to be a very different book (from your POV) written about Pasadena and its environs during these years … Also: That whole scene at the Cinema Theatre… And the title should be: "No, I was at the Movies"