An Obscure Road to Hollywood: Scoundrels and Spitballers- Writers and Hollywood in the 1930s 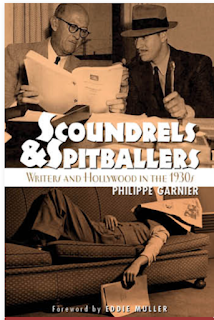 From Dorothy B. Hughes's In a Lonely Place (1947) and Alfred Hayes's My Face For the World to See (1958) to F. Scott Fitzgerald's Pat Hobby stories and the Coen Brothers' Barton Fink (1991), it's become commonplace to portray Hollywood as detrimental to the lives and careers of writers who have worked there. According to Philippe Garnier's well-documented new book Scoundrels & Spitballers: Writers and Hollywood in the 1930s (available exclusively from Black Pool Productions), that's a simplistic, overly romanticized representation, at least when it comes to those who toiled for the studios prior to and just after World War II. I tend to agree, though readers of my 2002 book Heartbreak & Vine: The Fate of Hardboiled Writers in Hollywood - itself influenced by the French edition of Garnier's book, published in 1996 - might think otherwise. But, as the former L.A. correspondent for France's Libération and author of Goodis: A Life in Black and White (2013) implies, the experiences of writers in Hollywood are too varied to make any such generalization either accurate or wise.

Given the economic conditions of the 1930s, it can’t even be said that writers fared all that badly by working there; indeed, in some cases, they saw their careers enhanced. Yes, they were exploited. Taking into account the economy, the culture of the era, and the studios for which they worked (corporate or cottage), it would be surprising if they hadn’t been. But even those working at the rock-bottom rate (around $150 per week) or on short contracts were, during the Depression, relatively well paid, leading lives at variance with most of their fellow citizens. The studios might have had a low opinion of writers, but then they had, as Garnier shows, a low opinion of all their underlings, save perhaps for their most profitable vedettes. So, naturally, they sought to keep their “schmucks with Underwoods” on the shortest leads possible. Clocking in and out might have been degrading for those hacking away in cubbyholes, but a Hollywood studio was, after all, a factory, albeit one where dreams were manufactured, to be eventually consumed by a viewing public in need of circuses as well as bread.

While Garnier concentrates on the years just before and after Franklin D. Roosevelt entered the White House with the promise of better times to come, some of the writers he discusses had careers that stretched far beyond the 1930s. It’s debatable whether the 1930s were, in fact, the most glittering of Hollywood golden ages; nevertheless, that decade was an opportune time for wheeler-dealers and chancers, storytellers the film establishment needed to script its newly talking movies and turn a profit for the industry. It was also a decade in which Hollywood film would solidify itself as an international art form and a prime export commodity. To emphasize the extent to which Hollywood films had already seeped into the public’s consciousness, Garnier prefaces the book with a quote from Daniel Fuchs, the formidable Williamsburg novelist and Hollywood screenwriter, saying that films are as indigenous as “our cars and skyscrapers or highways, and as irrefutable. Generations to come, looking back over the years, are bound to find that the best, most solid creative effort of our decades was spent in the movies, and it’s time someone came clean and said so.” While the first part of that quote is undeniable, the second part seems more applicable to industry types and film obsessives rather than the public at large. Film was certainly a mass preoccupation, and an effective opiate, but no more so than popular song in its various forms — though, admittedly, popular song, not to mention narrative writing, couldn’t help but reference Hollywood movies in one way or another.

(An Obscure Road to Hollywood appeared in the October 4th edition of the L.A. Review of Books. To read the remainder of the article, click here.)

Posted by Woody Haut at 2:18 PM No comments: