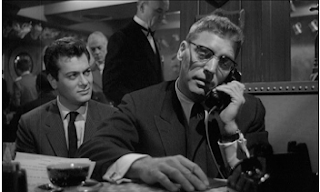 A nostalgia of jazz, location shots, and barely
palatable venom. Like a commodified theme
park, from 42nd to 57th Street, as American
as a twittering Confidence Man. Genuflecting
to celebrity worship and scandal, with predatory
behaviour, the sole constants in this warped
world. Take it from press agent Sidney- pimp,
beleaguered schmoozer, blackmailer,  stooge,
and liar- personals advertising corruption.
Where it's invariably cocktail hour and every-
one bleeds forever. Yes, we know humans talk
trash, faux pas run a mile, and humiliation is
said to have built the snowmobile. And still
unable to insert his clients into boss-man
Hunsecker's column. But to flex his verbals
on soiled movie stars and slimy politicians.
Hey, isn't that meant to be Roy Cohn. Yeah,
but it's always safer to cite the peeper and all
the ships at sea. Gloating over the film's low
box office figures, as J. Edgar twangs in his
back pocket. It's romanticised grit and gobs
of ambition that count. Mackendrick admired
Odets, though it would take four months to
revise his screenplay. Waiting for Lefty can
be an arduous time-warp. As for the shoot,
it was “Play the situations, not the words.
And play them fast.” With all that Broadway
poesy- “You’re a cookie full of arsenic” and
“The cat’s in the bag and the bag’s in the river.”
It did Mackendrick no favours, while Odets
went Wild In the Country. Oh, glorious hip-
shaking daddy, may you rest in Big Boy's
eternal embrace. That grainy black and white
suggesting the world might have ended circa
Sidney and J.J., but unfortunately we've yet
to notice. Too many ghosts,  so far to grovel,
wrapped in enigmas of burning celluloid,
stalking machines, as if we owned them. 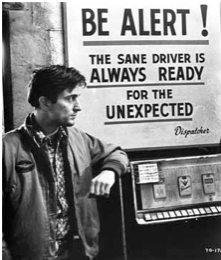 The beginning of the end, the end of the
beginning, or the end of the beginning
of the end. This shit-storm of everyday
violence, loose in Times Square. Nausea
and Pickpocket, twisted into urban decay
and post-gook trauma. Whether rural
Protestant or urban Catholic, any alcohol-
fuelled writer with an obsession for guns
and pornography might contemplate
suicide. Or choose to take this darkness
into darkness. And as for all that excessive
narcissisism, like a signifying monkey high
on exhaust fumes. Like that You looking
at me? riff. Whether in a mirror of convexed
reality, or warped screen delusion, it has
become nothing more than grist for future
clichés. Clearing the decks for some self-
contradictory angel of death, out to destroy
father figures and pimps alike. Wrapped in
an insomniac's post-Watergate theater of
cruelty, this “seeping kind of virus,” under
the sign of sweltering conditions, a garbage
strike, the stink and steam of a city that
once was a nation. Yes, in Weegee we trust,
but all others must go down in the crash,
rendering all those bald-faced images useless
when faced with a post-apocalypse haircut
and a hard-on for washing the scum from
these wretched streets. But history suggests,
fighting corruption is simply a precursor
to regeneration and gentrification, and every
urban crevice another corporate mutation.
A shrink is said to have tested thirteen-year-
old Jodie for emotional scarring. But what
about viewers? Hinckley might be channeling
everything Travis, but he's not the only psycho
to shoot for Jodie. Just the first, in search of
a body, hungry, for the many amongst so few.

Posted by Woody Haut at 3:49 PM No comments: