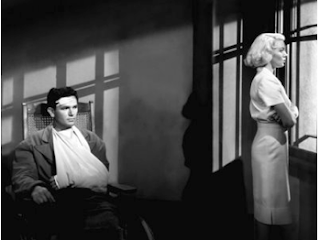 Lana’s lipstick rolls into the future, past
Garfield, into a land where we forever grow
bold, then punished for our pains. Where
luscious legs and white shorts, suggest a
sleazy tennis queen, rather than a bored hash-
slinger. Where instructions are such that not
even a postman can comprehend. An indelible
mark in a city where door-bells are essential, but
ill-used, whether twice, thrice or, if not, Ice.
Where loose change clinks payment in kind,
and firewater seeks its own Production Code.
Chiming noblese oblige: the customary
murder, a hint of sado-masochism, maladroit
lawyers and insouciant insurance investigators.
Living in a less than wholesome world, a sad
universe ruled by sleight of hand, swerving
whiffle balls and working stiffs. Where a
cynical private replaces that indifferent insurance
investigator, where Frank and Cora are guilty
as sin, sentenced to tear each other apart. That's
the American way, insisting the world be set to
rights, but not caring about the consequences.
To counter unfavorable publicity, Lana is
photographed on the set with two-year-old Cheryl.
Twelve years later, the blood seeps from Lana's
big dong gangster-boyfriend, the stains forming
question marks of suspicion. Laughter at a post-
shoot party Lana presents Garnett with a fur-lined
jock-strap, while the ambivalent Cain inscribes
faint praise in a leather-bound copy of his novel:
"For my dear Lana, thank you for a performance
even finer than I expected." Though he had never
expected much. Surely, when the doorbell rings,
hints of honesty disappears through the letter-box;
with no special delivery, to assuage the weak,
second-class ignorant, or recalcitrant hoi-polloi. 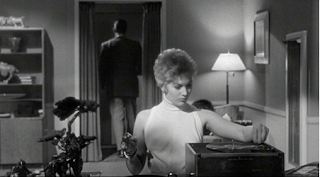 You don't have to be a sleaze-bag to carry a
torch for Kim, twenty-five years Fred's junior,
strutting that June-bugged street where you
live. A cop with a hard-on, so why wouldn't
she keep him on a short lead, playing him for
far more than he's worth. Anything to off her
crooked boyfriend, grab the cash and fade like
bad surf. With the line: “Money isn’t dirty, just
people.” Yeah, but,  if it isn't dirty, why bother
to launder it? Reeling him in, the bait and
switcheroo, forget the dosh, it's really love.
That might play in Azusa, but it's a sucker-punch
on the demeaning streets of Burbank, a push-over,
knowing it's only money through which  he can
possess- I mean, own- her. That story has been
rehashed so often it might as well arrive with
its own breakfast menu. Looking up at her,
the wounded Fred says: “We really didn’t need
the money, did we?" Kim scoffs, would that be
rhetorical, or you just happy to see me. Stopping
short of stupidity, not quite laughing, much less
spitting, in his face. A scene straight out of
The Indiscreet Charms of the Petit-Bourgeoisie.
But, wait, one mustn't ignore the sub-plot: Dorothy
Malone, stalked and spied upon by another cop,
the weird Phil Carey, who works overtime to turn
Dorothy into a suburban homemaker. No wonder
it's not to him, but her hostage taker, the wounded
MacMurray,  to whom she scurries. As though
Stockholm Syndrome has become a cultural
necessity. A revealing moment, but no more so than
Kim’s dress, an ideal commodity for scum-sucking
purveyors of public decency, or those who seek
clean surfaces,  in a Pat and Mamie kind of way.

Posted by Woody Haut at 9:40 PM No comments: