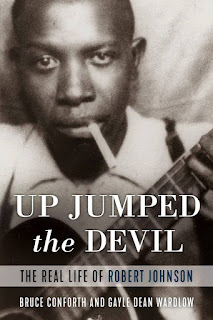 I would bet against there ever being a better and more informative Robert Johnson biography than Bruce Cornforth and Gayle Dean Wardlow's Up Jumped the Devil. Impeccably researched- something one has  come to expect from Wardlow in particular- the book sets out  to tell the story of Johnson's short life, and, in the process, fill in the various gaps in what is known, and to address those parts of his life that have remained a mystery. To the authors' credit, they have accomplished this, and, in doing so, have put together a highly readable and informative narrative. And it's about time. After all, Johnson has long been one of the greatest of the Delta bluesmen, but, at the same time, overly romanticized something which has  tended to obscure his place and even importance in the history of the music.

In setting the record straight, Cornforth and Wardlow track Johnson from birth to death. They do so by citing friends, family, and Johnson's contemporaries, including the likes of Johnny Shines and Calvin Frazier, who not only knew Johnson first hand but played alongside him. Some of the material here has been collected by others and has appeared in past publications. However, there is a great deal here that is new here. And nothing, according to the authors, that is not corroborated. Although I've read most of what has been written about Johnson over the last fifty years- until this book, the best being being Elijah Ward's Escaping the Delta: Robert Johnson and the Invention of the Blues- Up Jumped the Devil is going to be invaluable to anyone interested in Johnson or Delta blues. Having said that, I thought I'd put together, pretty much off the top of my head and in no particular order of importance, a list of what I learned, or maybe knew but  forgot, from reading Cornforth and Wardlow's book: 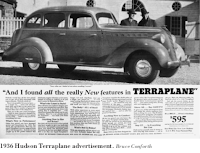 -Johnson was already proficient on guitar when still a teenager- though he was playing what is described by Cornforth and Wardlow, or their informantm as folk blues, rather than the deep blues with which he is  commonly associated. That Son House's famous assessment of RJ had  to do with the sudden realization that he now faced a competitor in RJ. 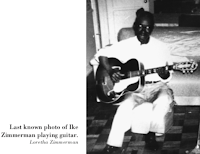 -That RJ went by a variety of names and nick-names, that he was subjected to what amounted to physical abuse by his step-father Dusty Willis. The latter wanted young Robert to work in the fields instead of playing music. Not surprisingly, RJ hated field work. Also, he enjoyed school, liked to read and was  sophisticated in his taste in music.
-That RJ was capable of playing complex chords, had a near perfect ear, could hear a piece of music on the radio and reproduce it at gigs later that evening. He was also capable of playing in the jazzier style of his musical hero Lonnie Johnson. According to Calvin Frazier and Johnny Shines, RJ could play practically any type of music, would play  tarantellas at Italian weddings, Jewish music at at Jewish weddings, etc.. 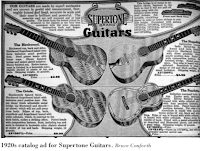 -Though RJ heard an array of Delta musicians, including House and Patton, and learned from them, his main influence was a local musician, Ike Zimmerman.
-That RJ  traveled widely, not only to Memphis, where he had immediate family, and Texas where he would record, but Chicago, Kentucky, New York, Detroit, Canada both on his own and in the company of Shines and  Frazier, to play music.
-That RJ kept a notebook, worked out renditions of songs and rarely varied the lyrics or melody.
-That RJ turned against religion after the death of his first wife and child while giving birth. He was nineteen at the time.
-That RJ's ambition was to play on Ted Mack's Amateur Hour, in the hope that it would be a springboard to national notoriety.
- That RJ didn't face the wall during his recording sessions out of nervousness but because he wanted to hide what he was doing from a group of Mexican musicians. He is reported to have often turned his back on musicians if he thought they were trying to steal his licks.
-That John Hammond Sr  kicked-off the misinformation surrounding RJ in his article that followed on from his Spirituals to Swing concert.
-That much of the material on RJ in Alan Lomax's The Land Where the Blues Began is, for whatever reasons, fanciful.

Of course, this is just the tip of the iceberg. There is clearly a great deal more in Up Jumped the Devil that's both surprising, illuminating and new. Interestingly, rather than simply debunking the various myths surrounding Johnson's life- meeting the devil at the crossroads, etc.- Wardlow and Cornforth spend time investigating the various beliefs common to the African-American culture at that time and in that place that behind such stories. Likewise, they do the same for some of Johnson's more obscure lyrics. While it remains debatable as to whether Johnson is the greatest of Delta bluesmen, when you finish this book you will not only know more about him, but you will definitely have a greater appreciation of him as a musician.
Posted by Woody Haut at 4:11 PM No comments: