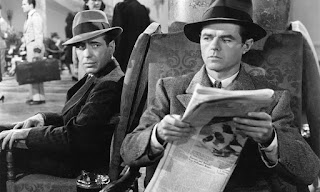 
Back before noir was noir, and only a
stained melting-pot, Spade had a thing for
vernacularisms. The young hood a gunsel,
Yiddish, guncil/gunsel, for thief, catamite,
or young tramp. Though deployed earlier
byTully and London who opted for gonsil.
Relating to gonnof/gonif, also meaning thief,
originally a pickpocket, and corruption
of gazoon(e)y. Derived from garcon or the
Irish gossom. Prior to that, deployed by
Dickens and Chesterton. Though for them
it was Dutch- the language of a trading
nation- in origin, also referring to a sodomite.
Which makes one wonder: does that imply
all thieves are sodomites, or all sodomites
thieves? Joel Cairo is certainly fat cat
Gutman’s gunsel. And, surely, Gutman
makes use of gunsels or gonnifs as required.
As for Spade?  He was doing it for Miles
Archer, whom, it's said, spawned a son, Lew,
as told by a K. Millar, aka Macdonald. And
Spade’s thing with Brigid? Spoiler alert, she's
a murderer, the bird’s a fake, and Spade,
besides tweaking prefixes, has no problem
shopping her. Because,“When your partner
gets killed, you gotta do something.” As for
Flintcroft, neither gunsel nor gonif, a close
call makes him the same but different, his dis-
appearance a vernacular of a deeper dilemma. 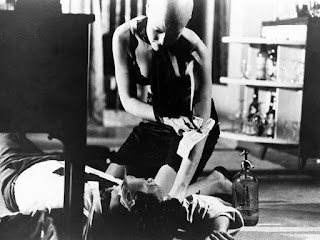 
Jazz, jerky camera, “I’m drunk, Kelly!”
Not even Maggie could handbag quite
like that. The pimp pulls  her hair. Fuck
me, it’s a wig.  Kelly, bald, knocks him
to the floor, takes his wallet. “I’m not
rolling you, you drunken leach" (or is
it lech?), I’m only taking the 75 dollars
coming to me.” Slaps him,  stuffs the
cash into her bra, delivers a final kick,
grabs a photo, looks in the mirror, and
re-wigs. Then the credits roll. Kelly
calmly applying her make-up.  Suspended
disbelief, no, makes that animation, bound
to be just another lamb to slaughter. Yet
there’s more: cramming money into
the brothel-keeper’s mouth; finding her
rich fiancé, Grant, molesting a child;
a one woman vigilante, she beats him to
death with a telephone receiver; tells Griff-
his friend, and her final john- that Grant
was a naked kisser, “the sure sign of a
pervert.” Though why or what is never
explained. Only Sam knows for sure.
Walking through that crowd, like some-
thing out of Night of the Living Dead.
Seeking redemption as much as revenge.
However lachrymose, a tabloid fantasy,
in which depravity is never far away,
and negativity, something like schmaltz
and loathing in small-town America.

Posted by Woody Haut at 9:42 AM No comments: