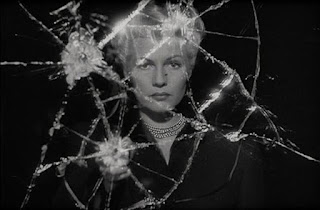 After the rescue, the inevitable: flirtation,
employment, sweet talk on hubby's yacht.
Eyes irresistibly twinkling. In the real
world, Cohn green lights the project only
after assuming Welles’s fifty grand debt.
As usual, it's all power to the capitalist class.
But, then, Cohn is said to have created Rita,
husband number one pimping her while
still a teenager. Of course, in Hollywood
everyone is owned by someone. Undeterred
in dreamland, Michael's brogue historically
screams murder. Ne touchez pas, Grisby,
wonders if he'd be willing to do so again?
Riffing on the cause du jour, Michael
simply says,  I'd kill another Franco spy.
After which Grisby replies, Would you kill
me if I gave you the chance? Should he,
given Rita, even deliberate? Would you?
Contemplating a life in Patsyville, Michael
remains philosophical, reminding Grisby
that Everybody is somebody's fool. As for
the mirrors, they only go to show that any
reflection is merely a state of mind, another
image of itself or something else. Splicing
the film to pieces, Cohn obsesses over
Rita's hair, demands more close-ups and,
of course, a Gilda-like song. What else
might intercede, albeit disfigurement, and
a world in which everything cracks, breaks
or is already broken. As Rita's doppleganger
says, You need more than luck in Shanghai.

It’s okay with me, things are what they are,
even when they’re not. A surfeit of shrugs,
wisecracks, topless hippies, alienated
wealth, crooks, quacks, or steroid-enhanced
thugs. It's the me-culture minus the stench
of fuck-you geckonomics. Marlowe, no
longer a lapsed petit-bourgeois oil lackey,
but a cat-loving, chain-smoking mumbler,
supermarket insomniac, secular Jew, singing
Mammy in blackface to the cops. Purists
have never had time for such revisionism,
while the impure amongst us can't decide
whether to laugh or cry. A blank slate,
Marlowe’s knightly virtues, naturally at
odds with a culture that could care less.
Not down these mean streets but across
road-raged freeways. Stylish bungalows
replaced by vertical brutalisms, glassed-in
beach front properties like centres for the
murderously insane.  Walking down that
tree-lined avenue, harmonica-in-cheek,
it's Hooray for Hollywood with an Astaire
shuffle. Such is the corruption, and cynicism,
gumshoeing into the distance, tarnished, ad
infinitum, beyond the before and ever after.

Posted by Woody Haut at 3:01 PM No comments: