Her legs crossed, propped-
up on a dressing-table. Eye
moving from slip to slippers.
Her right arm across stomach,
left hand resting on left knee.
Head tilted to the right. Not
yet thirty: if vulnerable, then
contemplative. Or vice versa.
Perhaps a neon hotel, refuge
from everything but the camera.
Lit to highlight the shadows.
Three profiles, two mirrors.
In one an open door, a towel
on a hook. Next to another door,
room or hallway. How many
doors to make a room, or an
exit? How many mirrors to
reflect the world? How many
profiles to glimpse a likeness?
And who would enter, if jealous
husband, roustabout lover or
predatory boss. She who might
murder, the desire to be human,
so human to desire. The tracks
parallel, meeting, crossing, straight
out of Europe, the entrance like
the exit, through the hallway,
door, shadows, reflection, desire. 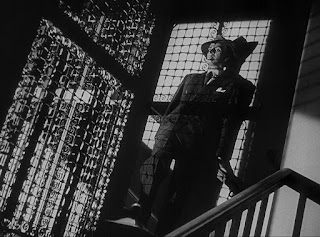 Walls, staircases, elevator shafts.
This must surely be why venetian
blinds were invented. City angles
dark rooms, claustrophobia, less
angelic than threatening. Zanuck
hated Tinseltown critiques, so took
it all to New York, with its nightlife,
square jaws, hats, and cosmopolitan
homosexual innuendo. Then why
shouldn't a woman be attracted to
the man who might have killed her
sister; then that man waking up to
find some inquisitive cop sitting
next to his bed. A droit de philosophe
turning into templated shadows, severe
lighting and a timely portentousness,
like “What’s the good of living without
hope?” Answer:  “It can be done.” Then
dogged by a fog of intention: “What she
meant we’ll never know. It’s what she
said that counts.” Even if no one knows
or cares what she or anyone says or
means, be it melodrama or comedy.
"Somewhere Over the Rainbow," a
reminder: this is a nearly recognizable
nightmare of geometric wit and deceit.

Posted by Woody Haut at 2:06 PM No comments:

Four More: So Many Doors by Oakley Hall, November Road by Lou Berney, Unholy Land by Lavie Tidhar, This Is What Happened by Mick Herron

Oakley Hall, So Many Doors (Hard Case Crime)
Praised  by Pynchon, Chabon, Richard Ford and Amy Tan, Oakley Hall has sometimes been referred to as a writer's writer. That could be the case, but it could also be something of a misnomer, since Hall was, if nothing else, a populist who had no qualms about pursuing a mass readership. After all, this is the person who wrote one of the great westerns, Warlock, that near-Marxist tale about an Arizona mining town. But Hall wrote  twenty-five other novels, most of them  historical in nature, invariably taking place in the west. His subjects included industrial disputes (Separations), the Mexican Revolution (Adelita) as well as Native Americans as well as the "taming of the west (Warlock, Bad Lands, Apache). He finished of a fifty-year career with the coming-of-age Love and War in California preceded by five novels featuring the infamous Bay Area journalist, wit, bon vivant, and disappearance artist, Ambrose Bierce. Published in 1950, and out of print ever since a 1959 edition, So Many Doors was Hall's second novel. It seems an unlikely choice for the Hard Case list of books. After all, one does not immediately think of Hall as that kind of pulp crime writer. But he did produce a handful of books that fit, easily or not, into that category, not only So Many Doors, but Murder City and Too Dead to Run. Set prior to, during and just after WW2,  the California-set So Many Doors moves  from Bakersfield  to San Diego, amidst graders, "cat skinners" and bulldoze drivers, their job being to flatten the land for future developers. But it's really a tale- like David Goodis's doomed lovers crossed with Jim Thompson's working-class malcontents- about the failure of men and women to understand one another, resulting in a kind of emotional sadism. All taking place in a world  in which everyone appears trapped, whether by class, job, or gender. That a murder has been committed seems as inevitable as the changing landscape and fortunes of the country itself.  (Published by Hard Case Crime in November)

Best of the Rest

Lou Berney, November Road (Morrow)
It's November, 1963, in New Orleans, just after JFK's assassination.  Frank Guidry,  a suave, middle ranking New Orleans crime boss finds himself peripherally connected to JFK's death. Realizing his life could be in danger, not so much from the authorities as from New Orleans crime boss  and assassination-fixer Carlos Marcello, he leaves the city and heads west, to Las Vegas where he hopes to seek sanctuary with a rival crime boss. Along the way he meets Charlotte,  travelling with her two kids and their dog.  She has recently ditched her hard-drinking but boring husband in Oklahoma and is also heading west. Though smart, she has no idea who she is dealing with. But, then, neither does Frank. One of those road novels that once you take the first bite, there is no way to resist the entire meal.

Lavie Tidhar, Unholy Land (Tachyon).
In Tidhar's latest, the Jewish homeland is in Palestina, East Africa ("It feels like a historical accident"), as proposed by some major Zionist figures in the early years of the 20th century. It's a world in which "there is still a Hitler, but it had escaped a Final Solution." Pulp detective writer Tirosh who lives in Berlin, returns to visit his homeland. He is meant to give a lecture, but wherever he goes mayhem follows him, and his original reason for being there gets lost in the mulch. All because he ends up searching for his niece who has gone missing. But this is not only an alternative world, one in which "you wonder what Jews are like when they are defined by the great Holocaust that shaped them, the survivors that formed of them creatures of power and guilt: more easy in their ways, more comfortable in their skin, or chaps just a nation as all other nations...," but an in-between world, where everything is breaking down and set to come apart at the seams. As usual, for a Tidhar novel, Unholy Land is prescient and nostalgic at the same time. If you know Tidhar's work- my favourite is still A Man Lies Dreaming, you won't want to miss this. If you've never read Tidhar, this is a good to start. You won't be sorry. (Published by Tachyon in November).

Mick Herron, This Is What Happened (John Murray)
Herron's This Is What Happened is a genuinely creepy tale, but one that, unlike his recent efforts,  does not center on, or have anything to do with, Slough House and that  group of marginal and much maligned British agents. And, I for one, was glad of it. No matter how much I enjoyed those novels, I was beginning to think Herron was stretching himself a bit too thin, and that he should set his sights on something different, if even for a book or two. The good news is that This Is What Happened  is every bit as good as the Slough House novels. This one takes place in London where a gullible, lonely woman, new to the capital, is kidnapped by a misogynistic, psychopath who, to keep her prisoner, feeds her a a false dystopic narrative.  It's both a novel, written in Herron's concise and spine-tingling prose, about misogyny, and a tale about how easily people can be manipulated on a steady diet of what can only be described as extremely fake news.  Though, after moaning that I was growing slightly tired of Jackson Lamb and his minions,  I found myself hoping they might pop up to save the day. Which I guess means I'm now ready for yet another Slough House episode from one of the finest writers around when it comes to espionage crime fiction.

Posted by Woody Haut at 1:50 PM No comments: