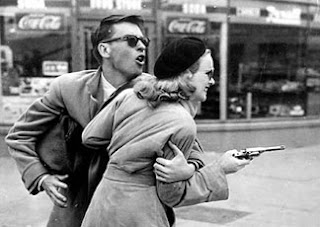 Another case of Godard getting
it right. Perhaps all you really do
need is a girl and a gun. Plus thirty
days and a black-listed ghost, star-
crossed by mutual obsession. Soak
and stir in delirious metaphor: trick-
shooter, gun stealer, carnival contest
winner, to prove whose is bigger, if
not best. Sleazily slipping on silk
stockings, threatening to walk if her
boyfriend isn't with the programme,
ready to swim in her hapless pit of
anxiety. Together seeking redemption
in a one-shot heist, from, not in,
the back. Why show the teenage
robbery- with ghost-laden precision-
when you can depict trembling smirks,
gazing into the past, while making
plans to finagle the future. Adrenalin
pumping gaggles of personas: tight
sweater, cowboy gear, beret, like
shapes of things to come, breathless,
amidst soiled prurience: quote “Your
cock has never been...a female dog
in heat." Perhaps that's just stating
an obvious ellipsis.  Better, if possible,
to scam the studio, Das Capital in
their pockets and Fuck you, League
of Decency on their backs. 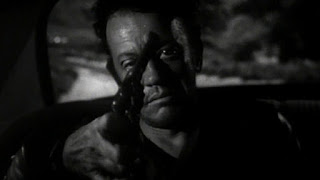 Fear of the other, past and
present. From picket-fence
and fishing trips to inflagrante
hitch-hikers with psychotic
tendencies. Is that tough love,
or, if pushed, simply physical
deformity- the hitcher's drooping
eye which, like Pinkerton's,
never closes. Breaking in this
new smog of paranoia, dragging
those hostages all the way to
Baja, tortured by a survival-of-
the-fittest spiel and the irksome
inadequacies of everyday life.
Like sharecropping desolation
row. If you don't believe me,
check the map: Lone Pine, not
far from the source of L.A.'s
water. Manzanar, where other
others were interned. Ida,
geographically sussed, riffing
on the dangers of an outstretched
thumb and proverbial obsession:
a stranger asking for help could
be a killer, a commie, or, worse,
a commie killer. But when have
non-drivers not been suspect?
Like paying in cash, thumbing
is a state of mind lacking in
negotiable currency. And Ida,
air-brushed, herself a hostage,
stuck in another kind of desert,
released for a price only after the
world had all but passed her by.

Posted by Woody Haut at 5:10 PM No comments: 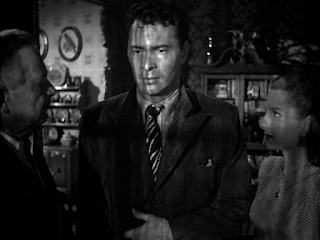 Old-world scar maps a familiar but seldom
visited country. Where arrogance and bravado
morph into fear and cabbage. Where fatalism
and tears flow like honey. So singer-obsessed
he's lost interest in his empire, gaming tables
located in the crevices of a diversified ice-cream
parlour. What about an ad in the classifieds:
corporation seeks new emperor of ice cream,
greased by a seam of sleazy modernity. Apply
to melt this frozen empire. Total liquidation,
everything slashed. Unreasonable love, hidden
to heed the voices. Knowing power will soon
be as negotiable as a two-dollar bill. So stylised
its scheming, one expects Gene Kelly to enter
the frame, a leap of faith across a rain-ridden
Coney Island boardwalk.“You know what my
sins were?" asks Shubunka, a yid too far for
the studios.  "That I wasn’t low and rotten and
dirty enough.” With politicos still seeking less
with more than ever, a final grand gesture
skinned of old world remnants, slight accent,
cigarette smog, heart attack sandwiches and
decayed lungs. Grist for a melodrama that turns
on an empty soap box, the politics of poetic
realism searching the gutter to touch the stars. 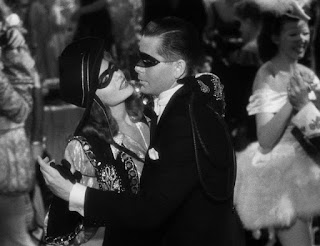 
A sluice of post-war Nazis sleazing it up
down Argentina way. And that song,
exotic turbulence churning routine, from
self-preservation or convenience, the singer,
displaying a metaphorically-stained dress
Bill might have denied denying, and her
Nazi, tie the knot, unpredictably gordian,
entangled by a roving gambler with a case
of tango tumescence, rubbing his recent
past against her precarious future.  But that
fucking Nazi should have known hiring
a gambler to run a casino, tweaking his job
description to include spying on a libidinous
wife, was a hedge too far. A wall beyond
which to fixate on his sword-tipped cane
affectionately called my little friend. While
an array of sycophants quack dubious dialectics,
maracas shake, hearing hubby's plane bubbling
under troubled waters. Disentangled to marry
the lone stranger, who too will soon learn to
grovel. As for the Nazi, they rarely die with
such aplomb, floating shark-infested seas,
treading wetness until the fish cry mercy, the
Argentine cows come home, and the blame
is put on...a weapon of mass dysfunction, as
euphemism for a greater obscenity. “Men
fall in love with Gilda," she said, "but they
wake up with me.” No wonder out of all
her films, it was only musicals that Holly-
wood's closet chicana could bare to watch.

Noir This, Noir That: Understudy For Love by Charles Willeford, The Original Adventurers of Ford Fairlane by Rex Weiner, Only to Sleep by Lawrence Osborne, The White Devil by Domenic Stansberry, People Only Die of Love in Movies by Jim Ridley

Charles Willeford, Understudy For Love (Hard Case). Available for the first time since its 1961 publication.  A housewife has killed her two children and herself, and  Richard Hudson, here a cynical newspaper reporter rather than the cynical car salesman in The Woman Chaser, investigates the matter. Clearly a novel no Willeford fan will want to miss, while anyone who has yet to encounter this trickster of all things criminal, will find themselves, for better or worse, at the deep end. Probably not Willeford's best, but even so it's better than most and more than worth reading. Who knows, maybe someday the likes of  Hard Case  could even find a way to negotiate the publication of that most infamous of Willeford novels, Grimhaven. What a coup that would be. Or am I dreaming?

Rex Weiner, The Original Adventures of Ford Fairlane (Rare Bird).
Forget that horrible movie based on these pieces, reproduced here for the first time in their entirety. Originally written for the L.A. Weekly and New York Rocker back in the 1980s, they comprise when taken together a fast paced novel that, if nothing else, conjures up a specific time and place. Written in a mock-Chandler style, and fuelled by adrenaline and other substances, these pieces have an undeniable charm and humour, not to mention an almost archaeological presence, with depictions of long gone  L.A. and New York's iconic streets, night spots and personages. Read it and wonder why time never stands still.

Lawrence Osborne, Only to Sleep (Hogarth). Osborne is certainly one of the more interesting writers around these days- my favourite of his is Bangkok Days- but he's set himself a monumental task in writing a Philip Marlowe novel. For me, trying to write in the voice of an established crime writer is invariably a losing proposition- apologies to the likes of Banville, Atkins, Coleman, Parker, etc. To even half-way carry it off necessitates some major writing chops. And to  undertake it takes no small amount of courage. Osborne is an excellent writer, but he, like most others, isn't quite up to the task.  Yet it's a nice idea, a 72 year old Marlowe (sometimes it seems that Osborne is writing about Chandler rather than his protagonist) in 1988.  And there are definitely some hauntingly beautiful passages. But Chandler, Osborne is clearly not. Nor, for better or worse, could anyone else possibly be.

Domenic Stansberry, The White Devil (Orion). This is 17th century playwright John Webster crossed with the Amanda Knox case, all of which Stansberry filters through his dark imagination. A story of money and power that moves from Rome and Spain, to Beverly Hills and Malibu. Particularly evocative are passages describing Rome's Felliniesque streets. A young aspiring actress, Vicki with a more than shady past and Texas roots, is married to a fading playwright. But we soon discover that she has a considerably more  intense relationship with her manipulative half-brother. Her brother introduces her to a wealthy, but married, Italian politician. It isn't long before the  politician's wife is found dead, apparently just one of a series of murders. All of which leaves  the reader wondering not only who might be responsible for the various cross-continental murders, but Vicki's  relationship with her half-brother, and whether or not she might simply be a fantasist. Reminiscent of Highsmith ar her best.

Jim Ridley, People Only Die of Love in Movies (U. of Vanderbilt).
The odd one out, in that it's a book of film reviews rather than a novel. But  deserves to be mentioned. I have to admit I'd never heard  of Jim Ridley until William Boyle posted something about this posthumous collection, after which I immediately wanted to read this book.  I wasn't disappointed, realizing after only just a few pages that Ridley, a regular contributor to and editor the Nashville Scene, was one of those writers who are stylists without, it seems, ever trying to be. Moreover,  Ridley was one of the best, and most soulful, reviewers around.  So why hadn't I heard of him before? I suppose it's one of the downsides to living across the pond. What Ridley shares with the best critics, whether Kael, Faber, Ferguson, Rosenbaum, etc., is that what they write is always  of the moment, yet invariably has lasting value.