Miles Davis liked to say he could tell what kind of musician someone was simply by the way they walked and dressed. I was reminded of that when I found myself thinking about the first time I encountered the late great chronicler of the American southwest and the US-Mexico border, Charles Bowden. I was listening to the World Service while temporarily living in France some years ago. Suddenly, for no more than three or four minutes, there was this voice... Talking about the drug wars and violence in Juarez which, at the time, was only just hitting the news. I remember thinking, who is this guy? Up to then I'd ever heard of Charles Bowden. But from hearing that voice I knew I had to get hold of his books. Because I somehow knew this was a real writer, someone who not only spoke with a certain gravitas, but who doubtlessly wrote from experience, and clearly acquainted with death and tragedy, as well as the beauty of the natural world.

When I did get around to reading Charles Bowden I was certainly not disappointed. His true crime books about border issues, particularly the drug wars- Murder City, El Sicario, Dreamland, A Shadow In the City- are unparalleled. And his books about the desert are as evocative as they are  heartfelt. All of which are  beautifully rendered. You can pretty choose a paragraph at random, like the one I came across over breakfast this morning:
"Down in the pit some heavy metal band is thrashing out harmonics and a small mob of kids is slam dancing in the afternoon sun. Young women walk past with blank eyes, tattoos, large breasts and a perfume that kills hope with one whiff. The young men shuffle past with homicide eyes. I am staring into the triumph of the industrial revolution, complete with cleavage. Here are all the people no factory whistle calls." 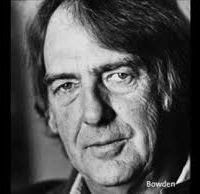 Naturally, I began to collect as many of Bowden's  two dozen or so books that I could find and afford. And what I can say is that there is probably more truth in a single Bowden paragraph than most writers are able to throw together in an entire book, or maybe even a lifetime of writing books. So I was pleased to hear the University of Texas through Lannan and something called the Charles Bowden Publishing Project are on the case, and have churned out a series of  well-presented Bowden reissues and at least one original, The Red Caddy- Into the Unknown with Edward Abbey. And it's this latter book that I primarily want to talk about.

It is, at the title indicates, a tribute to Abbey, that cantankerous author of Desert Solitaire and The Monkey Wrench Gang, amongst many others. Abbey, the conflicted writer, and, as Kris Kristofferson put it all those years ago, "a walking contradiction/partly truth and partly fiction." Not to mention Abbey  the reluctant spokesperson for any number of radical environmental activists, "monkey-wrenchers" as they are called in the parlance.

Bowden's short tribute- barely a hundred pages, with an intro by his friend Luis Alberto Urrea- shifts between his personal encounters and thoughts about Abbey, to preparing and attending a conference on the late author. A conference that Bowden dreads attending, and one that he knows Abbey himself would never have come within ten miles of. In between, Bowden does his best to demythologise Abbey- he "wasn't complicated, just ornery"- never once shying away from his more outrageous beliefs, while, at the same time,  pointing out what made him an interesting writer and friend. The title alludes to a car that Abbey purchased late in life as a gift to himself, a car that Bowden casually refers to as "an obscenity." Of course, that purchase was typical Abbey, the revolutionary with retrograde views on a range of subjects, such as   immigration, political correctness, women, etc.- sounding like a cross between Che Guevara and a Trump voter, though I doubt if Abbey, ever the anarchist, ever in his life  countenanced voting for anyone.

It's a moving testimony, and Bowden's prose is as hard hitting as ever. Okay, so it's really little more than a puffed-up piece of journalism, but what journalism it is, with any number of memorable passages, such as the the following, in which Bowden, in the first page or two, lays it all on the line:
"To unravel something, you have to have as thesis. But to understand the dead ends, back alleys, and side roads of life itself, you have to mistrust your thesis and constantly keep an eye on it lest it blind you to detail, contradiction, lust, love, and loneliness. I can't write about a friend and make it neat and tidy until I intend to kill my friend. And this is not my intention."

If you like Red Caddy, you will certainly want to read two other recently published University of Texas/Lannan Bowden books: Desert: Memoirs of the Future, originally published in 1991, and Red Line, originally published in 1989. Both seem as relevant now as when they were first appeared. With Bowden's voice, the one I first heard on the BBC all those years ago, coming through  on every page, the reader quickly realises that these days Tuscon's desert rat, the man with the pet rattlesnake, is missed more than ever. While Miles might have been able to tell the worth of a particular musician by the way he carried himself, for a writer, it's the way he or she talks- the tone and  ability to vocalise a world view- that matters. That's I see in Charles Bowden and what Bowden saw in his friend Edward Abbey.
"He lived in a moral universe. Beneath all the sexist barbs, the racist wit, the meanness, the pranks, the stunts, the anger, the episodes, the constant laughter and mirth, he inhabited and consciously expanded a moral universe. One where cleverness and normal standards of success don't count for  much but right and wrong count for pretty much everything. Ah, one life at a time, please, but still a real life."
Posted by Woody Haut at 5:27 PM No comments: 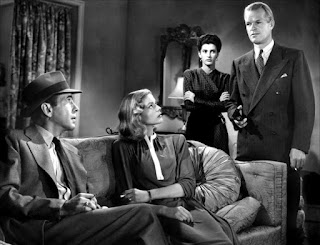 No point summarising, neither could
Chandler or Hawks. Bogart-Bacall
mouthing Chandler-Faulkner-Brackett.
Set pieces, anxious double-entendres.
Elusive, like a re-financed dream, or
suburban tracts, fuzzy around edges.
The title: what we've yet to awake
from. Nascent spaghetti freeways in
a land where dicks rarely walk. Down
what mean streets? As if automobility
were enough, or protection? Those
bonnes mots now rampant, quick,
artificial, if left to the imagination,
like “butchering on the parlor floor.”

Posted by Woody Haut at 2:07 PM No comments:

On Dangerous Ground: Film Noir Poetry, from Asphalt Jungle to Woman On the Run

“Ontology! I’m just
telling you a story
about this projector, that’s all.” 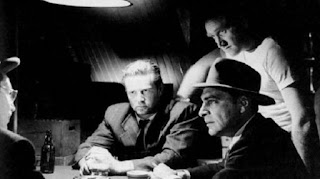 Mix a criminal mastermind, tough-guys,
double-crossing suicide. Hard-boil to
urban decay. Greasy Emmerich swindling
hooligan-employees. Soft-boiled Marilyn
knowing she’ll soon have it all. But,
Sterling, keep your eyes on the recipe.
Farm-hands have problems of their
own. Down Mexico way, Maddow typed
while Huston strutted. Which begs the
question: the state of things or capitalism
on its uppers? Goutez-vous. Crime in
a culture based on theft? Dix, dying
alongside a disinterested horse, unlike
Mr Ed, drugged mule Frances, who
hasn’t the chops to tell it like it is.

Too many books, too little time. However, these are among the best that have come my way over the last couple of months:

-Green Sun by Kent Anderson (Mulholland Books). Noir cop adventures unlike any other. Takes up from where Anderson's Night Dogs left off. Which if you  haven't read, you should immediately track down. And if you have read it, you know what you are in store for with Anderson's latest. Vietnam vet Hanson is now perusing the streets of Oakland, wondering, of course, if it's worth it. I imagine that Anderson's books are as close as it gets to telling like it is when it comes to the politics of being a cop.

-South Atlantic Requiem by Edward Wilson (Arcadia Books).  Wilson once again proves himself to be one of the best around at tracking late 20th century UK/US spook connections. His seven novels constitute a virtual history of that period.  His latest, which of course features his favourite MI6 agent William Catesby, concerns the Falklands War. About time that some novelist lifted the lid on that one, with its sordid, Trump-like crimes. And there's no one better suited to the task than Wilson.

Ivory Pearl by Jean-Patrick Manchette (NYRB). Perversely, perhaps, this has long been my favourite Manchette novel, finally available in a superb translation by Donald Nicholson-Smith. Unfortunately, Manchette died before  finishing it. However, his son, Doug Headline, was able to put the finishing touches to it. Manchette believed the polar had hit a deadend, and this was, for him, the future of hardboiled nor.  Which is to say, to open the genre to the ins and outs of global capitalism, and let the bodies fall where they may. Set for the most part in Cuba's Sierra Maestra mountains in the 1950s, around the time of Castro's landing, Ivory Pearl reads like a cross between Ross Thomas and John LeCarré, with, of course,  the political engagement of Manchette, ever the  unreconstructed soixante-huitard, thrown in for good measure.

-Body & Soul by John Harvey (Heinemann). Ex-cop Frank Elder, with whom most  Harvey readers will be familiar, is now on his own, living in Cornwall. His daughter, the victim of a vicious attack in a previous novel, is now scrambling to make a life for herself in London. She lands a job modelling for a highly-rated but personally suspect artist, later found murdered. Not that one has to work hard to suspend one's disbelief, because, as usual, Harvey's characters are believable, his locales evocative, and his humanity crystal clear. Moreover, the portrayal of the thin-skinned but compassionate Elder as he as he negotiates the dark side of the art world and his own demons, is never less than touching. 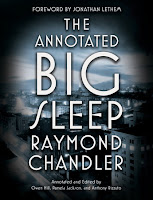 -The Annotated Big Sleep by Owen Hill, Pamela Jackson and Anthony Rizzuto (Vintage Crime/Black Lizard). A must for any Chandler obsessive.  It also happens to be one of the most entertaining, perhaps funniest, books I've read for a while. Everything you wanted, and maybe didn't want, to know about Chandler, The Big Sleep, and the world around it. Any serious Chandler reader will know some of the information, but what they will probably enjoy best is when the book best ventures off-piste exploring tangentially related bits of information. So pour yourself a gimlet and enjoy The Big Sleep as you never have before.

-I'll Be Gone In the Dark by Michelle McNamara (Faber). Generally, I don't read  much true crime, but McNamara's book is as much about her  obsession with the Golden State Killer who raped and murdered women for more than a decade, as anything else. We now know someone has been arrested for those crimes. One naturally wonders if McNamara's book had anything to do with the suspect's arrest. McNamara, who grew up in the area of Northern California where the crimes took place, fills her book with grisly details, but the most interesting aspect, at least for me, are those parts in which she writes about herself, her background and her obsession with the case. She died before completing her book, but  true crime writer and researcher Paul Haynes teamed up with McNamara's husband Patton Oswalt to add the finishing touches. A fascinating and absorbing investigation, wonderfully written, and, despite its subject, impossible to put down.
Posted by Woody Haut at 11:45 AM No comments: