In the Tower of Song: Steve Erickson's Shadowbahn

"I said to Hank Williams, how lonely does it get?

Hank Williams hasn't answered yet.
But I hear him coughing all night long
A hundred floors above me in the Tower of Song."
Leonard Cohen

Steve Erickson, who's long been one of my favorite writers, really has only one subject, which is to say America: what it is, what it might have been, and what it could be. No more so than in his latest novel,  Shadowbahn, in which he presents an alternative narrative, drilling down deep into the culture to expose present day fissures, in an attempt to arrive at the heart of the heart of the country.  He does this by taking various perennials: music, the open road, and characters motorvating those shadowy and ill-defined blue highways, to find a point where the past, present and future converge, and where that  elusive sense of history can finally be grasped, if not defined.

As usual in an Erickson novel, it's the process that matters, those roads and places as much dreamscape as landscape, its  characters invariably in transit, taking the back roads between places and states of mind. Having said that, the framing of  Shadowbahn is simple enough:  the Twin Towers is spotted by a trucker somewhere deep in the Badlands. On the bumper is a sticker saying SAVE AMERICA FROM ITS SELF, a slogan he can't quite get a handle on.  So the reader is thrown into a land not so much bad, as neglected, often patronisingly painted as flyover red, part of what, in Shadowbahn, is referred to as the Disunited States. It's a post-vinyl flip-side of our here-and-now nightmare. The towers stand like two twin speakers so natural in their  woof and warp that music emanates from these Towers of Song, though more Eno-ambient than Dylan apocalyptic.

It's all about twins, in fact.  Or dualities. At the core of the novel is Jesse, the lone inhabitant of  one of the Towers, who also happens to be Elvis's stillborn twin. In the Shadowbahn world, it was Jesse who survived and  Elvis who died at birth. Though Jesse can't sing a lick, he writes strange articles about a music-  from Bird and Coltrane to an obscure Elvis-influenced British band in Hamburg- few have heard. Moreover, music comes from Jesse, though it's  not in his voice, but that of his stillborn brother. No wonder the music magazine he writes for thinks Jesse has gone off the deep end.

Because Shadowbahn takes place in a world that might have been had Elvis not existed, the Beatles never got much further than Hamburg. Which meant that John Lennon ends up in a secondhand record store, and eventually becomes homeless. Such was the spirit of the era that even JFK is affected, never becoming president, but, permanently in a wheelchair dreaming of his senatorial past, spends his time gawking at young women as they enter and leave Warhol's Factory. And so music, at least the white rock variety, which a Malcolm X type character understandably critiques, is severely curtailed. Though Parker and Zena, siblings- one black, one white- who travel those secret highways on their way to their mother in Michigan, hold bits of that other strand of American music on taped playlists compiled by their father, which gives them, in turn, a kind of significance, as well as a degree of leverage over others. 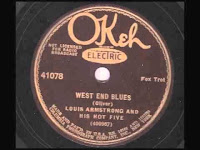 "Regions seed from the nation, states from regions, cities from states. By midcentury the recently formed Arklahoma Christian Conglomerate applies to the World Trade Organization for a patent on 'America' under the Trade-Related Intellectual Property (TRIP) agreement. A rage of countersuits is filed by other northwestern-hemispheric entities. Attempting without satisfaction to assess the petitions by typical standards of singularity, functionality, and precedent, the organisation's council ultimately gathers representatives for the various claimants in a locked conference room where, stripped of all digital resources, each imposed a question with the understanding that the patent for 'America' legitimately belongs to whichever answers correctly: Who recorded 'West End Blues' in June 1928?"

Living in such shadows can only obscure the road, making any destination ill-defined and barely reachable. It's the music that paves the way.  After all,  the highway and music have long been intertwined? And what, according to Erickson, America has given to the world. No matter that the music has been appropriated, dependent on the country's original sin as much as on its warped exceptionalism. And so Shadowbahn- laid out in twin paragraphs with headings that could be song titles- implies that it is a matter of who can navigate those blue highway as much as who possesses the music.

One can argue until the cows come home whether this is Erickson's best book, but for me it might well be his most important and timely in a series of important and timely books. Not only because these days one often has the feeling of being ensured in some maniacal alternative reality, but because Erickson's book demonstrates the degree to which one takes for granted the narrative to which one's grown accustomed, and how easily that narrative can be blown to rags. No one writes about such matters like Erickson, an inveterate  left-coaster, who has made a career out of exploring not just the edge but how it relates to our continental drift in general. At times Shadowbahn's love for, and obsession with, music and its significance reminded me of the kind of thing the likes of Richard Meltzer and Sandy Pearlman used to indulge in during the early, and heady, days of Crawdaddy. We've come a long way since then. Now, with information moving  faster than a speeding bullet, and more powerful than the most mind-warping loco-weed, it's all about sequencing, turning those playlists Parker and Zema possess into relics of the past. Now it's all about  algorithms and those who create and control them. One can only hope the Tower of Song somehow keeps on keeping on. This as everything falls apart around it. As they do, Shadowbahn is not so much a what if... but an if only... novel.
Posted by Woody Haut at 1:15 PM No comments: