Heartbreak On the Margins: A Manual For Cleaning Women by Lucia Berlin, edited by Stephen Emerson 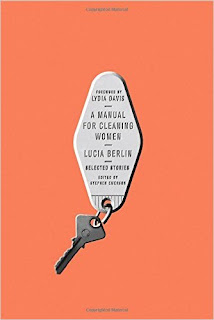 I always like to say to those who haven't had the pleasure of reading Lucia Berlin's stories, that doing so will, in all likelihood, break your heart. At the same time, I do sort of envy anyone coming upon her stories for the first time. To discover  a writer of her ilk doesn't happen very often. No matter that she has been neglected, or, at any rate, a well-kept secret for far too long. I guess my discovery of Berlin's work came at some point in the mid-1980s through small press editions of her work by the likes of Turtle Island, Poltroon and Tombouctou Books. Naturally, I immediately fell in love with her writing. Re-reading those stories as well as the few I hadn't previously come across that comprise A Manual for Cleaning Women, edited by Stephen Emerson, makes me admire her work all the more. Because what's more than apparent is that these stories come straight from the heart, and can be simultaneously humorous, sad and touching.  "I don't mind telling people awful things if I can make them funny," says one of her narrators. Not to mention her voice, range and subject matter.

Born in Alaska in1936, Berlin, over the years, led a somewhat peripatetic existence, moving from Idaho, Montana, and Texas, to Chile, New Mexico, Berkeley and Denver. Her stories follow a similar path, with protagonists, most of which are thinly-disguised versions of herself, trying to find a place in the world, gravitating, by choice or circumstances, towards the margins and those who inhabit that space. Because it's a place where friendship and community come cheek-to-jowl with isolation and exploitation, these stories and vignettes, revolving around cleaning women, hospital workers, the poor, struggling mothers alcoholics, the physically deformed, take place in landscapes and conditions Berlin knew all too well, having spent years struggling with alcoholism and other maladies. Even in the earliest stories, for which I have to admit I harbour a preference if only because those happen to be my personal point of discovery, Berlin's voice, range and eye for detail is more than apparent. Take Angel's Laundromat: "Traveling people go to Angel's. Dirty mattresses, rusty high chairs tied to the roofs of dented old Buicks. Leaky oil pans, leaky canvas water bags. Leaky washing machines. The men sit in the cars, shirtless, crush Hamm's cans when they're empty." Or Manual For Cleaning Women- "The bus is late. Cars drive by. Rich people in cars never look at people on the street. Poor ones always do...in it sometimes seems they're just driving around, looking at people on the street. I've done that. Poor people wait a lot. Welfare, unemployment lines, laundromats, phone booths, emergency rooms, jails, etc.." Over the years, while her voice remains pretty much the same, her range increases, while her eye becomes increasingly observant and accurate:

We sold chances everywhere. Hotels and the train stations, the USO, Juarez. But even neighbourhoods were magic. You walk down a street, past houses and yards, and sometimes in the evening you can see people eating or sitting around and it's a lovely glimpse of how people live. Hope and I went inside hundreds of houses. Seven years old, both funny-looking in different ways, people liked us and were kind to us. "Come in. Have some lemonade." We saw four Siamese cats who used the real toilet and even flushed it. We saw parrots and one five-hundred pound person who had not been out of the house for twenty years. But even more we liked all the pretty things: paintings and china shepherdesses, mirrors, cuckoo clocks and grandfather clocks, quilts and rugs of many colors. We liked sitting in Mexican kitchens full of canaries, drinking real orange juice and eating pan dulce. Hope was so smart, she learned Spanish from listening around the neighbourhood, so she could talk to the old women. (Silence)

The only reason I have lived so long is that I let go of my past. Shut the door on grief on regret on remorse. If I let them in, just one self-indulgent crack, whap, the door will fling open gales of pain ripping through my heart blinding my eyes with shame breaking cups and bottles knocking down jars shattering windows stumbling bloody on spilled sugar and broken glass terrified gagging until with a final shudder and sob I shut the heavy door. Pick up the
pieces one more time. (Homing)

Or perhaps it's her uncanny ability to juggle time, place and emotion in a montage that's more literary than cinematic. In a sense, she, like fellow story writer extraordinaire Lydia Davis- who. along with Emerson, contributes a welcome and perceptive introduction to this volume- shares an eye and sensibility with a certain strand of modernist poetry. Not surprising, then, that the poet Ed Dorn was one of her biggest advocates, as was Robert Creeley. Of course, there will be comparisons with widely read writers like Paley and Carver. But Berlin is different from either. Less in her avoidance of chat than her tendency towards the particular, exposing the general only when it becomes, as in the story Good and Bad- so obvious it hardly needs stating:
At first the place seemed to be deserted, miles and miles of dunes. Dunes of stinking, smoldering garbage. After a while, through the dust and smoke, you could see that there were people all over the dunes. But they were the color of the dung, their rags just like the refuse they crawled in. No one stood up, they scurried on all fours like wet rats, tossing things into burlap bags that gave them humped animal backs, circling on, darting, meeting each other, touching noses, slithering away, disappearing like iguanas over the ridges of the dunes. But once the food was set up scores of women and children appeared, sooty and wet, smelling of decay and rotted food. They were glad for the breakfast, squatted, eating with bony elbows like praying mantis on the garbage hills. After they had eaten, the children crowded around me, still crawling or sprawled in the dirt, they patted my shoes, ran their hands up and down my stockings.
And because she has an affinity for those down on their uppers, whether due to illness, lack of money, excessive drinking, soured relationships or fate, her work is even grittier and more determined than Carver's. There's no posturing here, just the elusive reality of everyday life viewed from awkward angles. Perhaps a more apt comparison might be with Fielding Dawson, whose near-perfect stories from the late 1950s through the 1970s were similar in their pursuit of the autobiographical, whether real, invented or simply tweaked by a fertile imagination.  "I exaggerate a lot," says another of Berlin's narrators, "and I get fiction and reality mixed up, but I don't actually ever lie." Yet, for better or worse, Berlin's stories are not as psychological, intense or stylised. In the end, Berlin's stories live in their own circumscribed world and sphere of influence. Davis is correct to point to Berlin's pacing, her naming and her sensitivity to language. That Lucia Berlin should be widely read is obvious, hopefully this elegant and overdue volume will make that possible.

For more information, including a short biography and plenty of photographs, see the Lucia Berlin website.
Posted by Woody Haut at 4:37 PM 2 comments: