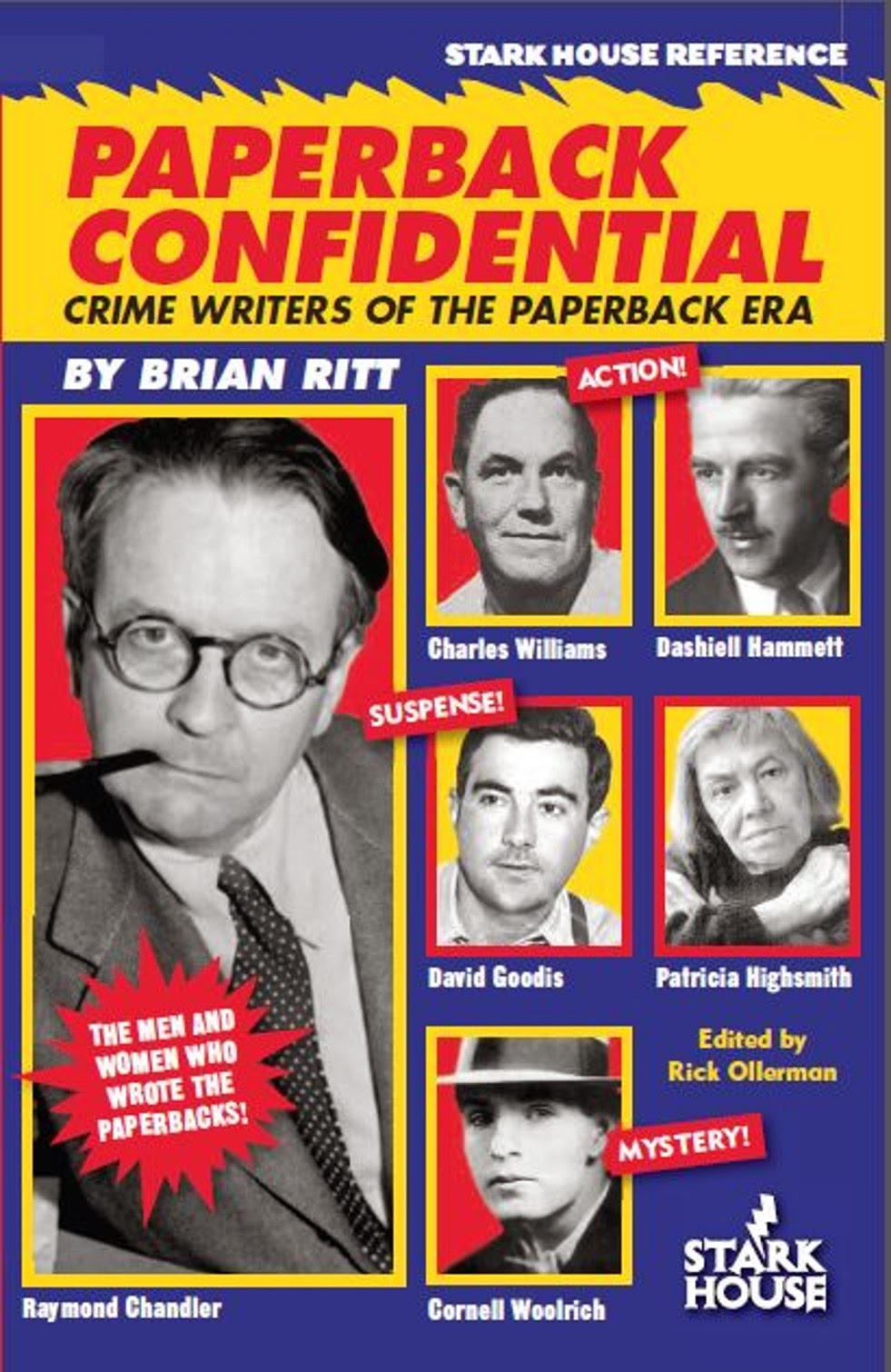 Paperback Confidential, put together by Brian Ritt, is the latest and, in my opinion, the best encyclopaedia-reference book when it comes to paperback pulp writers. At least in English. Its cover recalls the heyday of the scandal sheet, Confidential, and shows the famous and the infamous, in this case, Chandler, Hammett, Highsmith, Goodis, Woolrich and Charles Williams. But there are many other writers inside the book's covers, some  well known, and some not so well known, like John Trinian, Malcolm Braly, Elisabeth Sanxay Holding and Benjamin Appel.  No, Ritt does include everyone. How could he? So there's no mention of writers like Mary Holland, Jay Thomas, George Milburn, Robert Ames, Vera Caspary, Robert Finnegan or Daniel Fuchs. Nevertheless, there's enough ammunition here to last a lifetime. Ritt includes,  under each writer's name, a biographical entry, as well as a bibliography, and writers one might also like, many of whom are not included in this book, which makes Ritt's volume even more expansive. My only criticism, other than the various noirists left out, would be that the cover misplaces the importance or, at any rate, the emphasis of the writers included, putting them in the category of scandalous rather than transgressive, political or subversive. But that's only a minor point, because,  if you're after an  overview of the genre, from the Depression the present, you'll want to get hold of Ritt's book.

While pouring through Paperback Confidential, I couldn't stop thinking about how much easier these days it is to find  information on writers of crime-noir fiction than when I was writing Pulp Culture in the mid-1990s. On the other hand, for me, tracking down information was  part of the fun of writing Pulp Culture, followed by Neon Noir and Heartbreak and Vine.  Though no doubt about it, had Ritt's volume been available, it would have made the writing of those books a much simpler process. But at the time there wasn't anything like it around, at least not in English. What was available was Geoffrey O'Brien's groundbreaking Hardboiled America, followed by a small handful of books over the following years. Like  Lee Server's Over My Dead Body and Danger Is My Business, followed a number of years later by Pulp Fiction Writers: the Essential Guide to More Than 200 Pulp Pioneers and Mass Market Masters. The latter not a bad book, but not nearly as comprehensive as Ritt's volume. Likewise, Arthur Lyon's Death on the Cheap. Not forgetting the essays in Gorman, Server and Greenberg's anthology The Big Book of Noir.

In the writing my books,  I mostly relied on information from French publications. I remember pouring over a copy of Les Ecrivains des Etats-Unis, 1800-1945, published by L'oeil in magazine format, and given away for free that I found in the window of a bookstore in Perpignan.  That must have been sometime around 1992. Then at that same bookstore, I saw and bought a copy of Mesplede and Schleret's Les Auteurs des Serie Noire: Voyage au bout de la Noire. That was just what I needed. That was followed, a decade later, by Mesplede's more comprehensive, and, for me, indispensable, Dictionaire des litteratures policers, in two volumes, published, as was Les Auteurs..., by Joseph K.  These days, with the likes of  Paperback Confidential, the relevant information has become fairly accessible. Likewise, the reprints of the novels themselves. No need to scour around secondhand stores. You can just sit in front of your computer and order all those rare books on the internet, albeit at inflated prices. Nor is there any need to learn a foreign language or travel to a foreign country to acquire some fairly routine information. No doubt one of the wonders of the modern world. Though, of course, something has been lost in the process. Still, if you want to keep up with the novels and their authors, Brian Ritt's Paperback Confidential is a good place to start.