Half World by Scott O'Connor 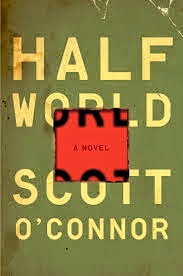 One wonders why there haven't been more novels about the MKULTRA, the CIA-run mind-control program that ran from the 1950s through the early 1970s, in which unsuspecting subjects in cities like San Francisco and in various prisons and mental institutions were given drugs such as LSD to break down their  personalities and brainwash them.  As the dark side of the era, it certainly makes a good subject on which to base a novel. Covert action, the manipulation of identity, voyeurism, paranoia, brainwashing: what more could you ask for? True, any official documents  concerning the program have long since disappeared, but that lack of  information means a writer can fill in the blanks and create a narrative around a subject that, in one way or another, continues to haunt the culture.

Which is exactly what Scott O'Connor does, extrapolating on how the MKULTRA program affected subjects as well as administrators, and anyone connected to either. In the end, this is a novel about identity, and how, with a bit of work, it can  be manipulated. It opens with Henry March driving cross country, from CIA headquarters to Oakland, with his wife, daughter and autistic son. In San Francisco, March and a  group of fellow agents hire prostitutes to entice men back to the apartments they have rented, where they drug their subjects and work on altering their personalities. It's brutal and time-consuming work. Unable to take the strain, Henry, a good example of Arendt's banality of evil,  eventually finds his own identity unravelling. Consequently, he  disappears from the program and his family, as well as from much of the novel. But even as a ghostly presence, Henry continues to affect others, including his wife, daughter, son, subjects such as a Philip K. Dick-like science fiction writer whose pulp novels contain descriptions of the program, and fellow undercover workers, the most prominent of which is an drug-addled CIA agent who attempts to infiltrate a group of political bank robbers.  All seem to be, on the one hand, struggling to find themselves, and, on the other, wondering about the man known as Henry March, wherever he might be. An interesting and, in its own way, important novel, Half World not only depicts the dark side of the drug culture- a kind of  Manchurian Candidate at street level- but works as a metaphor for the culture as whole, torn apart then as now by war, drugs and an economically divided society. I only wish there were more novels like this, i.e., not only about something, but with something to say.

Posted by Woody Haut at 4:41 PM No comments: