A Colossal Wreck- A Road Trip Through Political Scandal, Corruption and American Culture by Alexander Cockburn 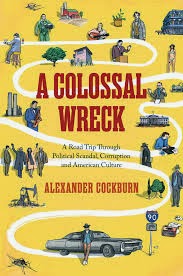 It's a romantic image: flitting across America in a vintage gas guzzler, sticking to the back roads, taking the pulse of the nation, jotting it all down, sending off dispatches, in an attempt to stir  things up as much as possible. Alexander Cockburn's A Colossal Wreck is not so much Kerouac's On the Road or Dan J. Marlowe's Name of the Game Is Death as some mutant artifact created by crossing by H.L. Mencken and Edward Abbey, with a soupçon of Hunter Thompson, not to mention  the author's father- once the scourge of everything provincial and conservative in Britain- Claude Cockburn. In other words, Alexander Cockburn was, until his untimely demise, part of a long line of  journalists unashamedly radical, eccentric, opinionated and invariably entertaining.

I began reading Cockburn in the 1980s, when he was excoriating Reagan and his minion. His articles were a necessary tonic for that toxic decade. Cockburn went on to flay subsequent administrations with contributions to  periodicals ranging from the Nation, Esquire, Harpers, Village Voice, to his local Anderson Valley Advertiser,  his on-line Counterpunch, and, surprisingly, the "paleocon" Chronicles Magazine. The latter a reminder that Cockburn, ever the iconoclast, could be as critical of liberals and  progressives, including, heaven forbid, socialist senator, and progressive favourite, Bernie Sanders, as he was of the right.

This, Cockburn's final book, could be his best. It's nothing more than a journal, which begins in 1995 at the end of Clinton's first term, and ends in the summer of 2012, four months before  Obama's re-election. The individual entries are, for the most part, under two pages, with some notable exceptions, such as  his excoriation of Rupert Murdoch; a play in which fellow Brit, and militant atheist/war-apologist Christopher Hitchens meets Henry Kissinger in heaven; an entry on his father, regarding Oxford types, spies and the Spanish Civil War.  Describing himself as "Marx-ish," AC's  renegade leftist perspective can also be painfully prescient, whether on the financial crisis, or the entry, dated  9-12-01, in which he notes the imminent threat to civil liberties posed by the previous day's attack. While his initial Hitchens slap-down comes some years before the latter became the neo-cons' poster-boy for cross-perspective war-mongering, when, during the those crashingly tedious dog-days of Monica-gate, he snitched, just like his idol George Orwell had done, on his friend, the Clinton insider Sidney Blumenthal. Moreover,  Cockburn, unlike many, had  Obama clocked from the beginning, describing him, after his famous "race speech," as "a master at drowning the floundering swimmer he purports to rescue, while earning credit for extending a manly hand in human solidarity...reminiscent of Alexander Pope's eighteenth-century lines about Joseph Addison: Damn with faint praise, assent with civil leer/ And without sneering, teach the rest to sneer."

If I have any criticism of Cockburn, it's his occasional reliance on  gossip. It's the pundit's  equivalent of an "unnamed source." Like the guy  who schleps Hillary around telling him that he overheard  her saying something nasty about a homeless person. On the other hand, Cockburn makes a cogent case for gossip- in this case, "outing"- early on in the book: "Yet even in the counterculture, or at the level of the off-beat and unofficial, gossip always has the twin function of being liberating- letting the sunlight in- and repressive, in the sense of exposing the personal and the private, naming names and hurting people. Gossip represents visible fault lines at the social surface, reflecting subterranean, gradual shifts in our social attitudes. Although the liberating and repressive functions are both at work, given the structure of media ownership and control, the repressive function is usually dominant."

Ever the contrarian, Cockburn, with his elegant prose and perspective, can never can be accused of reaching for the lowest common denominator. Particularly enjoyable are entries on contemporary buzz-words on their way to the tumbril (a cart used during the French revolution to haul away the dead), overseen by the infamous, if dubious, Fouquier-Tinville. Words and phrases such as  "iconic", "the new normal", "a tsunami of..." Coming across as a politicised version of Private Eye's "Colemanballs," Cockburn prefaces these entries with a reference to Marcuse regarding the Pentagon giving up on verbs because they believe them to be "unreliable and probably subversive. They talked too much, gave too much away," substituting "clotted groups of nouns" in their place. Though maybe Cockburn sometimes strains just a little too hard to sound like a modern version of Wyndham Lewis's  Enemy, someone unafraid of offending, unable to not  tell the truth as he saw it, for whom speaking truth to power might be applied if that term had any meaning and wasn't  destined for aforementioned tumbril. Or, for that matter, if author had ever displayed any interest in that particular process.  Cockburn's final entry is dated  July 13th, 2012, about why, even though it would be more equitable, a return to the draft is not about to happen in the U.S.. Cockburn would die  eight days later in a German hospital. Without so much as a mumbling word about his illness.

Posted by Woody Haut at 4:13 PM No comments: