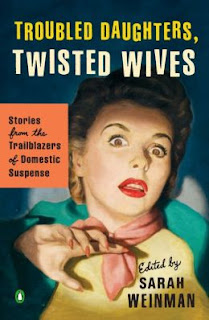 For me, one of the cornerstones of noir, and perhaps its most subversive element, has always been its investigation and critique of the nuclear family and middle-class suburban life. What goes on behind those closed doors and lace curtains is, as far as I'm concerned,  far scarier than any number of serial killers or psychopathic cops. Just think of McGivern's The Big Heat, Dorothy B. Hughes'  In a Lonely Place and  Leigh Brackett's A Tiger Amongt Us. Given their emphasis on domestic angst, it's no coincidence that film noir during its classic period was referred to as crime melodrama, and sometimes categorised as films for women. Naturally, a number of those films were based on stories written by women; after all, who better to describe the politics and paranoia of domestic life.

Some of those authors are included in Weinman's excellent and welcome anthology, while others  in Troubled Daughters, Twisted Wives simply wrote novels and contributed stories to the likes of Ellery Queen between the 1940s and the 1980s. Weinman seeks to revive this cross-section of banished noiristas. Her anthology is interesting not only because it highlights such "lost" writing, but, as Weinman points out, these writers dissected society from a female perspective more often than not with a  female protagonist, making them  precursors to  the likes of  Gillian Flynn, Megan Abbott, Attica Lock, and Sarah Gran, whose work is amongst the most interesting crime fiction being produced today.  Of course, that might be down to the fact that  a certain type of  male crime writing, burdened by the cult of masculinity, the myth of the lone hero and its lopsided libertarian ethos, has arrived at a dead end. Likewise, the Chandleresque private eye. These days it's  become harder than ever to make those  tropes work. That's not to say that there aren't exceptions to that rule. But, as I suggested years ago in Neon Noir, a great deal of the crime fiction, particularly during the 1980s, could be said to have been a male response to feminism as well as an extension of Vietnam war literature, both of which carried a limited sell-by date. Clearly times have changed.

What one gets treated to in Troubled Daughters... are not only stories by the better known- Patricia Highsmith, Dorothy B. Hughes, Shirley Jackson and Margaret Millar  (her husband, Ross Macdonald, also wrote about domestic situations, but from a more distant perspective)- but by the less well known but equally formidable Helen Nielsen, Vera Caspary, Charlotte Armstrong and Elizabeth Sanxay Holding (a Chandler favourite). However, for me, the great joy was discovering the likes of Nedra Tyre, Barbara Callahan, Joyce Harrington, and Ceila Fremlin. Many of these writers, regardless of the quality or importance of their work, have been ignored by critics, Anthony Boucher not withstanding. But then the quality of criticism when it comes to crime and noir fiction has always been somewhat strained. As for the stories themselves, they are uniformly excellent, dealing not only with the paranoia of suburban life, but poverty, escape, identity, trauma and loss. And, of course, there's no shortage of crimes. My one quibble would be where are the likes of Mary Holland, Craig Rice, Delores Hitchens and Leigh Brackett? But, who knows, maybe there's a second volume  in the pipeline. I hope so, this even though I generally abhor anthologies. In the meantime, we owe Sarah a debt for "rediscovering" these writers and putting them in the context of their, and our, time and place.

Posted by Woody Haut at 2:19 PM No comments: