The Maid's Version by Daniel Woodrell 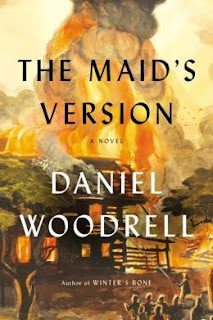 Daniel Woodrell, about whom I've written several times (for example, here and here), never ceases to surprise me. My first surprise came when, after his series of excellent Bayou crime novels, he produced, seemingly from nowhere, the incredible Civil War novel, Woe to Live On. Then he switched gears again, with  modern-day Ozark narratives like Tomato Red, Give Us a Kiss, and The Death of Sweet Mister, which seemed to reach a fruition in  the evocative Winter's Bone.

But, for me, The Maid's Version is Woodrell most surprising turn to date. It too is set in the Ozarks, and is every bit as noir-infested as his previous books. For me, the real surprise here is the writing itself, which at times seems to approach the lyricism of Faulkner. Then there's the book's scope, which, like a noir version of Anderson's Winesburg, Ohio, takes in an entire community. With its subtle shifts in voice and time, Woodrell is able to depict the rifts of a small entire town torn apart by a dance-hall fire that kills some forty people.

"The explosion happened within a shout and surely those in the house must have heard everything on that bright evening, the couples arriving, strolling arm in arm or as foursomes, the excited laughter, the cooed words, the stolen kisses..., all carrying loudly on that blossom-scented night between the wars, here in the town this was then of lulled hearts and distracted spirits."

And how's this for timeless writing:

"Trains have haunted the nights in West Table since 1883 and disrupt sleep and taunt those awakened. The trains beating pass toward the fabled beyond, the sound of each wheel-thump singing. You're going nowhere, you're going nowhere, and these wheels are, they are, they are going far from where you lie listening in your smallness and will still lie small at dawn after they are gone from hearing, rolling on, singing along twin rails over the next hill and down and up over the next onward to those milk-and-honey environs where motion pictures happen for real and history is made and large dashing lives you won't lead or even witness are lived."

Essentially, The Maid's Version is a simple story. It's narrator, situated in the present, sets out to discover who might have been  responsible for the fire.  In doing so, he uncovers the usual, as well as some unusual, suspects- big city mobsters,  gypsies, a hellfire preacher, or someone else altogether.  As a by-product of his investigation he also discovers a great deal about the community in general and his family in particular. With the main action taking place in the midst of the Depression, this is a town divided between those  too important to fail, and those so unimportant that they must struggle not to fail, which are represented by two families- Alma's and the family for whom  she initially works. And it's Alma, the maid and the narrator's grandmother, on whom the story rests. As though Woodrell is saying that such workers are, in the end, the keepers of the culture, burdened with essential information, both useful and inflammatory. Yet Alma has to be discrete, something that's not easy or, given her circumstances and her more reckless sister, possible without suffering the consequences. Interestingly, I can't recall any mention  that Alma is anything but a poor farm girl, leaving readers to question their own assumptions regarding race, class and domestic servitude.

Woodrell's novel might have the reach of an epic, but it has the compression of a short story. Of course, it's self-conscious, necessarily so; after all, the narrative voice is that of a young man fighting to find a way to tell the story. And by the time of its final telling, he has become relatively well-versed in the ways of the world, aware of what has been lost, whether through war, fire, technology or historical amnesia. All of which makes The Maid's Version light years from those early Bayou novels and a major step beyond the likes of  Tomato Red and even Winter's Bone. At the same time, The Maid's Version manages to retain the humanity of the latter and the toughness of the former. The Maid's Version is not only unlike anything Woodrell has previously written, it's unlike anything you are likely to read this year.