Written by Jay Gertzman, author of Bootleggers and Smuthounds- 1920-40: The Trade in Erotica, as well as an excellent essay on David Goodis, Infamous Modernist is the story of poet, novelist, pamphleteer, magazine editor and outlaw publisher Samuel Roth. But it's also the story of an era that stretches back to the early days of the 20th century, when the lower East Side of New York was a haven for Jewish immigrants- poets, Yiddish actors, trade unionists, journalists, with more than its fare share of anarchists, socialists and Marxists. Over the years that world has been documented by such disparate writers as Irving Howe, Luc Sante and Ed Sanders. But, to my knowledge, Roth has so far escaped scrutiny.

From Gertzman's handsome but somewhat pricey volume we learn that the Galician-born Roth was more than a marginal figure. Emigrating to New York at the end of the nineteenth century, Roth was heralded as a promising young poet, and, in 1920, opened a bookstore that would become a meeting place for writers. In the ensuing years, Roth would be instrumental in fighting the existing censorship laws, paving the way for books like Burrough's Naked Lunch, Nabokov's Lolita and Ginsberg's Howl. Of course, this came at a cost. For his efforts, Roth would spend some nine years in prison, first in 1928, for distributing obscene material through interstate commerce. His final last stretch- over three years- began in 1958. A self-publicist, provocateur and literary hustler, he published two volumes of particular notoriety: Nietzsche's "memoir," My Sister and I, about the philosopher's incestuous relationship with his sibling, which might have been written by the philosopher, Roth, or someone else altogether, if not any combination thereof. The other volume was penned by Roth himself, the inflammatory Jews Must Live: : An Account of the Persecution of the World By Israel on all the Frontiers of Civilization, which would be taken up by the Nazis and still referred to in white-supremacist circles ("There is not single instance when the Jews have not deserved the bitter fruit of the fury of their persecutors...We come to the nations pretending to escape persecution, we are the most deadly persecutors in all the wretched annals of man."). Roth, in the absence of international copyright agreements, also produced unauthorised versions of books like Ulysses, Lady Chatterley's Lover and Harris's My Life and Loves. In doing so, he not only made such classics available, but inadvertently addressed issues regarding the ownership of literature and book-as-commodity. As well as being found guilty of distributing pornography through the US mail (obscene material falling outside copyright legislation), Roth  incurred the wrath of Walter Winchell (probably in response to Roth publishing The Secret Life of Walter Winchell) and New York D.A. Frank Hogan,  while a Senate committee would condemn him for inciting juvenile delinquency by targeting adolescents for the erotica.

Scrupulously researched, including valuable information from Roth's daughter Adelaide Kugel (often entertaining, as in the story of  the woman walks into her father's bookstore and says in a Yiddish accent, "I want sex." Sam replies, you've come to the right place. All these books are about sex."  To which the woman answers, "Not books. Sex. Sex Fifth Avenue."), Gertzman makes an excellent case for giving Roth his due. With his numerous publishing house and book clubs, Roth epitomised the motto "publish and be damned." With the proliferation of porn on the internet and the sexualization of the culture, Roth's story, however tragic- his last prison sentence in Lewisburg was served alongside fellow inmate Wilhelm Reich- might seem quaint. However, through the 1950s, such activity was deemed highly subversive, even part of the communist arsenal. Which is ironic considering Roth's anti-communism and his occasional willingness to work for the state. In Gertzman's hands, Roth's story, depicting a world long gone, continues to resonate, even cited as  "a wall-eyed loser" in Michael Chabon's prize-winning Amazing Adventures of Kavalier & Clay. 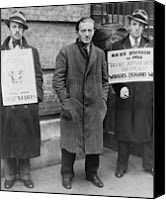 On a personal note, my father used to tell me about hearing Roth's cohort, the notorious Maxwell Bodenheim, read his poetry. Probably traveling down from Harlem to Roth's bookstore, though it could be that he heard Bodenheim in Chicago where he worked alongside Bodenheim's friend Ben Hecht. In any case,  Roth would publish Bodenheim's My Life and Loves in Greenwich Village, though it turns out Bodenheim was not the sole author of that volume. But, then, that  was par for Roth's course. Likewise, it was common  for Roth to insert himself into such texts. And sure enough, while perusing my Belmont edition of My Life and Loves..., I noticed the penultimate chapter  entitled  "public bohemian number one," which concerns none other than Samuel Roth. While the final chapter, on Bodenheim's last days, was written by S.R., presumably Samuel Roth.

As for Roth's noir credentials, what could possibly be more noir  than the sleazy world of underground publishing and book-selling, even more so when pursuing free speech, whether in the guise of erotica, porn life or high-class literati like Celine, Henry Miller and Joyce. And to add to his noir credentials, Roth distributed remaindered copies of Gresham's Nightmare Alley in 1947, a book cited in the case, Roth vs Goldman. Moreover, among Roth's ghost-writer of erotica, one of the most adept was his daughter-in-law Peggy Roth who, as Margaret Gruen, and before she was blacklisted, received a story credit for Ida Lupino's 1948 film noir Road House, and contributed to the screenplay for Michael Curtiz's 1945 Mildred Pierce. This is a book overflowing with such information. Not  only a literary con-man, extremist and free-speech advocate, Roth was probably, to usurp James Brown's title, the hardest working man in publishing.
Posted by Woody Haut at 2:11 PM 2 comments: 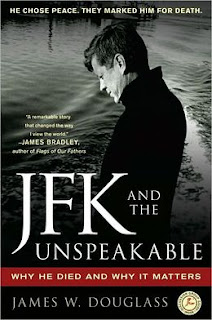 It seems the truth, if this is the truth- and I've no reason to think it's not- about JFK's assassination goes far beyond the noir musings of novelists like Ellroy and DeLillo.  In fact, Douglass' book is probably as noir as true crime gets. I have to admit, I've  never been one to declaim JFK as a man of peace. Nor did I  believe he was on the verge of withdrawing from Vietnam. At the same time, I've always considered the assassination a watershed in American culture. It was also an essential element in  the creation of neo-noir fiction that appeared during and in the aftermath of the Vietnam war (which I discuss in my books Pulp Culture and Neon Noir). At the very least it  helped promote the nation's obsession with conspiracies regarding the government, and the national security state.  But Douglass' book prompted me, albeit some six years after its publication, to reassess JFK's assassination and the circumstances surrounding it.

Even though I'd never considered Oswald the lone shooter,  but most likely part of a right-wing conspiracy involving the CIA and organised crime, I had no idea the extent of that conspiracy and subsequent cover-up, the reasons behind it, or JFK's evolving post-missile crisis politics. This even though I'd once been an avid reader of JFK assassination books by the likes of  Mark Lane and Jim Garrison. But the scrupulously documented JFK and the Unspeakable brings all that past research together, and much more,   including further information regarding the national security state's attempt to maintain the cold war, invade Cuba, launch a preemptive strike against the USSR and prolong the war  in Vietnam. Against that, Douglass maintains that JFK had decided to dismantle the CIA and, with his test ban treaty, work with Khrushchev to end the cold war. That being the case, Douglass, a Catholic theologian and peace activist, insists that Kennedy was a threat to the military industrial complex- which Eisenhower had warned about only a couple years earlier- the CIA- about which Truman, even though he created it, had reservations- and the continuation of the cold war. And so had to be taken out of the picture.

This was a conspiracy both complex and paper-thin instigated, according to Douglass, by the likes of CIA head Allen Dulles, veteran spook-poet James Jesus Angleton, and perhaps Henry Cabot Lodge, who came from a family bitterly opposed to the Kennedy's. Unfortunately,  JFK made the mistake of appointing Lodge ambassador to Vietnam, only for Lodge to subvert every attempt JFK made to wind-down US presence in the region. Though  LBJ  refused to scapegoat the USSR for the assassination, which could have turned the cold war into a hot war,  he did little  to confront the military-industrial complex regarding the assassination, their cold war perspective, or the country's presence in southeast Asia. No hagiography, Douglass doesn't gloss over JFK's faults, but conducts a thorough investigation of the era and  events culminating in the most famous cover-up in modern history which Douglass, quoting Thomas Merton, categorises as the Unspeakable-  "the void that contradicts everything that is spoken even before the words are said.; the void that gets into the language of public and official declarations at the very moment when they are pronounced, and makes them ring dead with the hollowness of the abyss." If you're going to read one book on JFK's assassination, or, for that matter, one true crime book, this is the one you should go for.

- I was surprised at just  how close the US was to a military coup during  the Cuban missile crisis. However, it wouldn't  be an overstatement to say that JFK's assassination was, in fact, a military coup. Unfortunately,  LBJ never sought to question the national security state, the military industrial complex, or US presence in Vietnam. But, as Douglass points out, though LBJ belonged to a different party, he had always had a good working relationship with Lodge.

- In the less than three years JFK  had to deal with  the Bay of Pigs, the missile crisis, the Berlin Wall, Laos, Vietnam, and Indonesia, any of which, if mishandled, could easily have resulted in a nuclear war.

- While living in  Mexico City in 1965, I was told by another American that Oswald had been seen at the Russian embassy in that city.  If the likes of young Americans living in Mexico such as myself  knew about his presence in the city, you can bet that CIA wanted such information disseminated, and so add to the evidence that  Oswald had a pretext- his hatred of America- to kill the president. Of course, we now know there was more than one Oswald, that the real Oswald most likely never visited Mexico City.

- The post-assassination fear  that the CIA controlled  the government has been represented in various  films (Manchurian Candidate, Parallax View, etc.), and any number of spy and crime novels. In many ways it's trope that has outlived its usefulness.  Which doesn't mean it wasn't true, at least until the Church hearings, only that most  accepted it as fact. But today's nemesis is Wall Street and global capitalism, linked as they are to the military-industrial complex, which has grown out of proportion thanks to America's particular brand of military Keynesianism. When it comes to those in control, it's hardly the CIA, but the oligarchs and plutocrats, while their War on Terror has curtailed the rights of those at home and abroad, turning the CIA into a surveillance and killing machine, sub-contracting more than ever. A scenario that goes far beyond what the national security state sought during JFK's time.

Posted by Woody Haut at 5:04 PM No comments: