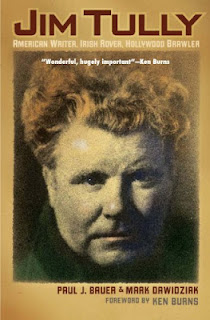 "Across a chasm of years the outlines of even the most vivid of life are blurred. But impressions gained as a youthful hobo are likely to endure until the rover has wandered the last road home. I have often wished that Cervantes had written a tale of his wanderings on the sunlit roads of Spain, or that Goldsmith had written in matchless English of the days when he played a flute for bread, or that blind Homer had left a few pages about his experiences while tramping the roads of Greece. The old minstrel might even have immortalized a Greek slave who fed him."
(Jim Tully, Beggars of Life)

I've been collecting books by circus worker, laborer, road-kid,  boxer and writer, Jim Tully for the last twenty years, so by now I have a pretty good collection. But I dare not open them too often for fear of damaging them. So these  reprints- seeing the light of day for more than half a century- are particularly welcome. I think I must have first heard of Tully sometime in the early 1970s, most likely in Kenneth Allsop's forgotten classic text of the open road, Hard Travellin.' I think that must have been where I first heard of Tom Kromer as well. Two writers I immediately knew I had to find out about. While someday a biography of Kromer might appear, there is now  an excellent and long-awaited biography of Tully, written by Paul J. Bauer and Mark Dawidzirk. The thoroughly researched Jim Tully- American Writer, Irish Rover, Hollywood Brawler, published in 2011 by Kent State University,  portrays Tully warts and all, and should be read by anyone interested in hardboiled fiction, proletariat writing, or books about the open road.

The Tully reprints all come with excellent introductions: Shanty Irish  by director/novelist John Sayles; The Bruiser by boxing expert and cultural critic Gerald Early; Circus Parade by graphic novelist writer Harvey Pekar; and Beggars of Life by Bauer and Dawidziak. While Bauer and Dawidziak's  biography sports an  intro by historian Ken Burns. The latter makes the point that  Tully is a quintessential American writer, comparing him favorably to Mark Twain. Born in 1891 in Cleveland, Ohio,  Tully, whose forebearers came from Donegal, Ireland, became friends with  Charlie Chaplin, for whom he worked as publicist, but about whom he was not beyond criticising in his writing.  He was also a friend of W.C. Fields, Langston Hughes, Stanley Ketchel, Jack Dempsey, who, regarding The Bruiser, "If I still had the punch in the ring that Jim Tully packs in The Bruiser, I'd still be the heavyweight champion of the world today," and H.L. Mencken, who also promoted Tully as a writer. No doubt about it, The Bruiser is one of the best boxing "novels" ever written; Circus Parade, one of the finest portrayals of what occurs beyond the big top; Beggars of Life arguably the best depiction of life on the road; and Shanty Irish, an incisive, often humorous portrayal of working class immigrant life. Influenced by a range of writers, from Jack London to the Russians, Tully, in his time was ranked alongside Sinclair Lewis, Eugene O'Neil and Dreiser. It's claimed that, before becoming an actor, Robert Mitchum went on the road after reading Tully's Beggars of Life.

Nathan considered  Tully was the original hard-boiled writer, preceding Hammett, Chandler or any of the other Black Mask writers. I suppose one could make a  case for this, though it remains arguable. No matter, because the autodidact Tully, whether writing about poor Irish, boxers, movie people, hoboes, or circus folk, always had an eye on the  lower depths, a literary precursor to Woody Guthrie, whose book Bound For Glory, he admired.

It was hanging around hobo jungles and libraries where he could get warm and not be harassed by the police, that Tully began to read. Encouraged by his sister to write, he was, according to Charles Laughton, the most intelligent man in Hollywood. Always a hard drinker, Tully saw his book- here, as Bauer and Dawidziak point out, it's  difficult to call any of his books novels, more like fictionalized autobiography- Beggars of Life made into film starring Wallace Beery and Louis Brooks, who apparently found the short, red-haired, odd-looking Tully somewhat repulsive. His Laughter in Hell was filmed in 1933, starring Pat O'Brien. He also worked uncredited on the screenplays for 1935 The Raven starring Bela Lugosi and Boris Karlof, and appeared in the 1930 Way For a Sailor starring John Gilbert and Wallace Beery, not long after  Tully decked Gilbert in the Brown Derby after writing a profile of the heartthrob. Tully died in Hollywood in 1947, a literary star already in decline. Soon he would disappear from literary history.

Anyone reading these four Tully titles will find that, after all these years, they hold up well. If you haven't read Tully, you might start with the biography or, if you want to get straight into his work, try Beggars of Life.  These are all important books that anyone interested in early noir/hardboiled fiction, hobo and low-life literature should read.

For my money, Gil Brewer was one of the best pulpsters around.  Like his novels  13 French Street and The Red Scarf, Brewer's short stories, published from the early 1950s through the 1970s, still have the power to shock. And they might even be better than his novels. They are certainly wilder and more intense. Though some might complain about their occasional similarity,  Brewer could always find a new way to twist in the knife. Some of his stories, like Moonshine, even come close to a kind of pulp prose-poetry. Brutal, concise, and often misogynistic, everything in the collection seems to have been published during the 1950s, and usually  set in Florida, where Brewer moved once he'd been discharged from  the army. It should be pointed that Brewer's career continued right through the 1970s. Nevertheless, what's collected in Redheads Die Quickly is  Brewer at the top of his game. Moreover, they provide an  insight into the type of fiction published at the time in magazines like Manhunt, Detective Tales, Detective Fiction, Hunted Detective Story, Justice, etc.. The days of those magazines and stories are over, as is the role of jobbing writer. Gilbert John Brewer was born on 20 November 1922 in Canandaigua, New York, and died  9 January 1983, yet another writer paid by the word, and whose word-count never exceeded the parameters of his narrative. This collection, which comes with an excellent introduction and a thorough bibliography of Brewer's short fiction, both by editor David Rachels, should be read by anyone interested in the last days of the pulp era, as well as by those seeking to go beyond the usual suspects like Hammett and Chandler, to the real workers of the genre, who, struggling to make ends meet,  produced some of the best writing of its kind. While I can't agree with Rachels' assessment of Brewer as a descendant of literary naturalist Frank Norris, particularly the latter's McTeague,  I do agree with his assessment that Brewer's protagonists are ordinary people "whose circumstances cause them to break the law." Which, along with a straight-forward prose , is what makes his writing so powerful. 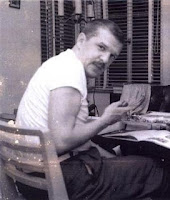 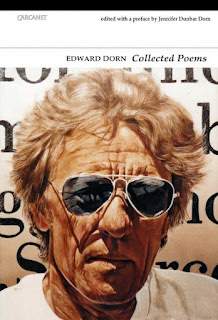 Finally we have in one volume all of Ed Dorn's poetry, including a large helping of uncollected work and assorted ephemera (anything but ephemeral).  And what a remarkable collection it is. From those exquisite early lyric poems and political narratives like The Land Below, Idaho Out and West of Moab found in The Newly Fallen (1961), Hands Up (1964), Geography (1965) and North Atlantic Turbine (1967), to Dorn's immersion into the possibilities of the narrative that would eventually become the metaphysical comedy of the West, Gunslinger (1968-75). With  "I" as a character/narrator disposed of, Dorn would go on to the slimmed down, but no less political, homage to Native Americans, Recollections of Gran Apacheria (1974). Having seemingly exhausted the parameters of the narrative, Dorn, on some level, must have had to reassess what his poetry could accomplish, which led to a reduction in scope, while doubling-down on political intent. This resulted in those short, sharp lines of attack that comprise  the epigrammatic poems in collections like  Hello, La Jolla (1980) and Abhorrences (1990). Of course, Dorn had always been political, e.g., The Biggest Killing, On The Debt My Mother Owed at Sears Roebuck, up to prescient North Atlantic Turbine, but that handful of books-  accessible, very funny ("only laughter can blow it to rags") and deadly accurate- comprise a venomous attacks on the Reagan-Bush era, and no doubt caused offense to some in the poetry establishment. Never one to stand still, it wouldn't be long before Dorn had once again repositioned himself,  with a series of dyspeptic narratives in the 1990s, which were further critiques of the culture, beginning with Westward Haut (1986-99),  and his investigation of the Cathar world,  Languedoc Variorium (1992-99). And lastly,  the excruciatingly beautiful, and perhaps most political of all,  Chemo Sabe (2001), in which he follows his own cancer treatment and catalogues the final days of his life. And that's just a broad outline of what's in this book. We also get such items as the hilarious Bean News (1972), which could be seen as the precursor to Ed and Jennifer Dorn's Rolling Stock, the lyrical Manchester Square (1975), Captain Jack's Chaps (1983), etc. A number of items included here  have, up to now, been hard to come by, which is another reason to welcome this volume which weighs in at close to a thousand pages.  Though I can't help wishing  the long-unavailable Bean News had been reproduced in such a way that one could read it without resorting to a magnifying glass.

With  informative essays from editor Jennifer Dunbar Dorn, and long-time friends and fellow-poets Amiri Baraka and Jeremy Prynne,  this is  a book that will keep anyone busy for a lifetime.  For me, Dorn was amongst the finest and fiercest practitioners of verse, notable for  his contrary politics (deploying Wyndham Lewis' notion of The Enemy as something of a  model), his willingness and ability to say  the unsayable, and attitude to poetry. Though he's long been associated with Black Mountain, specifically Charles Olson, Dorn, in the end, belonged to no school and no movement, but  a force unto himself.  Though he held up poetry as the noblest of pursuits, he often found those pursuing it came up short, whether because of their view of the world or their view of themselves. At the same time, he was never one to give poetry a status beyond what it deserved, maybe no more so than an array of other pursuits gained by brain or  by hand. With an ability to map the culture, and, at the same time, to laugh at it, it's unfortunate  he wasn't around to lay into the second Bush years, or, for that matter, critique the  economic scams of the early 21st century.  As this collection so ably illustrates, Dorn was as fierce and honest (Baraka: he wd rather / Make you his enemy / Than lie) a poet-critic  as you're likely to come across. If you only buy one book of poems this decade, this is the one to get.
Posted by Woody Haut at 3:42 PM 2 comments: