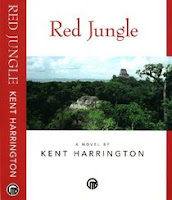 It's only taken me  eight years to get around to reading Red Jungle by Kent Harrington, but it was  more than worth the wait. In fact, it was probably the best noir novels I've read since Winslow's Power of the Dog. Well-written and intricately plotted, Red Jungle is set in Guatemala post-9/11, and reminiscent of writers like Robert Stone and Graham Greene. It makes me wonder why it hasn't been picked up by a major publisher, or, for that matter, why no one has tried to adapt it for the screen.  So hooked into present day Latin American politics is it that I kept checking the newspapers to make sure this wasn't also happening in the real world. After all, there was Chavez winning the election against an American-backed free-market moderate. But, no, so far nothing about a coup, revolution or civil war in Guatemala. Then I came across a recent article about a military and police massacre in Totonicapán, Guatemala. On October 4, 2012, Maya K’iche’ communities carried out a peaceful protest organized by the Alcaldía Indígena, the indigenous authority of the 48 Cantones of Totonicapán, in regions of Alaska, Xecanchavox and Cuatro Caminos in the highlands in Guatemala. The protesters demanding  the state work to scale back the most recent hikes in electric energy costs, reform education, and  reverse the trend toward militarization of civil society.During the demonstration the military and civil police shot indiscriminately at the demonstrators, resulting in eight deaths and thirty-five wounded. It could have come right from the pages of Red Jungle, which is to say Red Jungle comes right out of  the history of Guatemala.

The novel revolves around  Russell Cruz-Pearce, born of a wealthy all-American father and a wealthy upper class Guatemalan mother. He's attended military school and university in the US where he studied economics. Pearce is torn between exploiting Guatemalan culture for his own profit and working for the anti-military forces.  He believes his mother has been killed by the communists, which has for many years  affected his life. Working as a journalist in Guatemala, he buys a coffee plantation at a time when coffee is at rock-bottom levels, and the country, thanks to US policies,  is on the point of disintegration. A German archaeologist has convinced Russell that a Mayan Red Jaguar, which might not exist, can be found on his newly bought property. So, after Russell purchases the property with money he doesn't have, the two of them look for Red Jaguar. Along the way Russell falls in love with the wife of the murderous presidential candidate.

Harrington portrays a divided culture, laid low by neo-liberal economics and the effects of neo-colonialism. A culture in which, at the top, practically everyone knows each other, and, some, even though they are in opposite camps politically, are related to each other. Despite their gentlemanly ways, their politics is ruthless. Political assassination and plotting are commonplace. So Guatemala provides the perfect setting for a book about the effect of a particular murder on one person's life, and how that, in turn, affects those close to him.  I recently read that it resembles the story of Harrington's own family. That may well be, but, more  importantly, it's the story of Latin American politics and history. Red Jungle successfully tackles important themes like under-development, neo-liberal economic policies, and the influence of the US on Latin American foreign policy. For me, Harrington's Dia de Los Muertos, published in 1997, and set in Mexico, was excellent, but Red Jungle is even better.
Posted by Woody Haut at 4:06 PM No comments: