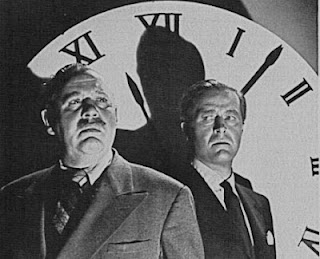 An adjective, clinging like a dead insect in an abandoned
Hollywood swimming pool. And so 1950s. Today big would
have to be biggest. Leading to various ambiguities:
The Biggest Sleep: would that be the most boring movie
ever made, or a pill to get you through the night?
The Biggest Clock, a travelogue, or a typo in a porno ad?
The Biggest Combo, a burger found on the Strip or
the world’s largest aggregation of musicians. Back then,
big mean something, from war to war, anxiety to
consumerism. Framed by cigar-smoking expressionist
emigrés, their motto: I shot therefore I was. Assuring us
that time leads to paranoia, perversion to crime, and
sleep, not sex, constitutes the little death. That coffee
thrown in Gloria’s face doesn’t become real until she
sees herself in a mirror. A woman with a gun more
dangerous than a scar or an explosion. It’s always night
in high-contrast Los Angeles. Except when it isn’t.
Back in the land of the small, the average man is king,
and everything was big: Clock, Combo, Heat, Sleep,
Steal, Night, Knife. And still far too nuanced for color.

Posted by Woody Haut at 9:52 AM No comments: