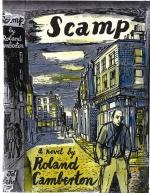 As well as an excellent novel, Scamp is a valuable piece of London literary and social history that, in an age of multi-culturalism, instant publishing and networking, has probably been lost forever. Camberton, real name Henry Cohen, was born in Manchester and raised  in pre-war, working class Hackney. What first hits you about this book is the cover  by the renowned artist John Minton, reproduced from the original Lehmann edition in 1950. But it's not only the packaging but the contents of the novel that is going to impress any interested reader. Standing the test of time, Scamp  focuses on Ivan Ginsberg, a young would-be author and editor who flits between  Bloomsbury and the back streets of Soho and Fitzrovia, trying to put together a literary magazine that bears the same title as the novel itself.  To get the magazine off the ground, he has to find the money to finance it, a printer to publish it, and contributors to write for it. To do this, he plays off one against the other two, telling each that the other two exist. It's a typical literary hustle in a world where the printed word meant something. Living in a filthy rented room in Bloomsbury notable for its  congealed fat in the frying pan and dirty dishes in the bath-tub, Ivan  perambulates the streets of London, from a Charlotte Street pub where he mixes with the local bohemians to cafes in Fleet Street where he breakfasts with a variety of newspaper hacks and printers. A flanuer novel about literary hustling, Camberton writes evocatively about the night life and those inhabiting it-  crooks, homosexuals, prostitutes, bookies, sex seekers and hardboiled tough-guys- as well as the likes of the well-endowed Mrs Chabbers who would like to take Ivan- her bit of rough trade- to the Riviera, or the millionaire book collector and slum landlord who dresses like a tramp. This edition published by Five Leaves in their New London series comes with an informative introduction by Iain Sinclair- probably the only place you are going to be able to read about what little is known of Camberton's life. On its own, Scamp  ranks up there with Simon Blumenfeld's Jew Boy, John Summerfield's May Day, and Alexander Baron's Lowlife. It should also be noted that New London Editions publish two excellent Baron novels: Rosie Hogarth and King Dido, as well as Camberton's Rain on the Pavements.

The latter  comes with another evocative John Minton cover. Set in Hackney, and originally published in 1951, Rain On the Pavements is clearly more autobiographical than Scamp. Consisting of interconnected short stories about growing up in an orthodox Jewish family, it begins with the protagonist, David, as a six year old travelling on a London tram with his cousin,  and ends with David and his friends watching some older boys fight Mosley's fascists in the battle of Cable Street. Both Camberton novels are excellent depicitons of working class Jewish life in pre-war London and shouldn't be missed.

These Dreams of You by Steve Erickson 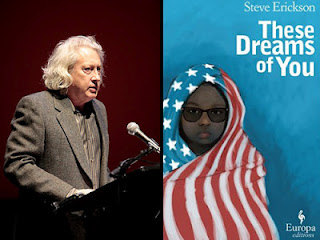 There are few writers I'd rather read than Steve Erickson, but when I began These Dreams of You, I wasn't sure the author would be able to carry this one off, so new is the subject, and so filled with  overtones that have yet to be fully articulated.

But I shouldn't have worried.

Certainly too early is better than too late or never at all? However timely, These Dreams of You might even be somewhat late when it comes to present day politics. But neither too early or too late has much bearing on the novel's urgency. If anything,  this is a more serious and complex book than Erickson's previous outing, the excellent and transgressive Zeroville.  In fact, this might be Erickson's most important book, as firmly in the cultural pocket as Leap Year, and ranking up there not only with Zeroville but his monumental Days Between Stations.

It's also a deeply a deeply troubling book. Which is as it should be.

Because These Dreams of You- the title of course comes from the Van Morrison song- reads like a dream-photograph of contemporary America, focusing as it does on the culture's anxiety-inducing  undercurrents. So it matters little that  Erickson's novel, almost four years after the fact, harbours remnants of that initial naive enthusiasm. Because this is more about what we've become as who we elected, though, as the novel attests, the two can't really be separated.

These Dreams of You has been called the first Obama-era novel. Perhaps it is.  But it could also be called  the first pre-Occupy movement novel. Whichever, it seeks to bridge the gap between 2008 and the present. Consequently,  it addresses the disillusionment following Obama's election, which was, of course, based on hope rather than a program or a movement. At the same time, the novel attempts to keep those dreams alive even if there is little evidence that it might still be possible to do so.  To accomplish this legerdemain,  Erickson, as he has done so often before, delves into myths that bubble  under the surface of a nation teetering on the edge of a precipice. Myths we're  all suckers for,  if not victims of,  even if they contain no more than a kernel of truth.

Moving from  L.A. to London, Paris, Berlin and Addis Abada, Erickson's novel views race as central to the culture, whether by virtue of the man who occupies the White House,  through the music that has created  the culture or Sheba, the protagonist's four-year old, adopted Ethiopian daugther.  In doing so, Erickson embraces the dialectics of living in a post-race world (Van: "Ray Charles was shot down/but he got up to do his best").  All the time realizing that such an admirable a notion was probably premature, a false promise that, while heightening the debate, has revealed some ugly remnants that would destroy the body politic.

What I've always liked about Erickson is how his books are able to mix fact and fiction, reality and dream, subject and object. With overlapping narratives, the setting might move in time and place, but the specifics are always clear. Though not the only protagonist, the book revolves around Zan, a former novelist and pirate radio deejay, who looks on helplessly as the country as well as his life goes into economic free fall, and the world suddenly becomes evermore dangerous and inhospitable. Soon all he  has left is his family, a handful of dreams and memories, such as election night, 2008, which he compares with RFK's 1968 political campaign. Though Zan's house is about to be repossessed, his bank account is practically non-existent,  and his family about to be split apart, he manages to do what he can to salvage the situation, and maybe even find a sliver of hope for the future.

Of course, most are just a step away from being in Zan's situation. No wonder all such dreams have been deferred, if not, for some, extinguished. Says Erickson,  "...never has a president been heard so differently by so many, but what everyone now holds in common is what they don't hear anymore, which was his music that once so mesmerized them and now seems to have gone silent."  But isn't that the logical result of creating a facsimile of a movement? So what was once in the air- be it the radio waves that emanate from Zan's adopted daughter or his pirate radio program which played tracks from various cultures- has been silenced or made negligible. But despite his loss, Zan, in his craving for the music and what was once possible, pursues meaning in a country that, despite his love for it, is on the verge of destroying him.

But These Dreams of You raises another question: that  it's those who voted for the president as much as the president, who have changed, having succumbed to a flat-screen reality in the same way the president has succumbed to realpolitik and Wall Street. Proving that his campaign was simply an attractive advertising campaign in which someone appeared to be speaking truth to power.  As Van said in the song, "you said I was the one who had to reap what you did sow." But perhaps that goes with the territory. As These Dream of You illustrates, to move beyond that requires  a Sisyphus-like task that entails pushing a political boulder which more often than not moves backwards if it moves at all.

These are only a few  of the issues raised by Erickson in what is, finally,  a political novel that purposely refuses to offer a political analysis. But that should only be troublesome to those who don't believe the trite but true saying about the personal being  political and the political being personal. It hardly matters that Erickson's analysis veers off-track, or skirts various issues. Because These Dreams of You is less about down-in-the-dirt politics than the state of a nation in which there exists a thin line between dream and nightmare, and too much emphasis is placed on the singer and the song, when what really matters is the music, and where that music comes from.

Perhaps, Erickson is right: "failed writers should be something other than presidents."

Which is to say that along with Russell Banks' Lost Memory of Skin (which I'll write about at a later date), These Dreams of You is, for me,  the year's most important and provocative novel about the state of contemporary America.
Posted by Woody Haut at 11:35 AM No comments: