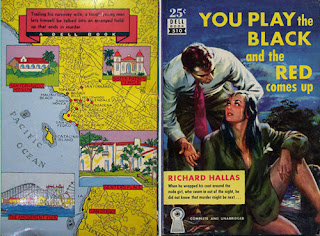 LOS ANGELES REVIEW OF BOOKS | Snappy and Reckless
My article on Eric Knight/Richard Hallas's You Play the Black and the Red Comes Up.
Posted by Woody Haut at 10:52 AM 2 comments:

Any musically conscious person who grew up during the 1950s and early 1960s will no doubt have Little Willie John embedded in their personal soundtrack of the era.  From the often-heard Fever and Grits Ain't Groceries to blues-soaked ballads like My Love Is and his ill-fated Capitol session, LWJ, with a remarkable range and soulful voice- Bobby Bland crossed Jackie Wilson, with some Jimmy Scott thrown in for good measure- was not only one of the best soul singers, but was the equal of, if not better than, most jazz singers, then or now. Moreover, John, who stood at 5'3", and looked younger than his years, produced some of his most memorable recordings while still a teenager.
In Fever, Veteran Detroit rock journalist (Creem magazine, Women of Motown) Susan Whitall, with  help from LWJ's son, Kevin, follows John from his early days on the streets of Detroit, through the ups and downs of his career, to the nightmare of those final days, including the controversial incident which led to his incarceration and, ultimately, to his death. In fact, stories of his drinking, drugs, bravado, confrontations and intermittent bouts of violence, only make John, who did his best  to stylize himself on Sinatra, even more complex and human. Though he sought a party wherever he went, John was also a family man. Yet in an era of unscrupulous promoters and racist attitudes, John wasn't about to be intimidated or ripped-off by anyone. Having interviewed family, friends and fellow artists, Whitall is perceptive not only about the music, but about the culture that created it, whether the migration of African Americans to find work in the north, which led to a vibrant Detroit club and music scene, or the stormy politics of the 1960s.
Of course it's LWJ's music that matters. And anyone reading this well-researched book will inevitably want to dig out  those old records and cds. Too bad in this age of YouTube there isn't any footage around of LWJ singing. But those recordings sounds as fresh and entrancing as they did when they first appeared. For me, Fever might well be the most interesting music biography I've read this year, and maybe longer.
Posted by Woody Haut at 1:46 PM No comments:

The End of Everything by Megan Abbott

These days there are so many varities of noir that it can be mind-boggling. Way back whenever, it was easy; the genre was pretty much  divided between urban and rural noir, while, with the exception of writers like Andrew Coburn, suburban noir hardly entered into it. Similarly, other than stories written specifically for the teenage market, not much noir fiction has centered specifically on children. What makes Megan Abbott's The End of Everything unique is that it's  set in suburbia and it's about childhood. Moreover, it affirms that both can be extremely dark places. After all, who knows what evil lurks behind those curtains. Likewise, who really knows what goes on in the mind of a child, particularly during what's commonly called the latency period, between childhood and adolescence, with its high-drama, longing, obsessions and confusion.

The plot of The End of Everything revolves around the disappearance of Evie, a thirteen year old, and is narrated by Evie's best friend,  Lizzie, herself on the  cusp of puberty, though not quite as precocious as her friend. Both are in awe of Evie's older sister, Dusty, a beautiful but hard-edged  seventeen year old. But Lizzie is also infatuated by Evie and Dusty's father. Distorted through Lizzie's view of things, the novel is, as the title suggests, about the end of childhood and the final days of that heightened and circumscribed state of awareness that accompanies it, terrifingly perfect,  to which one can never return.

Abbott has already been responsible for a handful of excellent novels- influenced by Hollywood film noir and set mostly during the mid-20th century- but I think this could be her best. At any rate, it's her most daring.  Reading it, I was reminded of the Swedish horror film, Let the Right One In as well as Rian Johnson's strangely evocative Brick. They, like Abbott's novel,  portray young people as existing in a world of their own, separate from adults, trapped in an in-between existence.  The only possible disconnect here is that the reader has to suspend disbelief when it comes to Lizzie, who, at thirteen, is able to articulate what isn't often articulated. Wearing her emotions as well as her misperceptions on her sleeve, Lizzie is particularly adept at describing  the physical, including her own body, which she regards with with fascination as well as dread. Fortunately, Abbott's prose is as seamless as it is fevered,  resulting in something that reads like a nightmare in which reality is flimsy yet hyper-real.  Accordingly, Lizzie's uncertainties are transferred to the reader.  Is the neighbor's father a perv? Is her mother's boyfriend the voyeur?  Is her friend's sister involved in an incestuous relationship with her dad? These are just a few of the mysteries that may or may not be revealed.

Actually, I'm not sure Picador, the book's British publisher, has the right line when it comes to marketing such an evocative and intelligent novel. Comparisons to The Virgin Suicides and The Lovely Bones are, for me, slightly wide of the mark. In fact, it sells The End of Everything short.  Because Abbott's novel is not only more believable, but  closer to the edge, while the other two are literary products, more concerned with presentation and style than substance. But even if I'm wrong, it still points to the fact that Abbott has entered a genre that still barely exists, no matter that young adults have been reading a version (Lois Duncan, Robert Cormier, S.E. Hinton, VC Andrews) for some time. Abbott's book might be set in suburbia and about childhood, but, by investigating obsession, sex and everything else associated with the unexamined life, it goes straight to the heart of what noir fiction is about, while, at the same time, helping to reset its parameters.
Posted by Woody Haut at 2:40 PM 2 comments: