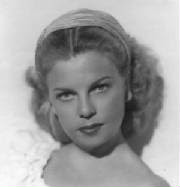 Mary Hauenstein, aka Marty Holland, aka Mary Holland, is best known for writing the novel and the story on which two classic examples of film noir are based: Otto Preminger's 1946 Fallen Angel, and Robert Siodmak's 1950 The File On Thelma Jordan. Both films feature two memorable noir femmes fatales: Linda Darnell in the former film and Barbara Stanwyck in the latter. Other than Fallen Angel (also published as Blonde Baggage, which French critics Mesplede and Schleret describe as Jim Thompson crossed with Barbara Cartland), Holland, from Beaverdam, Ohio,  who began her Hollywood career as a studio script typist, is credited with writing two other novels: The Glass Heart (also published as Private Passions) and Night Must Fall. In October, 1946, Kay Kirby announced in her Hollywood gossip column, Chatterbox, that Robert Montgomery was intending to adapt The Glass Heart,  but, instead, he chose to make Lady in the Lake, followed by Ride the Pink Horse.  Holland was no Chandler, nor prolific, like her friend Steve Fisher, but, with narratives that invariably feature a strong, sexy and and precocious female, she at the very least ranks with the likes of Dorothy B. Hughes as an important writer who, for one reason or another, inhabited the margins of Hollywood culture. Even though Holland changed her first name to make it sound more masculine, and therefore more acceptable to publishers, that certainly did not affect the sexual politics of her fiction, which, in many ways, was ahead of her time. In fact, it's likely that she changed her name because of the sexual politics of her fiction.

Baby Godiva was found in manuscript form by relatives following Holland's death from cancer in 1971. Here the femme fatale, if one can call her that, is Godie a sexually mature but emotionally-challenged fourteen year old, the daughter of an encrazed and abusive preacher. In this claustrophobic, 1950s southern town, Godie befriends Carly, an uneducated eighteen year old farm worker who works unceasingly for his drunken step-father. Accused of assaulting and raping Godiva, Carly is arrested. The extenuating circumstances soon become clear as the novel  moves from the young couple's strange friendship to the courtroom and beyond, focusing not only on Godie and Carly, but those connected to the crime. Holland's novel- "Kill a Mockingbird meets Lolita"- is about race and class as it manifests itself through the legal system, prison and capital punishment, and the prevailing attitudes of the era. Delving into the lives of not only Godie but the wife and mistress of the judge trying the case, it's also about the sexual politics of the time, the curse of beauty and how society can so easily manipulate the emotionally immature and uneducated. Though Baby Godiva might not be as tightly constructed as Fallen Angel and Glass Heart, it's a  more ambitious effort. This is a novel not only for those interested in forgotten Hollywood writers, but for those who like  fiction from an era when noir was  for real. Reading Baby Godiva I couldn't help but wonder  what Mary Holland might have gone on to write had she lived through the next wave of feminism that would arrive in the years following her death.