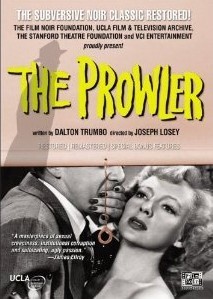 James Ellroy, in the documentary included with this DVD, calls Joseph Losey's1951 The Prowler "perv-noir." And he might well be right. From the opening shot of his long unavailable film-  Evelyn Keyes pulling down a blind after she notices a prowler looking at her through her bathroom window- the viewer is implicated in the film's voyeurism as well as its politics. Not only do we look at Keyes from the outside, just as any prowler would, but we are also meant to take a long hard look at America's materialistic post-WW2  culture. In that sense The Prowler is akin to, though more blatantly political than, that other paean to voyeurism, Powell and Pressburger's Peeping Tom.

The film was originally titled  The Cost of Living, and that pretty much sums up what the movie is about. As the Keyes' husband and radio d.j. voice ( the blacklisted screenwriter Dalton Trumbo who ghosted the script) says, "Good news. The cost of living is going down." Though ultimately it's not such good news for Webb, a rookie cop who hates his job and yearns for something better, played by Van Heflin, nor for Susan, played by Evelyn Keyes. Responding to Susan's call about the prowler, Webb takes one look at Susan and, sensing her loneliness, vulnerability and relative wealth, realizes the good life that he yearns for might be within touching distance. He figures all he has to do is ensnare her. This is a world of surface values and material objects.  On the other hand, Susan, trapped in a house filled with those objects, and a husband who is both impotent and domineering,  longs for something more and so falls easily and hard for Webb. This is a pre-Mad Men world where appearances are  everything, women are  kept in their place, everyone wants a piece of the post-war middle-class pie and are willing to do whatever it takes to get it.

The Prowler might also be as close as film noir gets to a perfect film, however minor its parameters. Made for Horizon  an independent studio, and produced by Spiegel and John Huston, it was released just prior to  the blacklist when noir could afford to be political and  sexually suggestive, just so it didn't contravene the Production Code.  It would also  be Losey's final American film before the blacklist brought him to Britain where, with the  exception of The Criminal, he would never return to the genre, nor make films  equalling the likes of The Boy With Green Hair, M, and The Lawless.

Losey, here assisted by the future director of Kiss Me Deadly Robert Aldrich, gets an outstanding, if unsettling, performance from Van Heflin, who plays a truly repulsive and amoral individual. His body language and gaze- sitting down in Keyes' living room without being asked, hitching his trousers, scratching himself, lustily checking out a woman checking into his hotel- convey menace, acquisitiveness and envy, his shallowness and boorish behavior betrayed in his every move. Keyes gives an equally remarkable performance, one of those actors able to alter her demeanor within seconds, going from homely to beautiful, from passionate to cold and clueless. Susan is multi-dimensional, not very intelligent, but at sea in her enclosed world. Mostly relying on studio interiors, Arthur Miller's photography is as claustrophobic as it is dark, pinning the two protagonists against a backdrop of socio-economic signifiers, or, according to critic Manny Farber, "hitherto untouched items like motels, athletic nostalgia, the impact of nouveau riche furnishings." But after various proscenium scenes of domestic upheaval, Miller opens every angle, making the desert too light and difficult to negotiate. All this helps Losey as he seeks to meld Ibsen and Camus with Brecht and James M. Cain, reaching a finale in Webb's escape attempt in which he takes an eternity to climb a towering sand pile. It's  two handful forwards, one handful backwards, in a nightmare that can only end in failure.

Yet every jewel has to have flaws, and here they come dressed as inconsistencies. Of course, Susan could have had an abortion when she discovers she's pregnant, though that would have been a no-go area as far as the  Production Code was concerned. However, why does Webb still have his badge after he has quite the police force? Or has he not heard the movie cliche about handing-in badge and gun. And, other than for its metaphorical and thematic value does Webb climb that huge sand pile instead of simply going around it? Or is that a kind of lateral thinking that poor Webb is incapable of implementing.

But these are minor points which only add to the film's Brechtian qualities. Finally, it should also be mentioned that the DVD comes with a documentary on the making of The Prowler that, amongst others, includes Ellroy, Denise Hamilton, Eddie Muller and Alan Rode, on the making of the movie, as well as a short film on the Film Noir Foundations work restoring film noir, and an interview with the always interesting Bertrand Tavernier who extols the virtues of the film and Van Heflin as an actor. In all this is a movie, and DVD package, that anyone interested in film noir, or for that matter  "perv-noir," will definitely want to see.
Posted by Woody Haut at 12:25 PM No comments: