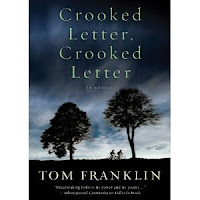 So far I think I've read everything Tom Franklin has published. To me he's one of the shining lights of contemporary fiction.  Though I have to admit that I didn't care much for his previous novel Smonk, though, of course, it could be a case that I just didn't get it. For me, it was readable and entertaining, but it was also mindlessly violent, which, of course, might have been the point; but, if so, so what? However, I'm glad to say that Franklin is definitely back to his best in Crooked Letter, Crooked Letter.  It's a literary crime novel that dares to venture outside the usual parameters of the genre. It is also, as the title suggests, a novel that deals with recent Mississippi history- the crooked latter referring to the spelling of the name of the state- in all its glory and degradation. As Dr Cornel West likes to point out Mississippi has given America some of its greatest artists- Robert Johnson, Muddy Waters, Jimmie Rodgers, Elvis, Charlie Patton, Faulkner, Eudora Welty, Tennessee Williams, Richard Wright, etc.. Today there are a surfeit of novelists from the state, not only Franklin, but late and lamented writers like Larry Brown and Barry Hannah. What they have in common is a deep knowledge of the landscape and its people,  the literary equivalent of  the Deep Blues that Robert Palmer describes in his book of that name. Accordingly, Broken Letter, Broken Letter not only portrays the relationship between the races, but, in doing so, investigates the way in which the past haunts the present and predicts the future. In a sense this these are concerns that other southern writers have examined, but not all that often within the context of a crime novel.

The story is set in rural Mississippi where two boys- Silas,  sports-minded and black, and Larry,  bookish, introverted and white- become friends. The former is brought up by his mother, while the latter belongs to an only child in a lower middle class family.  When, as teenagers, a white girl disappears, suspicion falls on Larry which, though he isn't charged with the crime, turns him into the town outcast. Meanwhile Silas moves away and comes back as the town's only law-enforcement officer. Then another girl disappears and, though years later, suspicion once again falls on Larry.

What some readers might not be so sure about here is the portrayal, now something of a cliche, that another bookish introvert is tagged as a potential killer. But Franklin plays with that cliche to great effect, while, at the same time, making sure  no one is one-dimensional, much less completely innocent.

Not only does the narrative, shifting from present to past and back again, never veer from its goal, but there are any number of poetic passages, like the following:

"When he left, Larry amid his machines, thinking of Silas, how time packs new years over the old    but those old years are still in there, like the earliest, tightest rings centering a tree, the most hidden, enclosed in darkness and shielded from weather. But then a saw screams in and the tree topples and the circles are stricken by the sun and the sap glistens and the stump is laid open for the world to see."
I don't know what it is about southern writers, but I seem to be reading more of them than ever: not just the likes of Franklin and Brown but William Gay and Tim Gautreaux, not to mention my recent foray into the world of Peter Taylor. But read Tom Franklin's Crooked Letter, Crooked Letter. You won't regret it.
Posted by Woody Haut at 4:27 PM No comments: 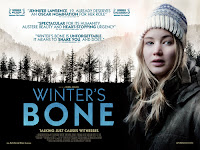 I've read and liked just about everything Daniel Woodrell has  written. Winter's Bone might be his finest book; but, then again, maybe not. Because they're all very good.  But, then, I'm a sucker for regional writers, especially those from the south or anything about the southern mountains. However, it's not Daniel Woodrell that I want to write about.  It's Debra Granik's adaptation, which I finally got around to seeing (better late than never), and was so impressed by.  Jennifer Lawrence as seventeen year old Ree is magnificent, as is John Hawkes who plays her uncle Teardrop. There are few if any films that portray Ozark culture, much less portray it so well. There are many touching moments in the film, not least a birthday party that Ree crashes to get information about the whereabouts of her father.  A group musicians play a mountain tune, while the camera fixes for a very brief moment on the mantel piece. Amongst other  photograph there's one of a son or nephew, in military gear, no doubt serving in Iraq, Afghanistan or maybe even the first Gulf war. And, of course, these people portrayed in Woodrell's book(s) and Granik's film are the very people who fight our wars and die for our country, these people who don't  know how to back down, who are so private and clannish, who are forced through circumstances to manufacture and sell drugs culture, and can only get a job or an education by joining the military.  They are also the same people who take the blame when anything goes wrong in the military, because they are the ones who are in the foreground, who put themselves in harm's way, who carry the can. Not the Rumsfelds or the Bushes or the Patraeus's  But Ree can't even join the military because she has to fight a battle to keep her family together. If you haven't seen this film yet, by all means do. And don't forget Daniel Woodrell's novels, because they are all right up there with Winter's Bone.
Posted by Woody Haut at 4:06 PM No comments:

The Better Angels by Charles McCarry

I've written before, if briefly, about Charles McCarry's Better Angels (Overlook Press), but at the time I didn't give it the attention it deserves. McCarry is one of the best writers of spy fiction around. He's also the king of the backstory.  In fact, I'd say 50% of Better Angels is backstory, but he manages it so seamlessly that you barely notice. It's also a novel that when published in 1979 must have been classified at the time as speculative fiction; but reading it thirty-two years later, it's not so far fetched at all, and hardly speculative. A liberal president has been elected, having deposed a incumbent right-wing, charismatic Republican who created a prison-industrial complex and something close to a police state. The latter is trying to get back into the White House. Meanwhile, the Arab world, through its oil, has a stranglehold on the west. The liberal president issues the order to assassinate  an Arab leader when he learns that the latter is about to hand over a nuclear weapon to a radical Islamic group. To protest the assassination, suicide bombers become an ever present threat.

So far, so interesting. But McCarry is above all an excellent novelist, with an eye for detail and character. In fact, his characters never fail to be complex and interesting. This is the third novel I've read by him and, though I've been impressed with the other two, I would say so far this is his best. A former undercover Cold War intelligence officer operating in Europe, Africa and Asia, McCarrry knows what he's talking about. This might account for his early knowledge of computers, environmental politics and urban problems. Plus there's the matter of a rigged election.  McCarry even portrays- thankfully, still in the real of speculation- the imprisonment of children whose DNA might indicate future anti-social behavior and prison camps for dissenters in Alaska. On the other hand, he can't be faulted for not foreseeing  the collapse of the Soviet Union. McCarry is every bit as good as Le Carre (I think there's an Gaelic-French pun there somewhere).  Now I've got to get hold of the McCarry titles I've yet to read.
Posted by Woody Haut at 12:01 PM No comments: