"A curious document, this journal, whose carefully chosen words sketched out only the outer shape of people, events, and ideas: a poem constructed of gaps cut from the lived material, because- since it could be seized- it could not contain a single name, a single recognizable face, a single unmistakable strand of the past, a single allusion to assignments accomplished (about which it is forbidden to write without prior permission). No expression of torment or sorrow (this for the sake of pride), no expression of doubt or calculation (for the sake of prudence), and nothing ideological, naturally, for ideology is the sludge at the bottom of the pitfall... [The] construction of this featureless record, similar to a thought puzzle in three dimensions turned entirely toward some undefinable and secret fourth dimension, had furnished her with an exhilarating occupation..."
Posted by Woody Haut at 4:45 PM 1 comment:

"San Francisco seems to have always had a peculiarly salubrious climate for personal journalism, the occasional essay, the intimate column, from Bret Harte and Ambrose Bierce to Fremont Older and John D. Barry, it’s a great tradition. Today the papers are full of them, excellent, good, bad and indifferent. They are not now and never have been, these columnists, all of them sensationalists. Even the gossipiest ones have never been as invidiously gossipy as some elsewhere in the country. A lot of them have purveyed, between the lines, a lot of wisdom and light."

So wrote Kenneth Rexroth in his very first column for the San Francisco Examiner. The excellent Bureau of Public Secrets website, to celebrate fifty years since their original appearance, is running every column written by Kenneth Rexroth for the San Francisco Examiner from 1960-67. As one would expect from Rexroth, they cover a range of topics. Though at the time I remember wondering why Rexroth, given his politics, would write for a Hearst publication. But then there have been stranger journalistic marriages, such as Beaverbrook and Michael Foot in the UK. I'm looking forward to going back over Rexroth's columns, some of which I read when they were published, even though I steadfastly refused to ever buy a copy of the paper. Maybe one day we can also look forward to someone reprinting the columns of Ralph J. Gleason from the San Francisco Chronicle. Less literary and with no reputation other than in the jazz and Rolling Stone world, Gleason's columns would be a more accurate picture of the era. I remember someone asking at a Left Coast Crime conference in Monterrey, which San Francisco journalist best typified the hardboiled tradition. The panel agreed that it had to be Herb Caen, who also wrote for the Chronicle. I thought, Herb Caen? You've got to be joking. What about Gleason? He shared a column with the renown jazz historian Phil Elwood, not only modelled himself on Hammett, but was the consummate outsider, on the periphery of any number of San Francisco concerts, literary events, film showings, etc., during the era.

I remember nearly running Ralph down in my Yellow Cab just outside Winterland on my very first night on the job. Herb Caen? Until I looked him up just a few minutes ago, I never even knew what the guy looked like.

Though I suppose that's pretty hardboiled in itself. On the other hand, I crossed paths with Rexroth on numerous times, whether on one of my various trips to Jack's Record Store on Scott Street, just below Rexroth's apartment, or the class he taught at SF State. My father had known Rexroth back in Chicago and would listen to him read from his autobiography on Pacifica Radio, and for the rest of the day would talk about the friends they had in common.
Posted by Woody Haut at 9:41 AM No comments: 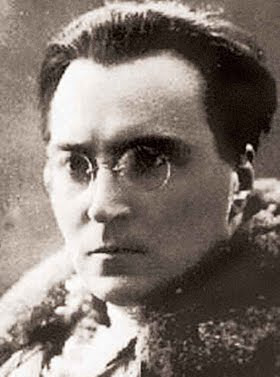 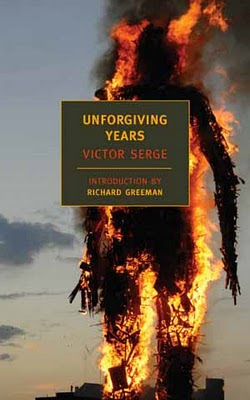 Unforgiving Years by Victor Serge (NYRB) must be the most profound and modernist spy novel of the 20th century. Serge was born in poverty in Brussels in 1899 to émigré Russians after fleeing the Czar. He became a political activist, was jailed and arrived in Russia in 1919 to support the Bolshevik Revolution. Climbing the hierarchy of the Comintern, he fell foul of Stalin, went to prison, followed by his exile from the Soviet Union. Unforgiving Years would be Serge's final novel, destined, as far as he was concerned, for the bottom drawer. And you can see why. It's his darkest and most extreme book. Paranoid, unrelenting, brutal, poetic, surreal, hallucinatory, the book moves from pre-war Paris to Leningrad under siege to Berlin during the last days of the war to Mexico (this last part reads like a B. Traven story). Serge's translator, Richard Greeman, in his informative introduction, suggests that D, the main character, is based not only on Serge himself, but a defector, actually the head of Stalin’s apparatus who met with Serge in Paris, Walter Krivitsky, died in a hotel room in Washington under mysterious circumstance, as well as another Soviet agent, Ignace Reiss, who, in the process of defecting to Trotskyism, was murdered by Stalinist agents on his way to meeting Serge in Switzerland. In a sense, one might say that Serge's novel is antidote to Celine, at least so far as the depiction of the horrors of war is concerned. Translated into English for the first time, Unforgiving Years tells the story of two revolutionaries, D and his friend Daria, as they approach, endure and survive World War II. Earlier Serge writing is quite different in style and content, and definitely less modernist in orientation. I would also recommend The Case of Comrade Tulayev (reprinted by NYRB as well), about the reign of terror in the Soviet Union. Like Unforgiving Years, it was one of his last books, and one that Serge did not seek to publish during the latter years of his life. Unforgiving Years is the real thing, the sort that the likes of Alan Furst would die for. If anyone thinks latest batch of post-apocalyptic novels, like The Road, are bleak, they should try this one.
Posted by Woody Haut at 9:02 AM 2 comments:

Is there a more amazing opening sequence than that in Sam Fuller's Naked Kiss (Thanks to Howard Rodman for reminding me of this):

Then there's Park Row, with that great opening shot and filled with some terrific tracking shots and long takes. A tribute to the early days of journalism made with Sam's own money. But Fuller would turn in his grave if he knew the state of newspapers today. Unfortunately this is the only extract of the film I could find: 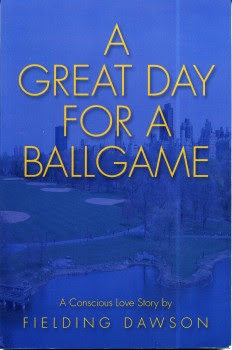 At his best, he was one of the truly great American writers.

Posted by Woody Haut at 1:24 PM No comments:

Prompted by Charles Simic's blog for the New York Review of Books, let me say that I'm all for a Buster Keaton revival.

Somebody once called Buster the Charlie Poole of silent films. Or maybe it was the other way around, and someone once called Charlie Poole the Buster Keaton of string-band music. Some of my favorite Buster moments are those where he's riffing like a jazz musician with Fatty Arbuckle. But I like everything, at least until Buster began to talk.

For all Busterites, as well as anyone interested in L.A. history, go out an buy a copy of John Bengston's Silent Echoes: Discovering Early Hollywood Through the Films of Buster Keaton. A work of true urban archeology, perhaps the sort of thing that Mike Davis should have perused before writing City of Quartz. 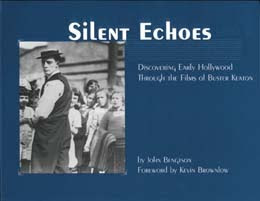 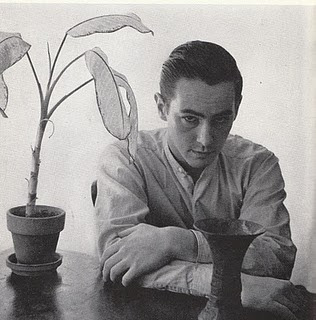 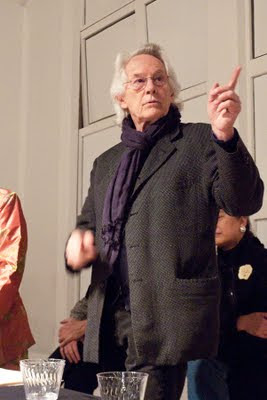 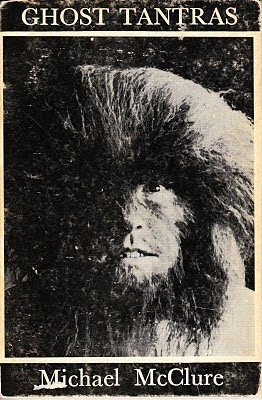 Seventeen Reasons Why This Guy Loves San Francisco poet Michael McClure.
Posted by Woody Haut at 11:00 AM No comments:

Nice to have him back, with a great version of Robert Johnson's Me and the Devil. Not to mention the visually stunning video. Watch it in tandem with the previously posted version by Rainer Ptacek posted on January 9th. Then go back to the original version by Robert Johnson: 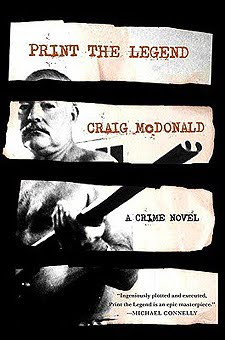 Once again, Craig McDonald covers some tricky territory, though this time it's more circumscribed than in his previous outing, which crossed a number of continents as well as decades. Though Print the Legend moves about a bit, it is, for the most part, set in Hemingway's hometown where a literary conference celebrating the great man is taking place. Okay, so there are few subjects potentially more tedious than a narrative about a bunch of critics gathered together at a literary conference. But, hey, why not; after all, we know that critics can be a cut-throat bunch, and here they are that with a vengeance.

But point is, McDonald once again pulls it off. Because Legend is much more than mere David Lodge-noir. Here we're on the cusp between modernism and post-modernism, between Hemingway or the pulp-literary fiction of McDonald's protagonist, Hector Lassiter, and something about to appear on the horizon, whether in the guise of feminism or metafiction. While deconstructionism was not, as portrayed in Legend, in vogue amongst critics in the mid-1960s, it still packs a punch and puts one in mind of the Gramsci quote, something along the lines of "the old world is dead and the new world has yet to be born."

The plot of Print the Legend (the title of course comes from Ford's The Man Who Shot Liberty Valance- "When the legend becomes fact, print the legend.") revolves around stolen and fake Hemingway manuscripts, and the possibility that Mary might have murdered Hem. Trailing Hemingway, as well as Lassiter is a renegade FBI agent-novelist based on spook-writer E. Howard Hunt (Hunt wrote several novels and even received a Guggenheim in 1946 for his pulp spy and crime fiction). While I found the link between Hemingway and J. Edgar somewhat tenuous, we do know that Hoover did have a file on Hemingway that went back to the Spanish Civil War, as well as on the likes of Hammett, Dorothy Parker, Tennessee Williams, EB White, Faulkner, Steinbeck, Dreiser, Mailer, etc., etc..

I have to admit that Print the Legend didn't grab me straight off. It took about a hundred pages before I was really into it, at which point I was hooked and found myself looking forward to reading about the weird but ultimately tragic, Mary Hemingway, Hector and the various spooks and critics, both synophantic and competitive, who would as soon bury Hemingway as explicate him. Though there are some uneven spots early on, and it's neither as complex or labyrinthine as Toros and Torsos (which Hector is apparently writing in the latter stages of Legend). Likewise, it lacks the latter's scope and scale. Nevertheless, the last section of Legend is every bit as intense as anything in Toros. I like McDonald's ambivalent approach to Hemingway, and it's impressive that he can get so much mileage out of the great man, using him as a launch pad to examine the culture and particular epochs. And, as I've mentioned before, McDonald is one of the few writers who can move comfortably within a post-Ellroy framework of historical crime fiction, prompting at least this reader to go back to some of his sources. Always interesting and, in the end, engaging, I'll be interested in where he goes once his Hemingway period has been exhausted.
Posted by Woody Haut at 3:21 PM No comments: